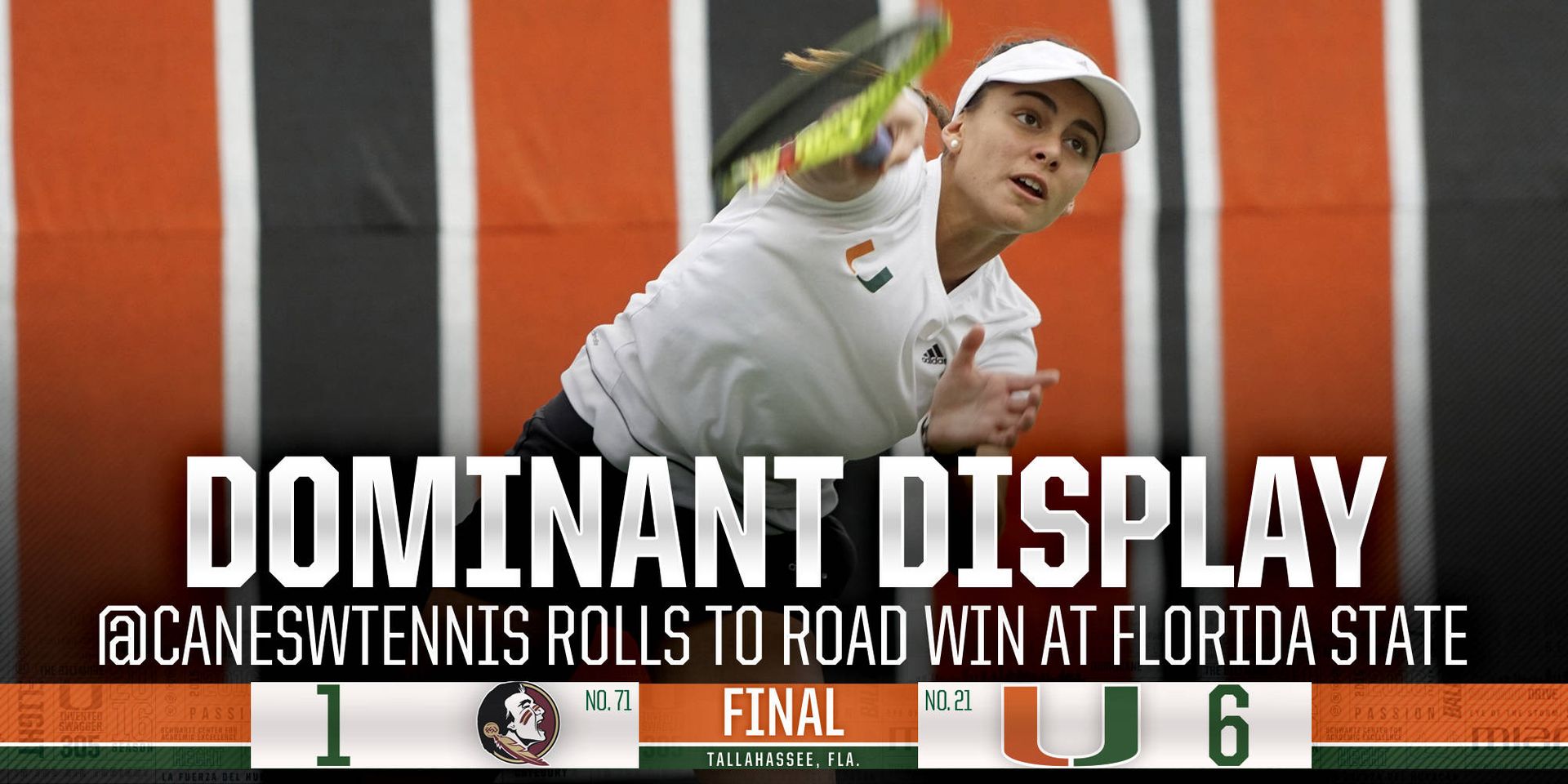 TALLAHASSEE, Fla. – The University of Miami women’s tennis team put forth a tremendous showing Tuesday afternoon at No. 71 Florida State, earning a 6-1 victory over the Seminoles.

No. 21 Miami (5-4, 2-2 ACC) won five singles matches in straight sets at the Scott Speicher Tennis Center to move to 33-6 all-time against Florida State.

“We played well top to bottom without our number two player in the lineup,” Miami head coach Paige Yaroshuk-Tews said.

Sophomore Silvia Fuentes and senior Clementina Riobueno got Miami off to a strong start in doubles, posting a 6-2 victory over Gabriella Castaneda and Julia Mikulski of Florida State (7-5, 0-3 ACC).

Sophomore Sinead Lohan and freshman Clara Tanielian clinched the doubles point for the Hurricanes in impressive fashion. Down 5-6, the duo forced a tiebreaker, which they won, 7-3, to take the match and give Miami the 1-0 lead.

Senior Stephanie Wagner and sophomore Wendy Zhang, the No. 11 pair in the nation, were ahead 4-1 in tiebreaker against Daneika Borthwick and Yukako Noi when doubles play ended, leaving them three points shy of a victory.

The Hurricanes won five first sets in singles play, grabbing hold of all the momentum in the match. They then got all three victories they need to earn the victory in fairly quick succession.

First, No. 73 Zhang locked up her first career No. 2 singles win in stellar fashion. She cruised to a 6-1, 6-0 victory against Borthwick, who finished last season ranked No. 90 in the nation.

Freshman Ana Madcur then made it 3-0 Hurricanes with an impressive win of her own, topping Daniela Schippers, 6-1, 6-1.

“Madcur stepped in and played a tough match,” Yaroshuk-Tews said. “I’m happy to see her not only win, but dominate today.”

It was Wagner, ranked eighth in the nation, who clinched the win for Miami. The Amberg, Germany, native defeated Noi, 6-2, 6-3, to seal the victory.

The remaining matches were played out despite the result being determined and the Hurricanes continued to take on to their lead. Tanielian took down Rahmanparast, 6-2, 6-3, to make it 5-0 in favor of Miami.

Despite trailing in the second set, Fuentes came back to take her match in straight sets, 6-3, 6-4, over Mikulski. The Seminoles earned their lone victory of the day with a 7-5, 6-1 win by Castaneda over Riobueno.

Miami will be back in action Sunday at 10 a.m. when it hosts No. 31 Notre Dame at the Neil Schiff Tennis Center in Coral Gables, Fla.

To keep up with the University of Miami women’s tennis team throughout the 2015-16 season, follow @CanesWTennis.