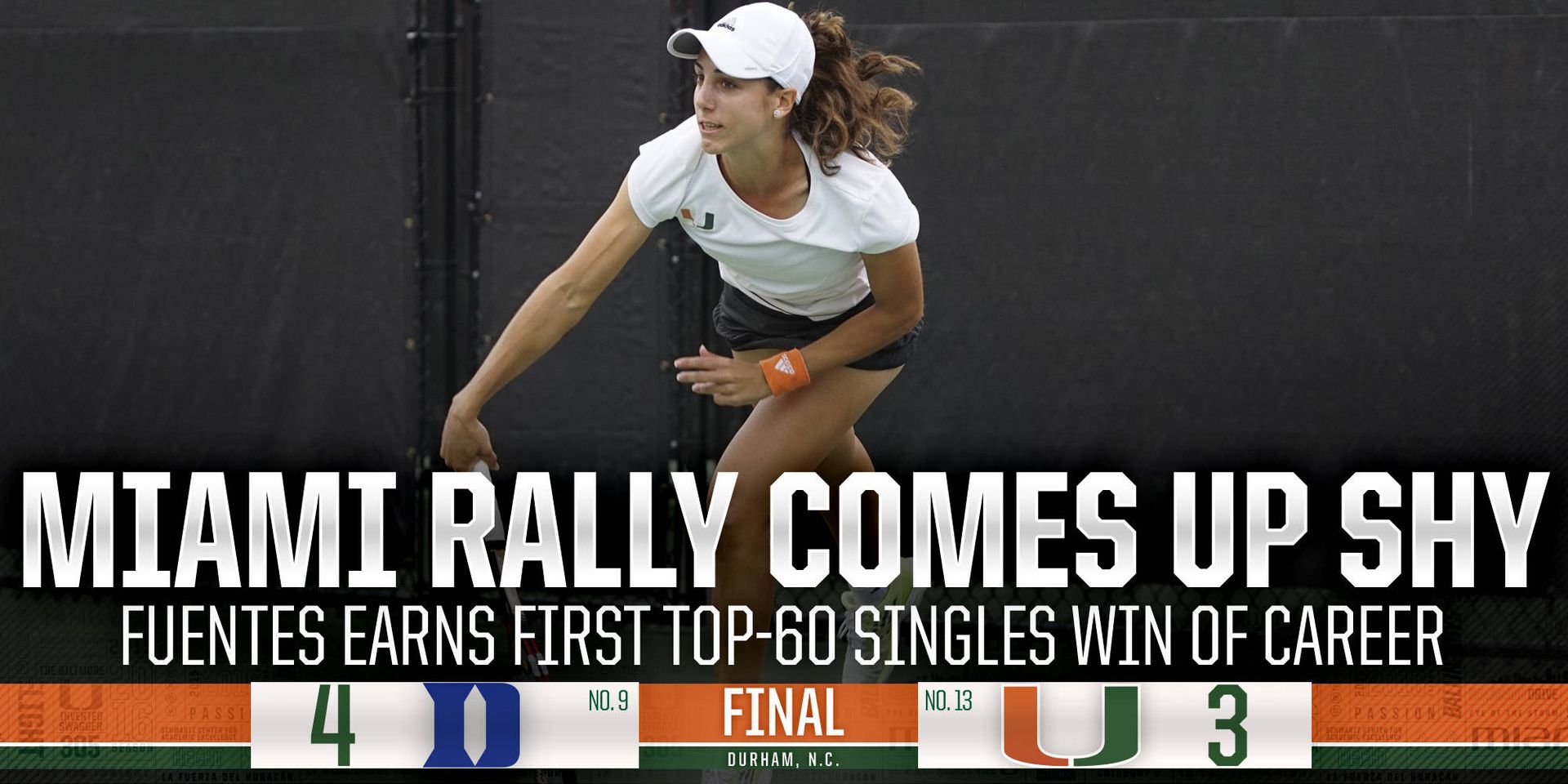 @CanesWTennis Drops 4-3 Result at No. 9 Duke

DURHAM, N.C. – The No. 13-ranked University of Miami women’s tennis team battled back after falling behind 2-0 on the road at ninth-ranked Duke Sunday afternoon, but ended up just short in a 4-3 defeat at Ambler Tennis Stadium.

“It takes four points to win a college tennis match. A 4-3 L is truly no different than a 4-0 L in my book,” Miami head coach Paige Yaroshuk-Tews said. “We are all in this together and right now we are not all in.”

Duke struck first in doubles action as the No. 17 pair of Beatrice Capra and Ellyse Hamlin topped the No. 11 pair of senior Stephanie Wagner and sophomore Wendy Zhang, 6-2. Senior Clementina Riobueno and sophomore Silvia Fuentes dropped their doubles match to Duke’s Chalena Scholl and Alyssa Smith 6-3.

When doubles play was suspended, the Miami pair of sophomore Sinead Lohan and freshman Clara Tanielian led 5-4 against Kaitlyn McCarthy and Samantha Harris and the match was left unfinished.

After dropping the first round of singles play to Harris, 6-3, Zhang came out to a strong start in the second round taking a 3-0 lead. Despite her quick start, Harris battled back and took the match 6-4.

Miami’s second point of the day came in dramatic fashion from Fuentes. After coming up short in the first set against No. 59 Hamlin, 6-3, Fuentes dominated the final two sets to win the match, 3-6, 6-0, 6-1. Hamlin is the highest ranked opponent Fuentes has beaten in her career as a Hurricane and it is her second victory over a ranked opponent.

“Silvia had a solid weekend in singles, but needs to be more coachable on the doubles court,” Yaroshuk-Tews said. “She’s practicing better and it’s carrying over.”

“I am so happy with the weekend that Lohan and Wagner had,” Yaroshuk-Tews said. “They need to keep pressing forward and being the rocks of this program. Hopefully their teammates decide to get on the bus soon.”

Tanielian fell short to Christina Makarova, 6-4, 6-4, which gave Duke its fourth point over the Hurricanes to close match.