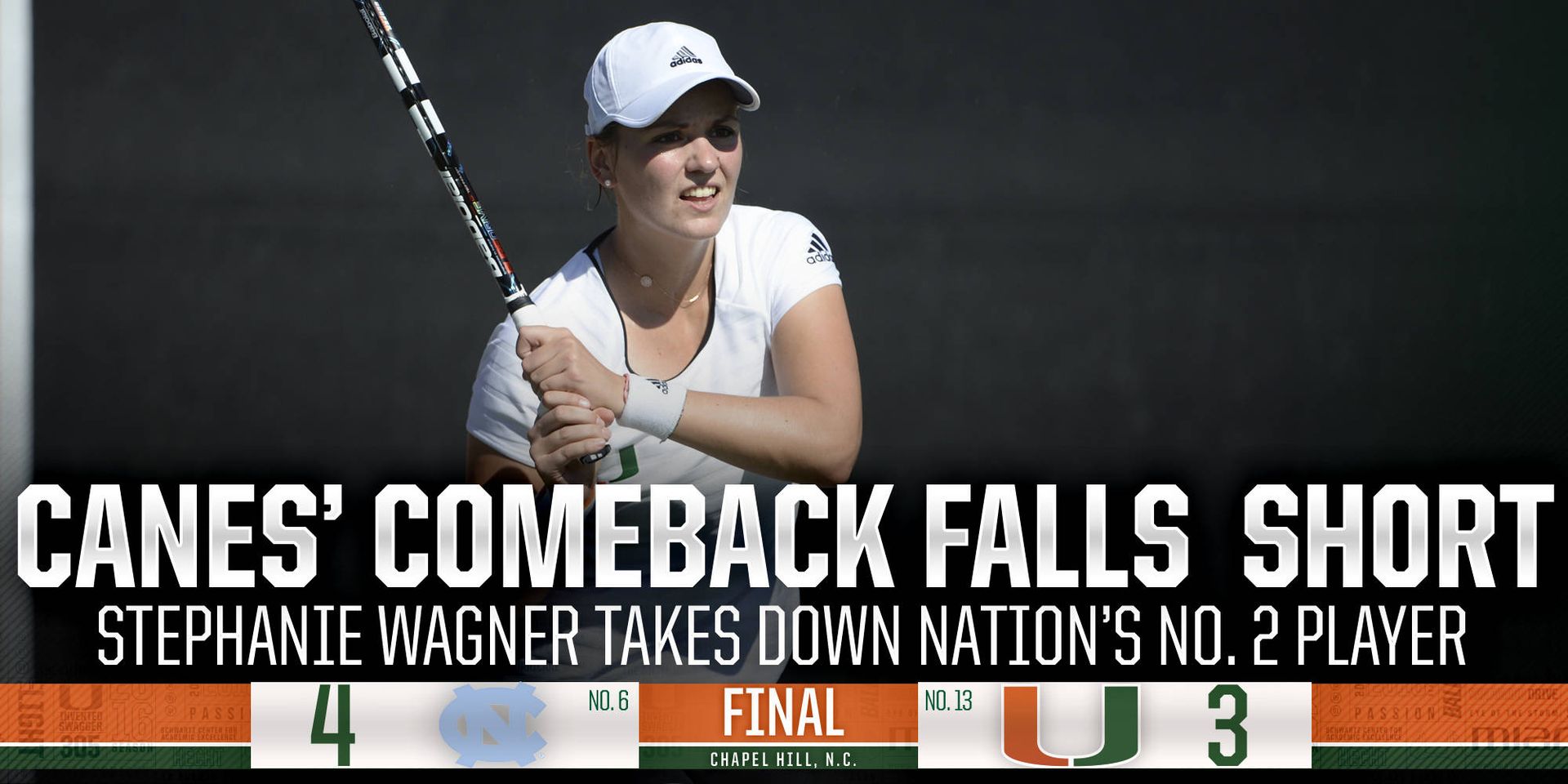 CHAPEL HILL, N.C. – The University of Miami women’s tennis team stormed back from a 3-0 deficit on the road at sixth-ranked North Carolina Friday night, but its rally came up just shy in a 4-3 defeat.

Despite the defeat, senior Stephanie Wagner picked up one of the biggest wins of her illustrious career, topping the second-ranked player in the country, Hayley Carter, 7-6 (10-8), 0-6, 7-5.

No. 13 Miami moved to 4-3 (1-1 ACC) on the season, with all three of its defeats coming against teams in the top eight of the Oracle/ITA team rankings.

“Proud of the way we fought tonight, tough one to lose,” Miami head coach Paige Yaroshuk-Tews said. “Nights like this require everyone to play relentless tennis and we were just a little short in that regard. Unfortunately, it cost us the match.”

Miami answered almost immediately with a victory from sophomore Sinead Lohan and freshman Clara Tanielian over No. 31 Jessie Aney and Kate Vialle, 6-3. The win was Tanielian’s first as a Hurricane over a ranked opponent in either singles or doubles.

The Tar Heels earned the doubles point with a 6-3 victory by Ashley Dai and Chloe Ouellet-Pizer against Silvia Fuentes and Clementina Riobueno.

Fuentes posted an impressive comeback against Marika Akkerman to pull Miami within one. The Ciudad Rodrigo, Spain, native dropped the first set and then opened the second with a 5-0 edge en route to winning 12 of the final 16 games. She took the match, 3-6, 6-1, 6-3, to make the score 3-2.

Ouellet-Pizer clinched the match for North Carolina with a three-set victory over Tanielian. A game away from defeat in the second set, Ouellet-Pizer came back for a 5-7, 7-5, 6-3 win to give the Tar Heels the win.

“Tanielian started fighting cramps up 5-3 in the second and really wasn’t able to recover,” Yaroshuk-Tews said.

Despite the match being determined, Wagner and Carter played out the remainder of their top-10 showdown. After narrowly winning the first set with a 10-8 tiebreaker victory and then dropping the second set, 0-6, Wagner trailed 4-5 in the decisive third set.

From there, Wagner won three games in a row to hand Carter her first loss of the spring and just her third in 30 completed matches in 2015-16. The Amberg, Germany, native earned her fourth-straight win against a top-15 opponent, two of which have come over players ranked second nationally.

“Steffi Wagner played pro-level tennis tonight and took down one of the best competitors in the country,” Yaroshuk-Tews said. “Once again, an amazing showing from her.”

The Hurricanes will play their second-straight top-10 opponent Sunday at 12 p.m. when they take meet ninth-ranked Duke in Durham, N.C.

“We need to have a short memory and get ready for a really good Duke team Sunday,” Yaroshuk-Tews said.

Live stats for Miami’s match against the Blue Devils will be available HERE and premium live video can be found HERE.