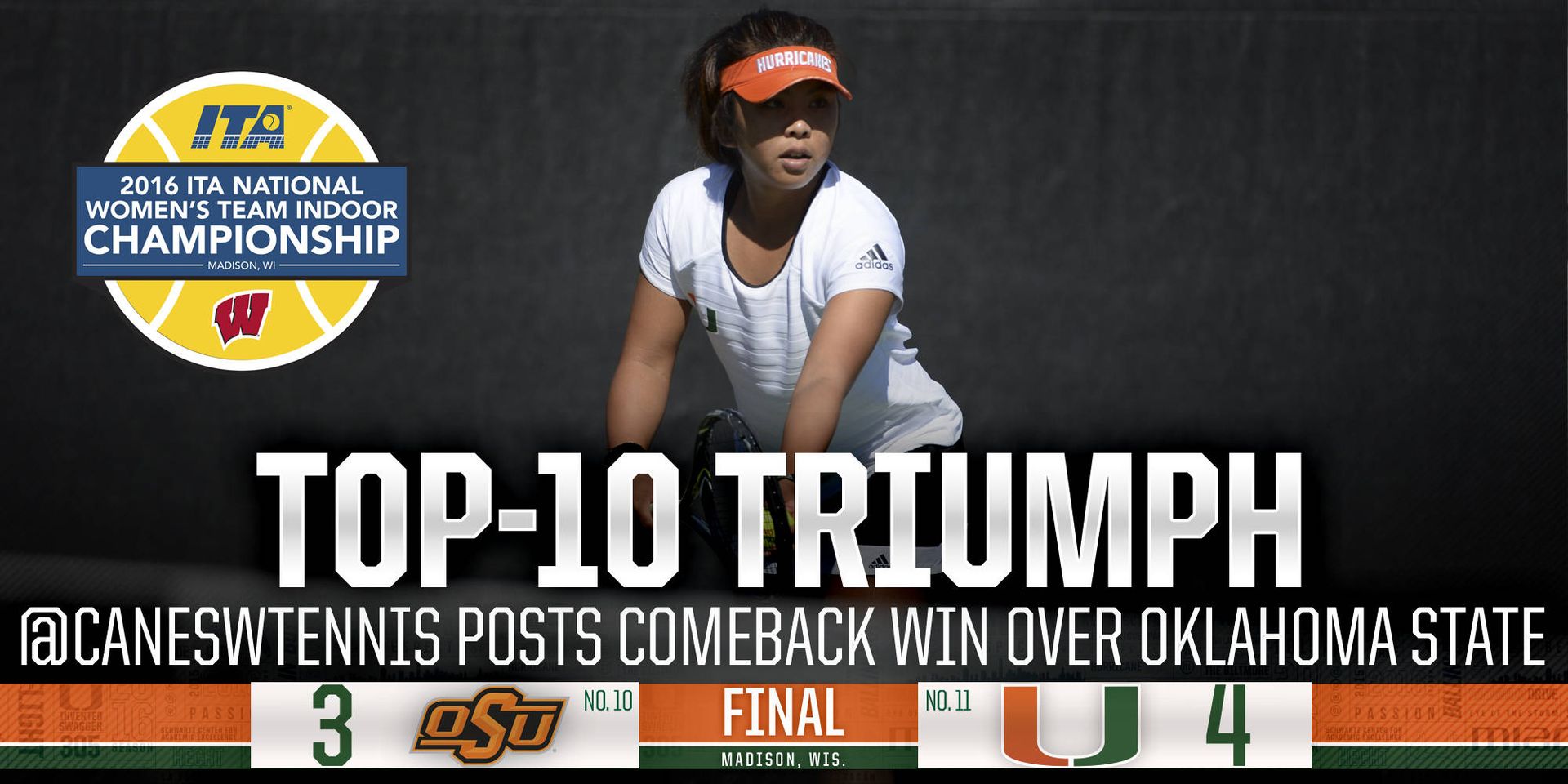 @CanesWTennis Knocks off No. 10 Oklahoma St.

Oklahoma State (7-2), seeded sixth in the tournament, held leads of 2-0 and 3-2, but seventh-seeded Miami would not be denied. The Hurricanes won a trio of three-set singles matches to come away with the victory at Nielsen Tennis Stadium.

“There is such a big difference between working hard and having the will to die on the court to win points,” Miami head coach Paige Yaroshuk-Tews said. “We worked hard our first two matches [at ITA Indoors, but] today we were dying for points. This is expected. The more it becomes habit, the more time we can spend coaching tennis and nothing else.”

Senior Stephanie Wagner and sophomore Wendy Zhang got Miami on the board first in doubles, dominating ninth-ranked Kelsey Laurente and Maria Alvarez, 6-2. However, the Cowgirls came out on top in the last two doubles matches.

Two of the singles matches finished quickly, beginning with Riobeuno falling to No. 46 Lushkova, 6-1, 6-1. Ninth-ranked Wagner then got Miami on the board, trimming the Hurricanes’ deficit to 2-1 with a 6-1, 6-1 win against No. 27 Adamovic, marking her second top-30 win of the spring.

Seventh-ranked Lohan dropped the first set to No. 38 Babic, but then put together a comeback in dominant fashion. The Waterford, Ireland native won 12 of the final 14 games to take the match, 2-6, 6-2, 6-0, and claim her third top-40 win of the spring.

After Lohan evened the match, the Cowgirls pulled back in the front with a 6-2, 6-4 victory by Tur Mari over Fuentes.

The Hurricanes needed to win both remaining matches to earn the victory and did just that. Both Tanielian and No. 80 Zhang claimed three-set triumphs to give the Hurricanes the 4-3 result.

“We are a better team than we were Friday,” Yaroshuk-Tews said. “The process is why coaching is great, but we need to continue moving forward.”

Miami will be back on the court Feb. 15 at 11 a.m. when it hosts No. 15 Baylor at the Neil Schiff Tennis Center in Coral Gables, Fla.