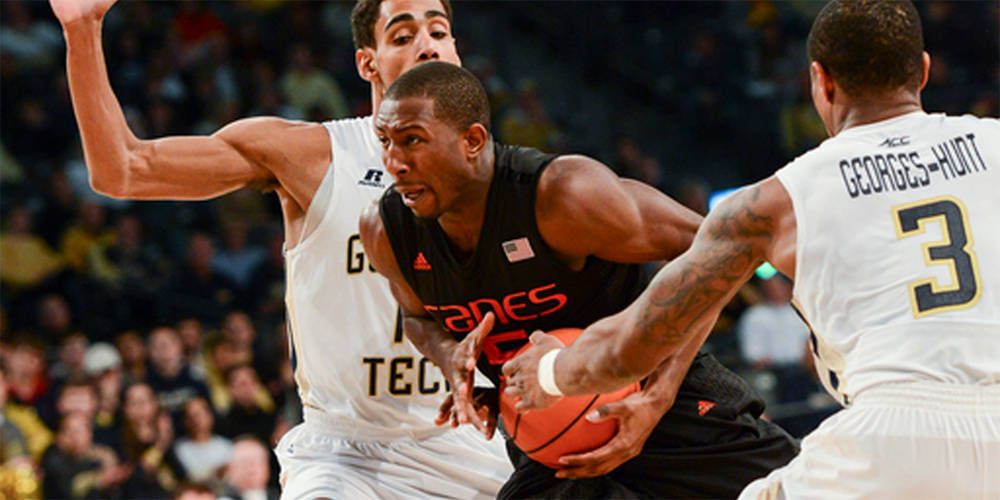 ATLANTA (AP) — With Miami clinging to a three-point lead and the shot clock running down, Ja’Quan Newton had no choice except to throw up a towering shot from the corner with a Georgia Tech player right in his face.

Sheldon McClellan scored 22 points, but Newton’s 3-pointer while falling out of bounds was the shot that carried the 17th-ranked Hurricanes to a 75-68 victory over hard-luck Georgia Tech on Sunday.

Especially Charles Mitchell, who ran at Newton right as he launched it with 1:49 remaining.

“I was basically hugging and kissing him,” Mitchell said, shaking his head. “Plays like that, they’re just pure luck.”

In a game that was tight all the way, the Hurricanes (18-4, 7-3 Atlantic Coast Conference) needed a shot like that to hold on for their fifth win in six games. Newton’s basket made it 66-60, and Georgia Tech didn’t get closer than four points the rest of the game.

“It was the dagger,” Newton said.

Georgia Tech (12-11, 2-8) lost another tight one in the ACC, keeping the heat on embattled coach Brian Gregory. All eight of its conference defeats have been by less than 10 points, little consolation to a program that has struggled throughout Gregory’s five-year tenure.

Marcus Georges-Hunt scored 19 points to lead the Yellow Jackets before a sparse crown at McCamish Pavilion.

“Every time you win on the road in the ACC, it’s a good win,” McClellan said. “No matter who it’s against.”

The margin was never more than seven points, but Miami tenaciously led throughout the second half after being up 33-32 at the break.

The Yellow Jackets came in as one of the nation’s top rebounding teams, but Miami held its own in the lane. Georgia Tech managed just a 31-30 edge on the boards and got little production out of its big men, tumbling to its sixth loss in seven games. Nick Jacobs and Charles Mitchell were held to eight points apiece.

Davon Reed had 15 points for Miami, while Newton finished with 14 and Kamari Murphy chipped in 10. The Hurricanes connected on 15 of 21 at the free throw line, making all but two of 14 attempts in the second half.

McClellan kept up his trend of getting stronger as the game goes on, scoring 13 points over the final 20 minutes.

McClellan is Miami’s undisputed leader, but he sure doesn’t act like it.

The senior guard took only nine shots, fewer than two of his teammates. He made seven.

Miami: McClellan came into the game with the eighth-best shooting percentage (.527) among guards. He improved on that by making 7 of 9 from the field. … The Hurricanes improved to 12-8 in its series against Georgia Tech and 5-2 under coach Jim Larranaga. … Point guard Angel Rodriguez has 23 assists and just three turnovers over the past three games.

Georgia Tech: Dropped to 1-5 against ranked teams this season. … Made only 9 of 16 free throws, including a crucial miss by Jackson on the front end of a 1-and-1 with 1:07 remaining. … The Yellow Jackets had been outrebounding their opponents by an average of 7.6 per game, ranking third in the ACC.

– The Hurricanes turned the ball over only six times, compared to 14 for Georgia Tech. The six turnovers were the fewest by Miami in a game this season.

– Miami held a 33-32 lead at half at McCamish Pavilion. The Hurricanes improved to 16-1 when leading at halftime this season.

– After shooting just 3-for-7 from the charity stripe in the first half, Miami shot 12-for-14 in the second half and finished 15-for-21 for the game.

– Sophomore Ja’Quan Newton had 14 points on 5-for-11 shooting. It was his 18th game scoring 10+ points this season after posting only four such performances a rookie in 2014-15.

– Junior Kamari Murphy totaled 10 points on 4-for-5 shooting, marking his second straight double-digit performance. His 10 points were one shy of his ACC high (11), set last time out against Notre Dame (Feb. 3).

“I thought that was a very well-played college basketball game. I just quickly glanced at the stats [and] Georgia Tech shot 50 percent from the field and 50 percent from three and we still won the game. I think we were very fortunate. I thought our guys hung in there and did some good things down the stretch, but we got out rebounded again – only by one this time. But we know that’s an area of our game that we need to really improve to play against the high caliber teams that we’re facing in the ACC.”

“We’re a good free throw shooting team. We shot pretty well today [but] I don’t think we weren’t great at 71 percent. We actually average about 75 percent on the season.”

How do you describe Ja’Quan Newton’s three-pointer in the final two minutes?

How were you so successful scoring in the paint?

“That’s a key. We were 4-for-12 from three [and] we like to shoot about 16 threes, but we didn’t make any in the first half. So we did a little better job in the second half, 4-for-8. That’s about right for us. We want to get to the foul line more and if we can get to the foul line we are confident that our free throw shooters will make them.”

Was Sheldon McClellan’s performance today something you expect?

“The kid is great. He just doesn’t know how good he is. He took nine shots today [and] he was 7-for-9. If I shot as well as him, I would have taken 20 shots and probably still would have only made seven. He’s so unselfish. He’s so team-oriented. He’s a great teammate. He’s a great guy to play with and a terrific young guy to coach. I just love having him in our program. He’s a fun kid to be around and I think he’s going to play at the next level. He’s so athletic. He’s fast. He jumps. He’s quick. He can defend. He makes threes. He makes twos. He makes free throws. He makes layups. He’s got a great game. He loves the second half. We ran a play for him to start the second half to see if we could get him going early and he buried a three right in front of me, like 25 to 30-feet from the basket.”

Did you defend Nick Jacobs differently in the second half?

“We didn’t do anything different than what we had planned. We know that Charles Mitchell and Nick Jacobs are really a force down inside. They both have those dynamic jump-hooks, Nick Jacobs to the left and Charles Mitchell with his right hand. It’s hard because they’re constantly screening for their guards, so your guards are chasing all over the place. The bigs kind of have to help each other and I think our guys did that. Jacobs only had eight and Mitchell only had eight, so that’s a real credit to our four and five men.”

“I thought a couple of key aspects that kind of changed the game in the second half that let them pull away was their ability to put the ball on the floor and make some plays off the drive. Obviously, (Sheldon) McClellan and (Davon) Reed both played exceptionally well for them today. They’re a great, experienced team that kind of played at the same pace the whole game and just waited for us to either make some mistakes on offense or for us to have some breakdowns on defense, and just kind of extended the lead. That’s what they did in the first run, and we responded pretty well to that. Then they did it again later, and I thought we responded well again. There are a couple of timely free throws that we need to put in, and when you’re battling a top 20 team and you have a chance with three minutes to go and it’s a one-possession game, you have to do a couple different things. When you get fouled, you need to go to the free throw line and make them, and you need to make a couple stops there. We were close to getting that one stop, and obviously the shot goes in at the buzzer from the corner. That was a big play for them. They’re a very good team – a very talented team at 18-4 now and a top 20 team. We did a better job of rebounding the ball in the second half, but our defense throughout the game – to have them shoot 49 percent is a little too high for us to try to be successful.”

On struggles with turnovers and free throw shooting

“Here’s what happened – for the first time all year long – I don’t know if this is exactly true, but you guys can check it – I can’t remember us having more turnovers than assists. That’s not who we are. We’re one of the lowest turnover teams in the country, and we have 14 turnovers in this game. You could probably get away with that if you go to the free throw line and make your free throws, but you can’t combine those two. That was the big difference in the game, because you’re talking, again, a possession game – a one-possession, two-possession game.  You can’t have empty possessions either at the free throw line. As you said, we were two-for-nine during that stretch, and two of them were front ends of one-and-one. Those are just empty possessions that – you’re playing against one of the better defensive teams in the league, and you’re shooting 50 percent from the field and 50 percent from the three. When you get fouled you need to capitalize on that. Unfortunately, we weren’t able to do that. Again, that puts so much pressure on your defense where you need to be near-perfect defensively. When you’re playing against a team with 22 years of college experience in the starting lineup, it’s going to be difficult to be near-perfect defensively for an entire half.”

“It’s a strange world out there. We got 10 offensive rebounds – five of them team rebounds, meaning that the ball’s knocked out of bounds. But we scored 15 second-chance points. You’ve been around – we’ve had games where we get 16 offensive rebounds and have eight second-chance points. So we capitalized better on it. One of the things that we’ve worked on and I think we’re getting better at – when we get an offensive rebound and if we are swarmed or walled up, especially in this game with (Tonye) Jekiri, we’ve got to kick the ball out. We did a better job of that and got some threes because of it. I thought that’s something that we’ve tried to emphasize over the last couple weeks, and we’re getting better at that.”