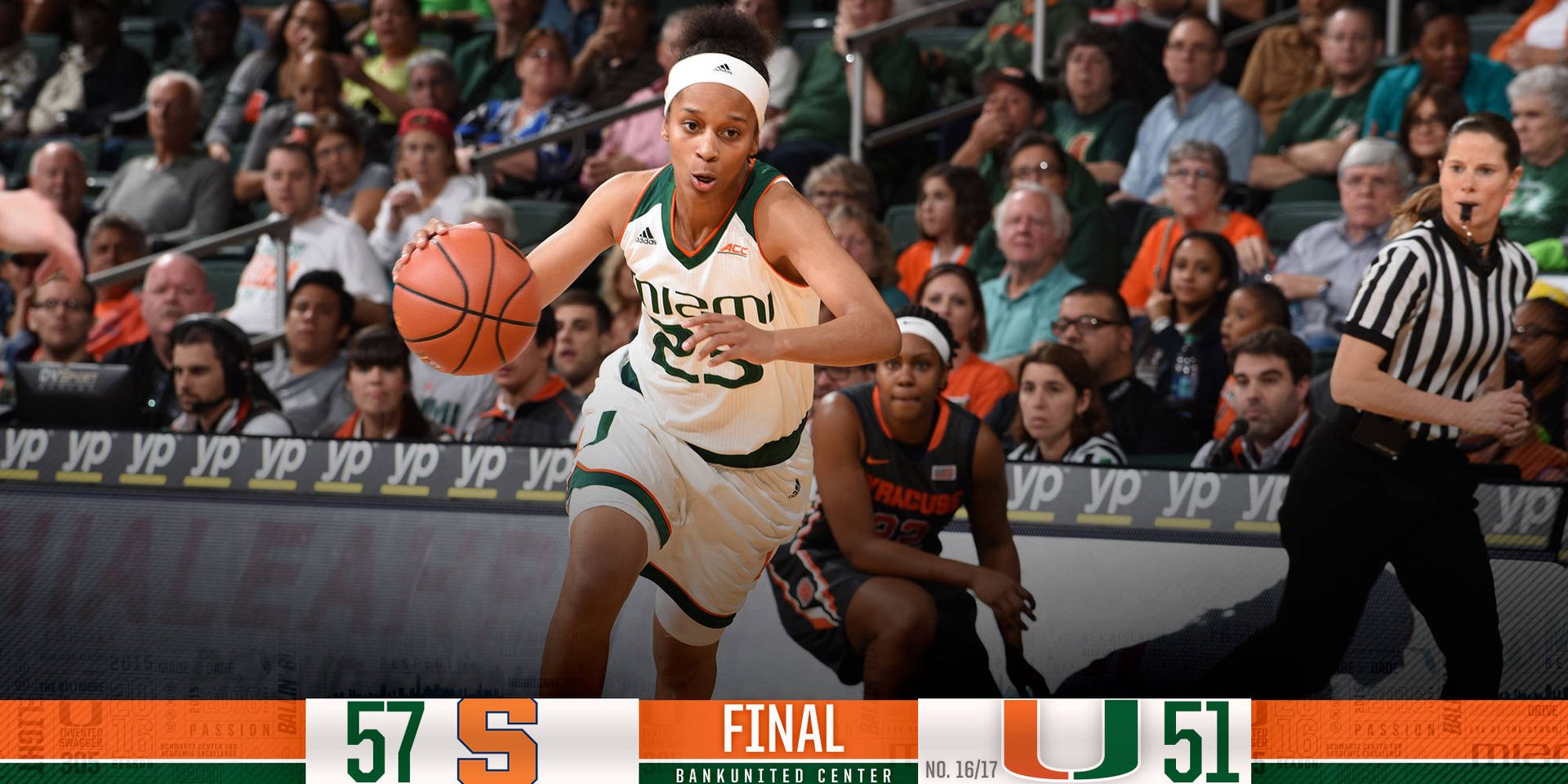 “Syracuse is a top-25 team whether they’re in the polls or not,” Miami head coach Katie Meier said. “They have played a great schedule and they are very, very good.”

In the second session, Miami went on a 7-0 run while forcing the Orange into eight-straight misses. Junior guard Jessica Thomas capped the run with a 3-pointer to even the score at 22 with 3:05 left in the first half.

Syracuse picked up its play offensively down the stretch and would go on to take a 30-24 lead into the locker room.

After the Orange extended its lead to eight to begin the third quarter, Motley took over for the Hurricanes. The Newport News, Va., native scored seven-straight points in under two minutes to pull Miami within one.

The run would not end there for the Hurricanes, though. Back-to-back 3-pointers by freshman guard Laura Cornelius helped Miami take the lead and the Hurricanes extended it from there. Overall, it was a 15-4 run by the Hurricanes that included nine points by Motley and gave them a 39-36 edge with 59 seconds left in the period. A bucket by Syracuse to beat the buzzer made it 39-38 with 10 minutes remaining.

Down by four with three minutes to go, forward/center Emese Hof scored a basket and then Cornelius connected on a pair of free throws to even the score at 49 with 1:13 to go, drawing a roar from the crowd.

After being held scoreless for three minutes and 25 seconds, the Orange scored with 45 ticks remaining to take a lead it would not relinquish. Hof and Cornelius, both freshmen from the Netherlands, scored the Hurricanes’ final eight points, but it was not enough, as Syracuse shot 5-of-6 at the free throw line over the final 32 seconds.

Miami sophomore forward/center Erykah Davenport led all players with eight rebounds, her third-most this season and her top total since grabbing nine at Loyola Chicago Nov. 21, 2015.

Junior guard Alexis Peterson paced the Orange with 16 points, though Miami held her to 5-of-15 shooting (33.3 percent) from the floor. The Hurricanes also limited senior guard Brianna Butler, Syracuse’s second-leading scorer behind Peterson, to nine points on her fourth-lowest shooting mark of the season, 15.8 percent (3-of-19). Senior guard Cornelia Fondren added 10 points for the Orange.

Miami will return to the court Thursday night at Conte Forum in Chestnut Hill, Mass., when it takes on Boson College at 7 p.m.

·         The all-time series between the Hurricanes and Orange is now 18-8 in favor of Miami. The road team has won each of the last six meetings not played on a neutral court.

·         Thomas has tallied 12 rebounds over the past two games after grabbing 11 total boards in the previous three outings (3.7 average).