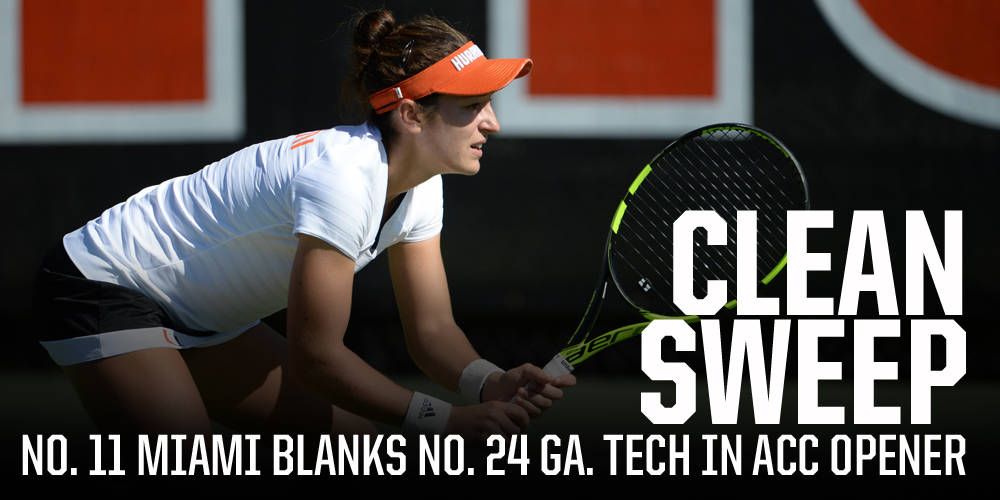 @CanesWTennis Shuts out No. 24 Georgia Tech

No. 11 Miami (3-0, 1-0 ACC) earned the doubles point in tight fashion and then cruised through singles, dropping just one set. The Hurricanes have now won 7-0 in their first ACC match in each of the past three seasons.

“It was nice, that was great,” Miami head coach Paige Yaroshuk-Tews said of starting ACC play with a shutout win over a top-25 opponent. “I told the girls that I was very happy with everybody just responding to us making a change in the lineup pretty last minute, not even skipping a beat and just going with it. I think it just says a lot about where the girls are maturity-wise.”

With all eyes turned to court three, sophomore Silvia Fuentes and senior Clementina Riobueno clinched the doubles point for Miami with a 6-3 win over Rasheeda McAdoo and Alexis Prokopuik.

It did not take long for the Hurricanes to clinch the victory in singles play. Zhang, ranked No. 80, made it 2-0 with a 6-0, 6-2 victory over Woodard and Fuentes followed that up with a tremendous effort against Prokhnevska. The Ciudad Rodrigo, Spain native did not even concede a game, posting a 6-0, 6-0 win.

Lohan, playing at the No. 1 position for the sixth time in her career, sealed the deal for the Hurricanes. The nation’s seventh-ranked player, Lohan downed Hourigan, 6-4, 6-2, to give Miami the win.

Soon after, freshman Clara Tanielian picked up a 6-2, 6-1 victory against Prokopuik. For Tanielian it was her first appearance in a dual match in her career and the win came at the No. 4 spot in the Miami lineup in the aforementioned switch Yaroshuk-Tews touched on.

Madcur won a first set tiebreaker and then went on to defeat Anton-Ohlmeyer in straight sets, 7-6 (7-2), 6-3. Wagner, ranked ninth in the country, played the lone three-set match of the day on court two against No. 92 McAdoo.

“The girls played really well today. From top to bottom, they played well,” Yaroshuk-Tews said. “Clara came in and played a super-disciplined match, which we’ve been stressing with her a lot. To come in and play in our first ACC match and to dominate that way shows a lot of maturity from her. We’re getting the job done down at five and six.”

The contest against the Yellow Jackets marked the first time a women’s tennis match at the Neil Schiff Tennis Center has been broadcast live on ESPN3.

The Hurricanes will be back in action Feb. 5 in Madison, Wis., when they open play at the ITA National Team Indoor Championship.