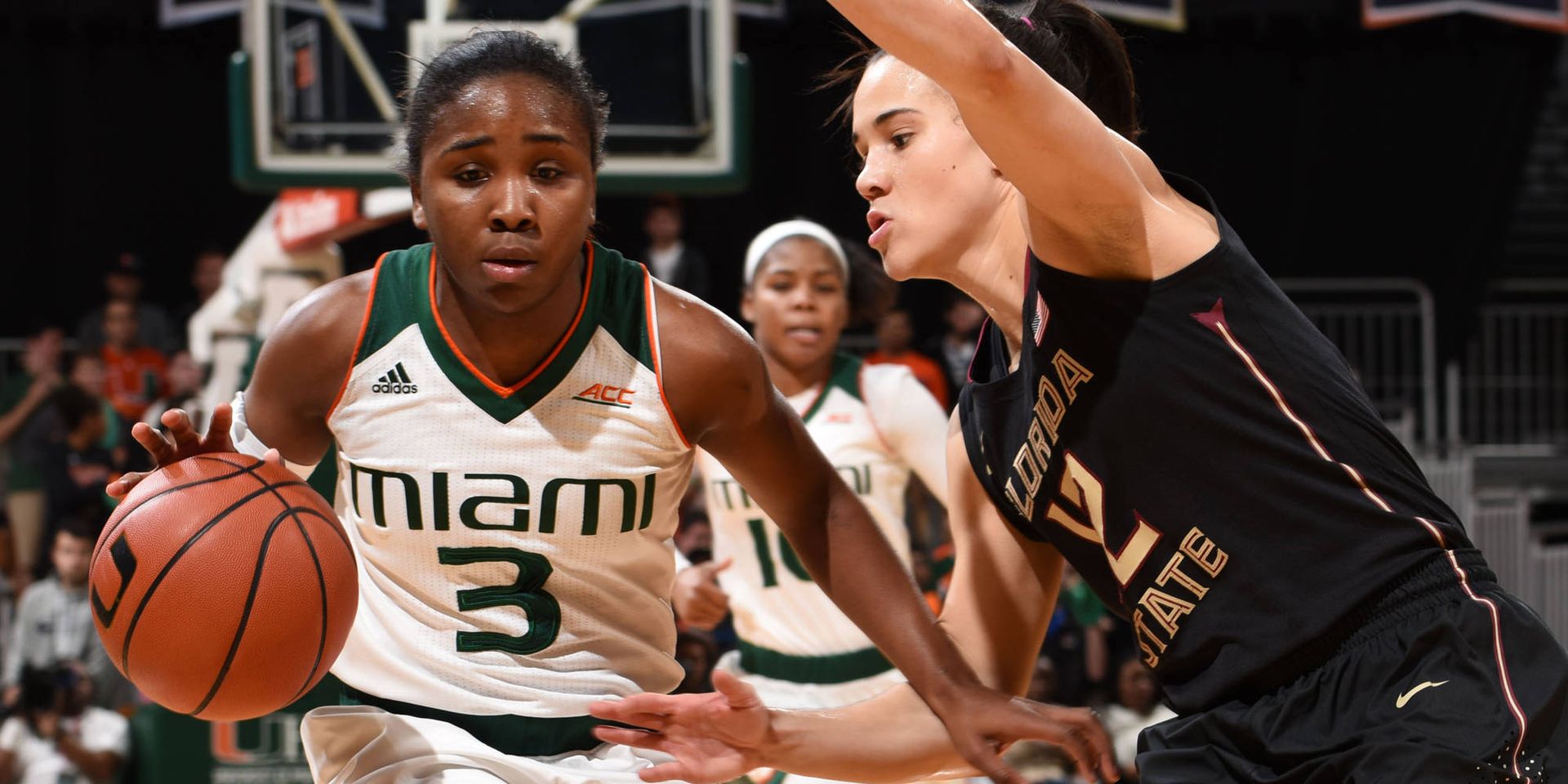 No. 16 @CanesWBB Falls to Florida State

CORAL GABLES, Fla. – The University of Miami women’s basketball team dropped a home game for the first time in 2015-16, as No. 14/13 Florida State came away with a 69-58 win at the BankUnited Center.

Playing in front of its second-largest home crowd of the season, including a record-breaking number of students, No. 16 Miami (17-3, 5-2 ACC) was led by a game-high 20 points from junior guard Adrienne Motley. Redshirt junior forward Keyona Hayes added 18 to go along with a team-high seven rebounds. The pair combined to shoot 14-of-26 (53.8 percent) from the field.

“It was a great crowd. I think it was a good basketball game,” Miami head coach Katie Meier said. “It was kind of a grind-it-out game. Each team knows the other and each team was taking away what the other wanted to do, so we had to go to our second and third options. They hit some really tough shots. You got to give them credit.”

After a seesaw opening to the game that included back-to-back 3-pointers by Motley, Florida State (16-4, 6-1 ACC) closed the first period on a 10-2 run. The surge gave it a 17-12 advantage through 10 minutes of action.

After the Seminoles scored the first point of the second frame to make it a lead of a half dozen, Miami countered. The Hurricanes held Florida State without a point for four minutes and nine seconds while going on a 7-0 run to take a 19-18 lead with 6:04 left before the break.

The Seminoles responded by taking a three-point lead, Miami then put up another run, this time scoring eight-straight points to go ahead by five, 29-24, with 1:32 left in the first half. Put together, it was a 17-6 run for the Hurricanes.

A strong close to the session by Florida State sent the teams into the intermission even at 31. Hayes led all scorers with 12 points at halftime, her most in a half this season. Motley added 10 points of her own in the opening the 20 minutes.

Florida State scored the first six points of the third quarter and the two sides then exchanged points the rest of the session. The Seminoles took a 49-43 edge into the final period of play and extended their lead to nine, 58-49, with 5:13 to go.

Miami then pulled within five on a 3-pointer by Motley that made it 60-55 with 2:23 on the clock. However, the Hurricanes could not get any closer and the Seminoles held on for the victory.

“I’m not devastated by any stretch of the imagination,” Meier said. “I just hated our last five minutes of that basketball game. We’re playing at home, we get them on the ropes a little bit and then they hit that three with one second on the shot clock. It seemed like we couldn’t answer that. We got to understand what Miami basketball is all about and get better.”

Miami will be back on the court Thursday night in Blacksburg, Va., when they face the Virginia Tech Hokies at 7 p.m. at Cassell Coliseum.

·         This was the second time this season Miami has set a new program record for student attendance. The previous top mark came vs. Illinois (12/2/15).

·         Hayes scored in double figures for the seventh time this season, including the third time in the last five games.

·         Hof’s eight free throws attempted eclipsed her previous career best of seven (vs. Indiana, 12/20/15). Hof also made multiple free throws in an ACC game for the first time, as she connected on four shots from the line.

·         Erykah Davenport logged multiple assists in an ACC game for the first time in her career.