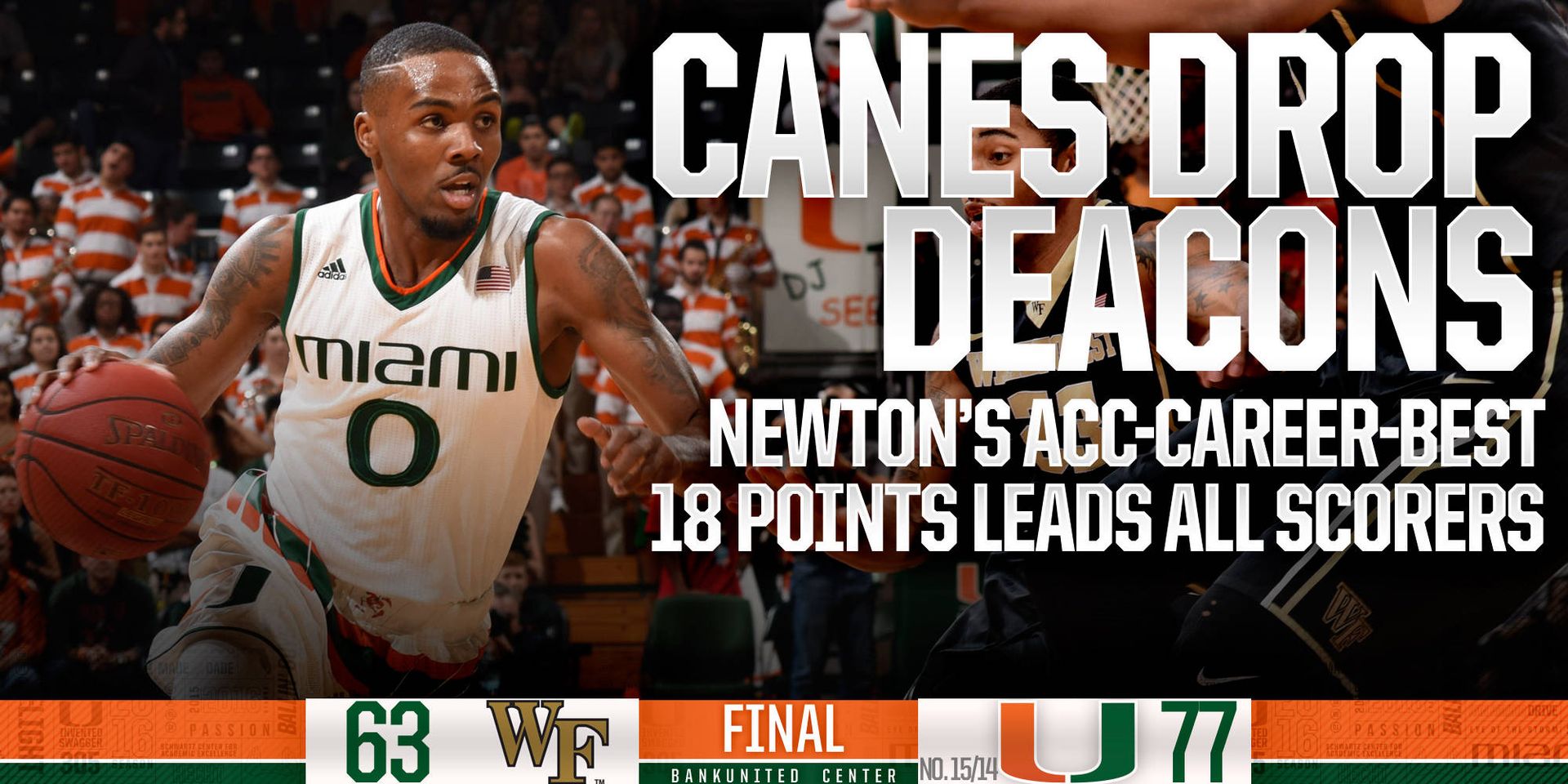 CORAL GABLES, Fla. (AP) — Reserve Ja’Quan Newton scored 18 points and No. 15 Miami overcame a flurry of misses in the paint to beat Wake Forest 77-63 on Saturday.

Miami missed 11 layups and two dunks but pulled away by clamping down defensively and making 14 of 15 free throws in the final 10 minutes.

While the Hurricanes struggled inside, they shot 24 for 28 (86 percent) from the free throw line, outscoring the Demon Deacons there by 13 points.

The Hurricanes held their largest lead of the first half at 31-20 before Wake Forest outscored them 13-4 in the final 3 1/2 minutes to trail only 35-33 at halftime.

Wake Forest: The Deacons shot 6 for 18 from 3-point range. They had been 4 for 38 in the previous two games.

Wake Forest: hosts No. 13 Virginia on Tuesday at 7 p.m. The game had been scheduled for Monday but was postponed because of this weekend’s snowstorm. It will be Wake Forest’s third consecutive game against a ranked team.

-It was the seventh time in Miami’s 10 home games this season that the Hurricanes trailed for fewer than 5 minutes. Out of 400 minutes played at home this season, Miami has trailed for only 73 minutes, 4 seconds, or 18 percent of the time.

– Miami pulled down 20 offensive rebounds, the most of the 2015-16 season. Previous high was 15 against UTRGV.

– Newton recorded his 14th double-digit scoring game of the season. Miami is 13-1 when he scores at least 10 points.

-Angel Rodriguez is now one of only three active Division I players with at least 1,200 career points, 450 assists, 180 steals and 150 3-pointers. (North Carolina’s Marcus Paige, whose team next plays Sunday, is one steal away from being the fourth on this list.)

-It was the 15th time in Angel Rodriguez’s Miami career that he recorded at least three steals in a game. Miami is a perfect 15-0 in those games.

-Miami did not have a double-digit scorer until Angel Rodriguez’s layup with 8:57 remaining. The Hurricanes had eight players in the scoring column at that point, six of them with at least six points.

Opening Statement…
“What I like about [Sheldon McClellan and Ja’Quan Newton] in particular, they’re very upbeat. They really enjoy playing with each other. I thought they both were instrumental in today’s game. I think the biggest difference was that our bench was very, very good today. We had 18 points from Ja’Quan, but also seven crucial points from James Palmer and then Ivan Cruz Uceda had a good game as well. Our defense in the second half was the difference. In the first half, they shot 48-percent overall and 40-percent from three. In the second half, they shot 31-percent overall, 30-percent from three and 54-percent from the foul line.

“That kind of defense is what separated us when the score was 48-48…they didn’t get as many easy baskets as they had gotten throughout the game. Our defense tightened up, we finished strong offensively and we made all of our free throws, and we kept them off the foul line. They’re a team that normally shoots 27 free throws, and they were 11-for-18. That is one-third less, and that’s really important to our defense, to keep people off the foul line.”

On the missed layups and dunks in the first half…

“The good news is we ended up scoring 77 points. We could have had 90. The games we’ve played in conference play have been much slower than this one, so there was a little bit of an adjustment. I think our guys are more comfortable in that 75-85 point range. Our defense still kept them in the 60’s, so it was a good home court win.”

On if the coaching staff had to focus the team on Wake Forest and to not look ahead to Duke…
“None. We didn’t mention Duke. These guys know everybody in our league is good. We talked about the talent Wake Forest has, the job Danny Manning has done building his program. They beat us last year at their place. They outran us. We needed to make sure we understood we were going to have to out-run them this year.”

On what the team did once the game was tied 48-48, when Miami pulled ahead…
“I think we just got stops. In the second half we came out with a little more energy, which we have to do a better job of from the get-go. Like Coach always says, we have spread ability, so I think that’s what happened.”

On if the game against Wake Forest went the way the team expected…
“Definitely…up-tempo game. We gave up too many transition points that we shouldn’t have given up, so we’re thankful to come out with a win. But we go out with the win, and that’s all that matters.”

On what the team did once the game was tied 48-48, when Miami pulled ahead…
“I think our defense and our energy just stepped up. Our energy was there, then we got stops and that led to fast breaks and open dunks.”

On if playing the song ‘Don’t Worry, Be Happy’ during the week made a difference for the team…
“A little bit. It’s a good song. It is the right mindset we need – be happy.”

Opening Statement…
“I thought the biggest swing in the game came when it was tied 48-48. Miami stepped on the gas and created some separation from us, and we couldn’t keep up. I thought in the first half we did some decent things defensively. We held them to a decent field goal percentage, but we were still down – you kind of look at the second-chance opportunities, offensive rebounds and our turnovers. We came out in the second half and like I said, once it hit 48-48 they stepped on the gas and we weren’t able to keep up…a lot of different reasons [for the loss], but namely offensive rebounds and turnovers.”

On closing the half on a 13-4 run and cutting the deficit to 35-33 heading into the locker room…
“I think we obviously guarded them better in the first half than we did in the second half. Yeah, they probably missed some shots that they normally make, but that’s how it goes. If we can put together two halves like we did in the first half – just with that type of attention to detail defensively – we’d be a lot better off.”

On if Miami did anything to surprise his team…
“There are no secrets in this league. There’s too much technology for that.”

On Miami coach Jim Larrañaga saying the team’s conference record doesn’t reflect its talent…
“That’s very nice of him, but we’re 1-6 [in the ACC] and that’s the only thing we can look at right now. We have to be much better to win. We know that the league that we play in, night in and night out, it’s going to be a beast. It’s the best league in college basketball. But we still have to find a way. We have to put two halves together and we really haven’t done that yet. Miami is playing very good basketball they’re off to a great start at 15-3, and Coach L has those guys playing at a high level.”