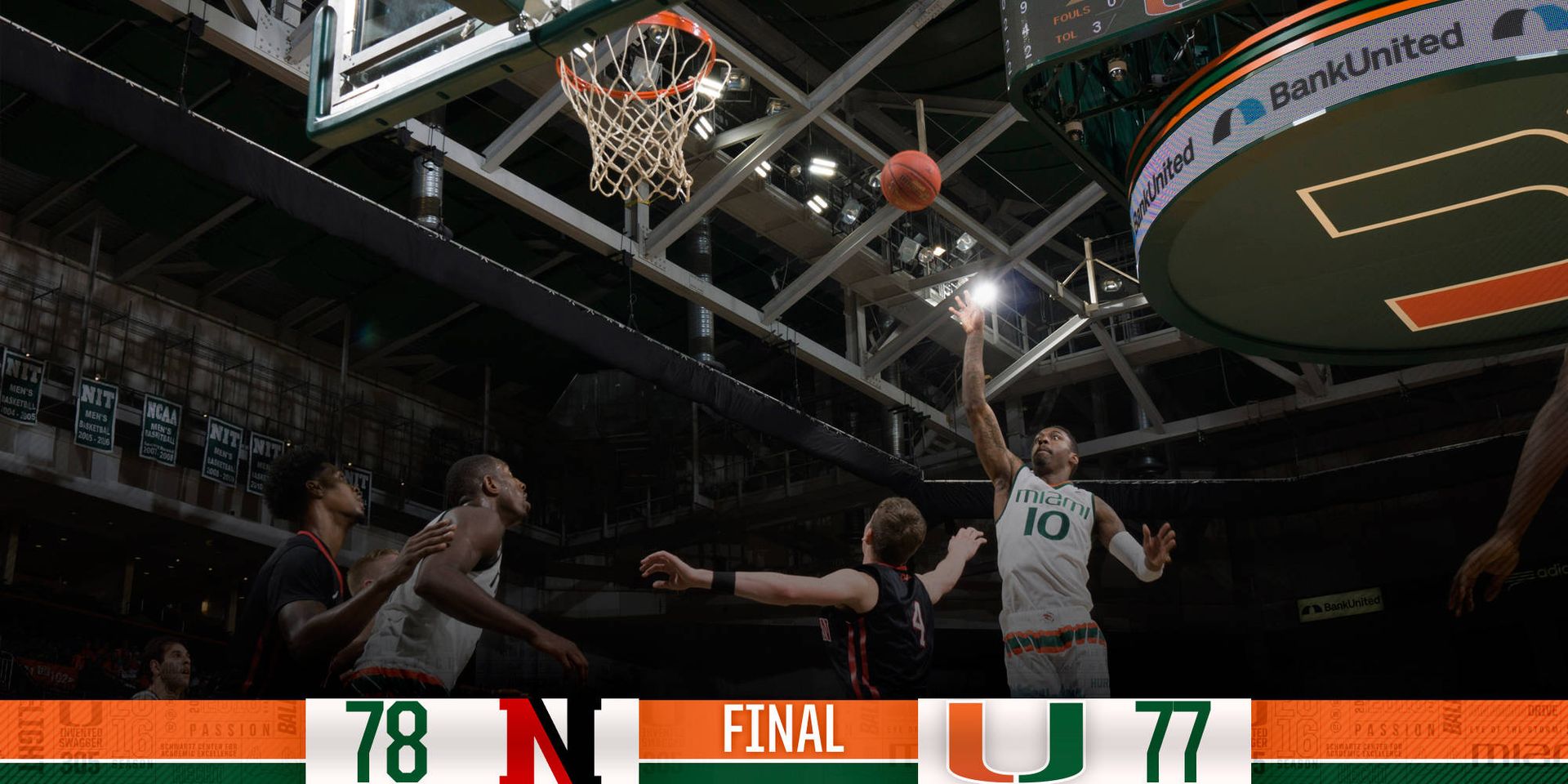 CORAL GABLES, Fla. (AP) — The No. 15/19 University of Miami men’s basketball team came up short to Northeastern, 78-77, Friday afternoon at the BankUnited Center.

Northeastern’s Quincy Ford made a jumper at the buzzer, giving Northeastern the one-point victory.

But Ford rescued the Wildcats, who were coming off a 67-61 loss at Miami (Ohio) on Sunday. The redshirt senior was 9 for 17 from the field, and David Walker added 21 points.

After McClellan’s 3-pointer bounced off the rim, Walker made two free throws with 34 seconds left.

Miami trailed until Angel Rodriguez’s corner 3-pointer with 7:48 remaining in regulation gave the Hurricanes a 58-56 lead. A 3-pointer from Jaquan Newton with 6:29 left increased Miami’s advantage to 63-59.

Rodriguez scored five unanswered points on a 3-pointer and layup off a steal to help the Hurricanes open a 70-63 lead with 4:23 remaining.

– Miami’s starting lineup for the sixth-straight game: Angel Rodriguez, Sheldon McClellan, Davon Reed, Ivan Cruz Uceda and Tonye Jekiri.
– Miami trailed at the half, 35-30, for the first time this season. UM trailed by as much as 13 in the game.
– The Canes took their first lead against Northeastern with 7:42 minutes left in the game. In its previous two games, Miami never trailed.
– Head coach Jim Larrañaga has a 566-384 overall record in his 32nd season as a head coach. He is 96-50 in his fifth season at the University of Miami, with a 41-29 mark in ACC play.
– In just his fifth year at UM, Jim Larrañaga is closing in one 100 wins at The U. He is currently 96-50. Bruce Hale was the Miami coach who won 100 games the quickest, earning 100 victories in just 159 games. Hart Morris took 163 games, Frank Haith 174 and Leonard Hamilton took 230 games.
– Miami is 2-1 in the all-time series against Northeastern, all of which are home contests.
– Miami is 79-36 overall when ranked in the Top 25, 61 -30 since the rebirth of basketball at Miami (1985), and 31-16 since joining the ACC. Under Coach Larrañaga, Miami is 20-9 when the Canes are ranked in the Top 25.

Player Notes
– Tonye Jekiri scored the first eight points of the game for Miami. In his 109 previous games played, Jekiri had scored eight-or-more points in the entire game 25 times last season, five times as a sophomore and never as a rookie.
– Jekiri was halfway to double-digit rebounds at the break, recording five boards in the first half. He finished with a game-high of 12 rebounds.
– Tonye Jekiri moved into a tie for 11th on Miami’s career blocks list, tying Kenny Kadji (2011-13) with 97 career blocks.
– Sheldon McClellan scored in double-digits for the 36th time of his Miami career, tallying 18 against Northeastern. He has 10+ points in five-of-six games this season.
– JaQuan Newton went on a 3-of-3 field goal run in the first half, and ended the game with 13 points.
– Miami senior Sheldon McClellan has scored 1,498 points in his career, tallying 843 in two years at the University of Texas and 655 in a year and six games at UM.
– Eight Hurricanes scored in the game, led by 19 from Reed, 18 by McClellan and 13 from Newton.
– Angel Rodriguez dished six assists against Northeastern, the fifth game this season he has posted four-or-more assists.
– Davon Reed tallied four assists, the ninth time in his career with four-or-more assists.