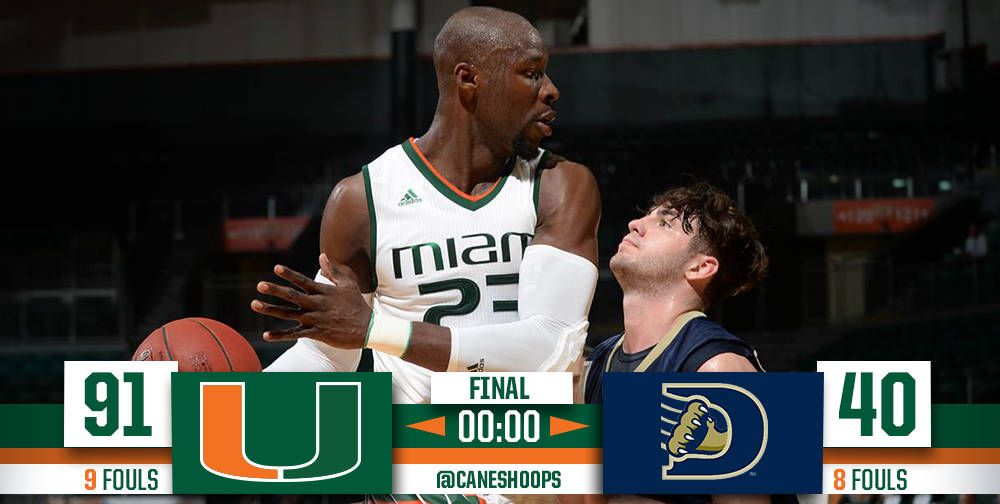 Sheldon McClellan led all scorers with 18 points on 8-of-13 shooting and Kamari Murphy, playing in his first game in a Miami jersey, logged a double-double with 14 points and 11 rebounds.

Scoring at Miami’s exhibition game opened just nine seconds into the game, as Angel Rodriguez assisted on a 3-pointer from Ivan Cruz Uceda. The Spaniard, who has transformed his body over the summer, dropping more than 20 pounds, drained his second three of the night just two minutes later, to give Miami the early 10-3 lead.

Four of Miami’s first five field goals made were from long distance, as McClellan and Cruz Uceda each knocked down a pair.

Miami continued to put on the pressure against Dowling, taking a 36-13 lead with four minutes left in the half after Ja’Quan Newton knocked down a three for the Canes.

Miami led 49-15 at the half, led by 12 points from McClellan and nine from Newton. Rodriguez added a pair of assists and trio of steals in the first 20 minutes of play.

Tonye Jekiri, last season’s leading rebounder in the ACC was stellar on the boards again, pulling down seven in the first half and three in the second, finishing with nine points and 10 rebounds against Dowling.

The Hurricanes scored the first 15 points of the second half, with the final 10 of the run coming from McClellan and Cruz Uceda, to take a 64-15 advantage with 16:03 to go. Miami’s lead would not slip under 45 the rest of the way.

Miami’s final four points of the night were scored by players making their debuts in orange and green. Mike Robinson connected on a jumper with 2:18 left to give the Canes their largest lead of the evening and Anthony Lawrence, Jr.’s layup with 56 seconds remaining tied that 51-point margin and proved to be the last bucket of the game.

In addition to McClellan and Murphy, both Newton (13 points) and Cruz Uceda (10 points) scored in double figures. The Hurricanes had a 52-18 edge on points in the paint in the contest and led 55-29 in rebounding.