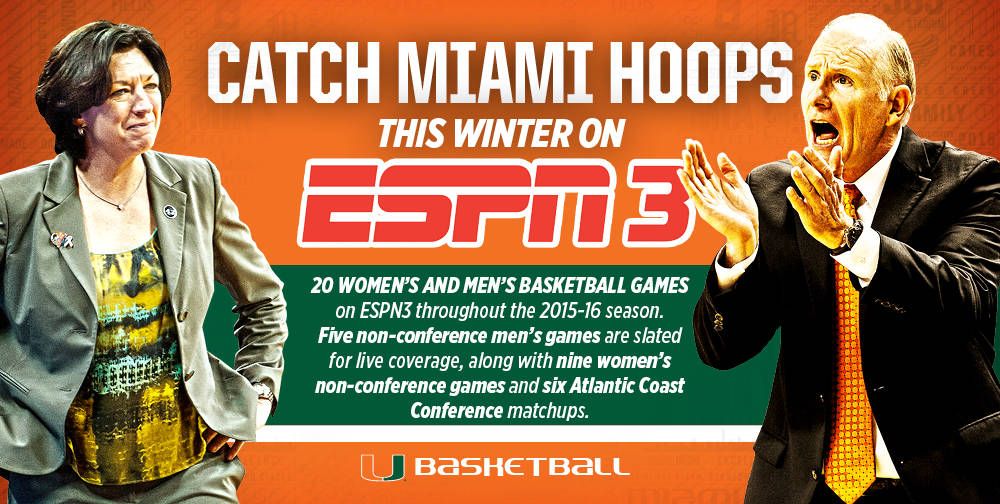 The University of Miami will deliver 20 women’s and men’s basketball games on ESPN3 throughout the 2015-16 season. Five non-conference men’s games are slated for live coverage, along with nine women’s non-conference games and six Atlantic Coast Conference matchups.

Live coverage begins Wednesday, Nov. 4 with an exhibition doubleheader, as the women face Nova Southeastern at 4 p.m., followed by the men playing Dowling at 7 p.m.

The Miami women reached the postseason for the sixth-straight season in 2014-15, advancing to the second round of the NCAA Tournament. The Hurricanes return eight letterwinners from that group, including junior Jessica Thomas, redshirt senior Michelle Woods and the ACC’s leading returning scorer, junior Adrienne Motley, a 2014-15 First Team All-ACC selection and 2015-16 Preseason All-ACC honoree.

Ranked No. 21 in the latest CBS Sports Preseason Top-25 poll, the Hurricane men return the core lineup from a squad that advanced to the championship game of the 2015 NIT, including seniors Angel Rodriguez, Tonye Jekiri and Sheldon McClellan, who was among the 20 players named to the watch list for the 2016 Jerry West Shooting Guard of the Year Award.

The University of Miami has invested resources into a full-scale video department, capable of simultaneously broadcasting two live events. Since August of 2015, Miami has broadcasted 16 events and has 27 events scheduled for future broadcasts on ESPN3, all produced from within the athletic department’s walls, with in-house staff members.