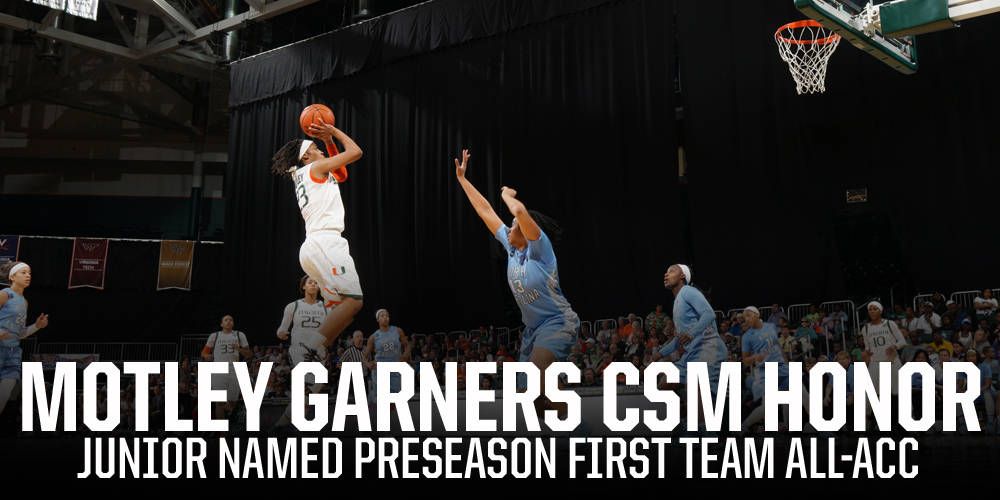 CORAL GABLES, Fla. – Junior Adrienne Motley of the University of Miami women’s basketball team has picked up her first preseason All-ACC accolade of the year.

Motley is coming off a spectacular sophomore season in which she was named First Team All-ACC by the Blue Ribbon Panel, ACC Coaches and College Sports Madness. She was the lone player to rank top 15 in the conference in scoring, field goal percentage, 3-point percentage, and free throw percentage.

A native of Newport News, Va., Motley averaged 16.9 points, 4.2 rebounds, 2.1 assists, and 1.4 steals per game in 2014-15. She was named the espnW National Player of the Week and the ACC Player of the Week Jan. 12, 2015 after a week in which she scored a career-high 32 points in Miami’s victory over fourth-ranked Notre Dame and then had 22 points in a win at Virginia Tech.

Motley is one of three co-captains for the 2015-16 Hurricanes, joining fellow junior guard Jessica Thomas and redshirt senior guard Michelle Woods. Miami begins its season Nov. 4 with an exhibition game against Nova Southeastern at 4 p.m. at the BankUnited Center.

To keep up with the latest news on the University of Miami women’s basketball team, follow @CanesWBB.