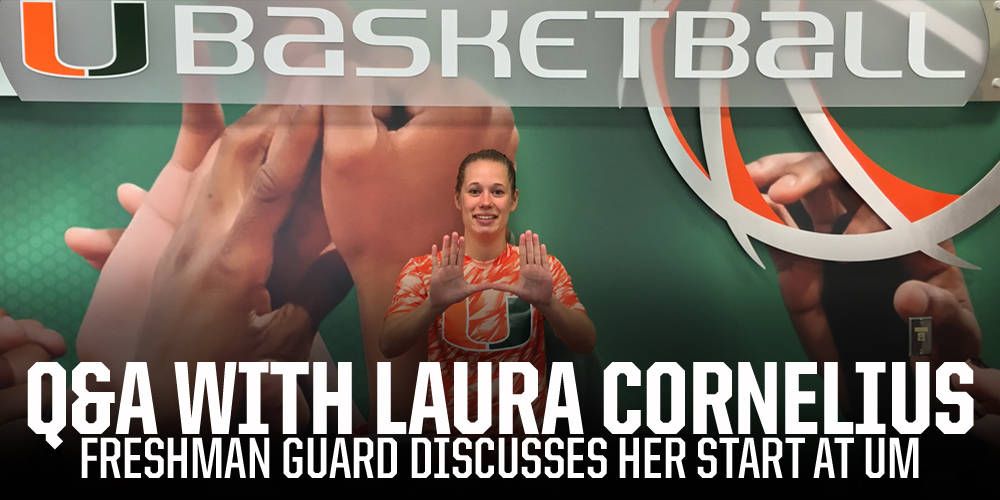 CORAL GABLES, Fla. – Freshman Laura Cornelius of the University of Miami women’s basketball team came to the Hurricanes all the way from Groningen, Netherlands.

Cornelius, a 5-foot-8 guard and a ProspectsNation.com five-star recruit, checked in with HurricaneSports.com for a question and answer session with nearly two weeks of classes in the books . . .

Q: What’s it like being a Hurricane so far?

A: The first week was great. We had a lot of fun. It was also very busy. We had to do a lot of meetings, see a lot of new people, and I’m not good at names, so that was a hard part for me, but I’m getting used to the weather, to the people, to everything. So, I’m having a great time over here.

Q: You’re not only adjusting to college, you’re adjusting to living in the United States. What has been the most difficult part of that so far?

A: Well, the biggest difference between Europe and the United States, I think it’s probably the food. It’s so big, everything is a lot bigger than I’m used to. Yeah, I think that’s a big difference.

Q: Have you tried any new food yet?

A: I had an American waffle for breakfast [Wednesday], so that was pretty good, but that’s not that healthy, so [Laughs] it was just for one day. [Also, another difference here is] about sports, it’s the whole—we don’t know this back home, but a college with a lot of different sports. So, the whole atmosphere, all the people wearing the “U,” that’s so cool. I’ve never seen that before, so that’s a great experience and that’s probably the big difference.

Q: Is there anything that’s really similar to home that you weren’t expecting to be similar?

A: No, no, I’m used to different things. Going to school, combining school and sports together, that’s what I did back home as well, but it’s a whole new level here.

Q: Have you declared a major yet?

A: No, I want to major in public health, but I’m just following the basic stuff right now. So, we’ll see about that.

A: I like sports psychology. I think that’s very interesting and the teacher is great as well . . . The relationships between psychology and sports, I think that’s kind of interesting. Also, I have subjects like theater—I have an acting class—that’s not me, but it’s actually really fun. That’s not what I want to do later, but it’s fun to follow right now. Those are my most fun classes I think.

Q: What has been your most favorite part about UM so far?

A: The people, I think. The people, from day one, they gave me the feeling that I’m home here, that I’m part of a family and, well, that’s a big thing. I’m coming from far and . . . the people are really supportive, always ask how you’re doing. I’m not used to that, that everybody says, “Hey, how are you?” We don’t do that, it’s like, “Hey,” and we move on. [Here] it’s like, “Hey, how are you? How have you been doing today?” The interest in each other, that’s really special.

Q: The basketball team went to your home country just a few weeks ago. Although you weren’t a part of the trip, you ended up kind of experiencing some of it with the team. What was that like for you?

A: Well, first of all, it was really special to have the women’s basketball team in our city of Amsterdam. I think it was great. The girls and all people [on the trip], they got the opportunity to see where we live, what our houses look like, what our food looks like. So, they kind of know where we come from. I think that’s a great thing. Being on a boat tour or watching their games, it was just like the bridge from Europe to American life made smaller. I had a great time [with them] in Amsterdam and I’m sure they did as well. It was fun to see them over there.

Q: What are you most excited about?