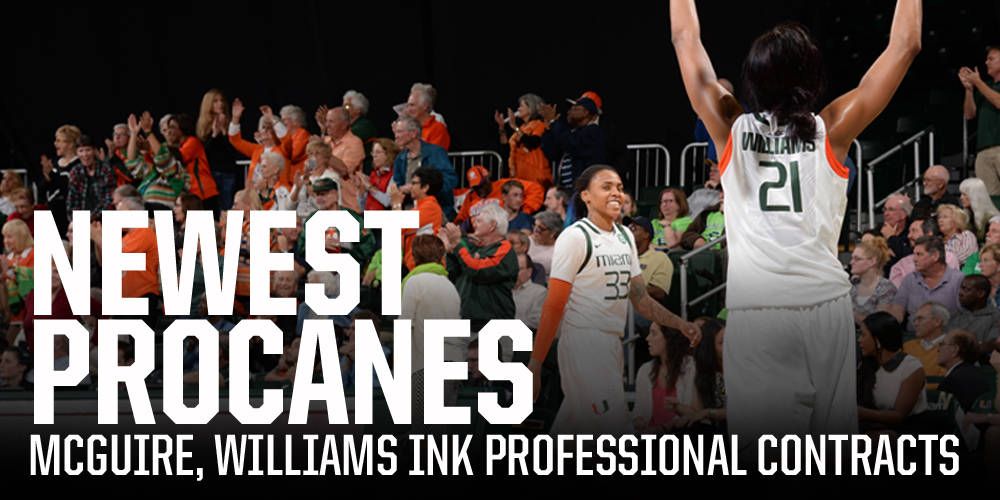 CORAL GABLES, Fla. – A pair of seniors from the 2014-15 University of Miami women’s basketball team have signed professional contracts. Both Suriya McGuire and Jassany Williams will be continuing their playing careers overseas.

McGuire, a 5-foot-11 guard, inked with Hamar Basketball Club in Iceland, while Williams, a 6-foot-2 forward, agreed to a deal with Alte Kanti Aarau in Switzerland.

“We are just thrilled for Suriya and Jassany,” Miami head coach Katie Meier said. “They are super individuals who represented the University so well throughout their careers. I could not be happier to see them both fulfill their lifelong dreams.”

A Minneapolis native, McGuire was a member of the Hurricanes from 2011-15 and tied for the fourth-most games played in program history, with 127 appearances. Additionally, McGuire’s 76 blocks place her No. 11 all-time at Miami.

McGuire averaged 9.2 points per game as a junior in 2013-14 and posted double figures in a game 35 times during her career. She recorded 50-plus assists and 115-plus rebounds each of her final three seasons in Coral Gables. McGuire helped Miami reach the postseason all four of her seasons in orange and green, including three trips to the NCAA Tournament.

“It’s amazing to see my dream finally become my reality,” McGuire said. “This is just the beginning of what is yet to come.”

Hailing from nearby Davie, Fla., Williams played for Miami from 2013-15 after spending the first two years of her career at Auburn. A 2014-15 All-ACC Academic Team selection, Williams set the program single game record with nine blocked shots in Miami’s win over fourth-ranked Notre Dame last season.

Despite playing just two seasons for the Hurricanes, Williams finished her career third in blocks at Miami with 133. Her 76 blocks in 2014-15 rank second on the single season list, while her 57 in 2013-14 tie for fifth in Hurricane history. Williams led Miami in blocks and rebounds her final season, while leading the ACC in blocks in conference play and finishing sixth overall.

“I feel very honored and blessed to be able to pursue my dream of becoming a professional basketball player,” Williams said. “Switzerland is a very beautiful place with wonderful people and I am so happy to be a part of this organization.”

McGuire and Williams are the 13th and 14th Hurricanes to sign pro deals during Meier’s years heading the program, with greater than a half dozen of those coming in the last four years alone.