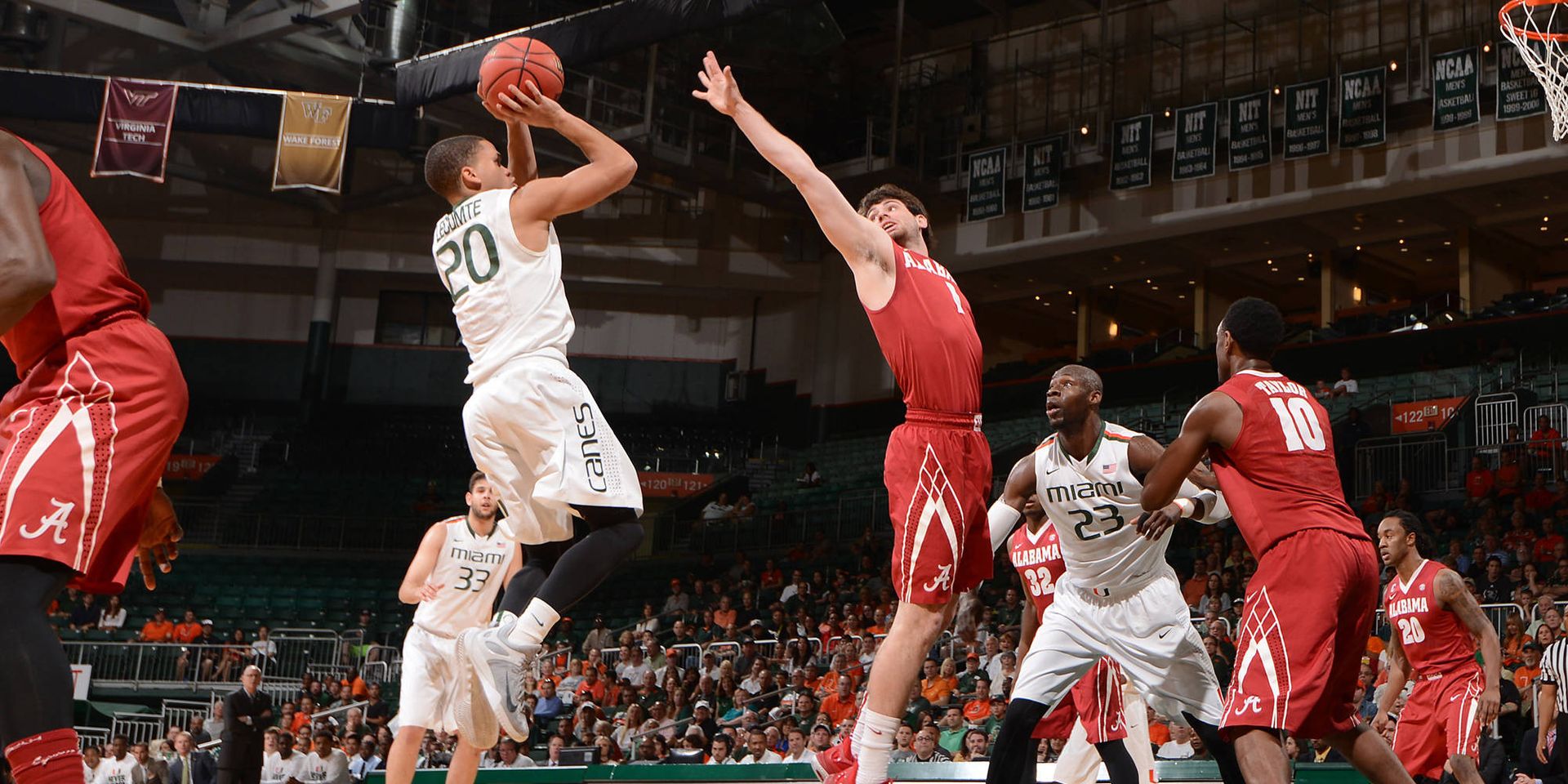 Deandre Burnett scored 13 points and Tonye Jekiri finished with nine points – including the first 3-pointer of his 102-game college career – and 12 rebounds for the Hurricanes.

Miami (23-12) advances to Tuesday’s NIT quarterfinals against either Richmond or Arizona State. Those schools meet in a second-round game at Richmond on Sunday night.

The Hurricanes, who felt they belonged in the NCAA Tournament’s field of 68, improved the Atlantic Coast Conference’s record in the NCAA and NIT to 9-1.

Rodney Cooper scored 20 points and Levi Randolph added 17 points for Alabama (19-15). Retin Obasohan added 11 and Michael Kessens had 10 for the Crimson Tide – who missed 21 of 25 shots during a 15-minute stretch of the second half.

Miami played without point guard Angel Rodriguez, who sat out because of a nagging wrist injury that he’s aggravated several times in recent weeks. The Hurricanes advanced despite a season-low two points from Sheldon McClellan, the team’s leading scorer.

The Hurricanes used a 12-1 run to take a 27-18 lead, only to see Alabama quickly answer with a 16-3 spurt of its own. Obasohan’s step-back foul-line jumper as time expired in the first half capped that burst, putting the Crimson Tide up 34-30 going into the locker room.

Miami trailed by seven points with 17 minutes left, when Jekiri’s putback dunk breathed some life into a quiet arena – and, it seemed, into the Hurricanes.

Burnett’s consecutive 3-pointers midway through the second half put Miami ahead for good, and Jekiri’s 3 moments later added to what became a game-deciding 17-2 run for the Hurricanes.

* The Canes knocked down nine 3-pointers, the 15th game in which the Canes drained nine or more from long range. Six Canes added to the total: Burnett, Reed, Lecomte, Jekiri, Cruz Uceda, Sherman.

* Starters for the game against Alabama were Manu Lecomte, Davon Reed, Sheldon McClellan and Ivan Cruz Uceda. Miami is now 2-0 with this lineup.

* Junior Tonye Jekiri attempted and made his first career 3-pointer in the second half against Alabama.

* With 12 rebounds against Alabama, junior Tonye Jekiri has 354 rebounds this season, trailing No. 3 Harry Manushaw (372) in the record book for most rebounds in a season.

* Davon Reed knocked down two 3-pointers in the game, the 11th time this season he has drained multiple shots from distance.

* With seven boards, Ivan Cruz Uceda set a new season/career high, surpassing his previous best of five, which he had collected five times this season.

*Cruz Uceda drained one 3-pointer against Alabama, the 10th game this season he has hit a three, and the sixth time in seven games.

* Burnett hit three shots from three, the eighth time this season he has hit multiple shots from long range and the fourth time he’s hit three-or-more.