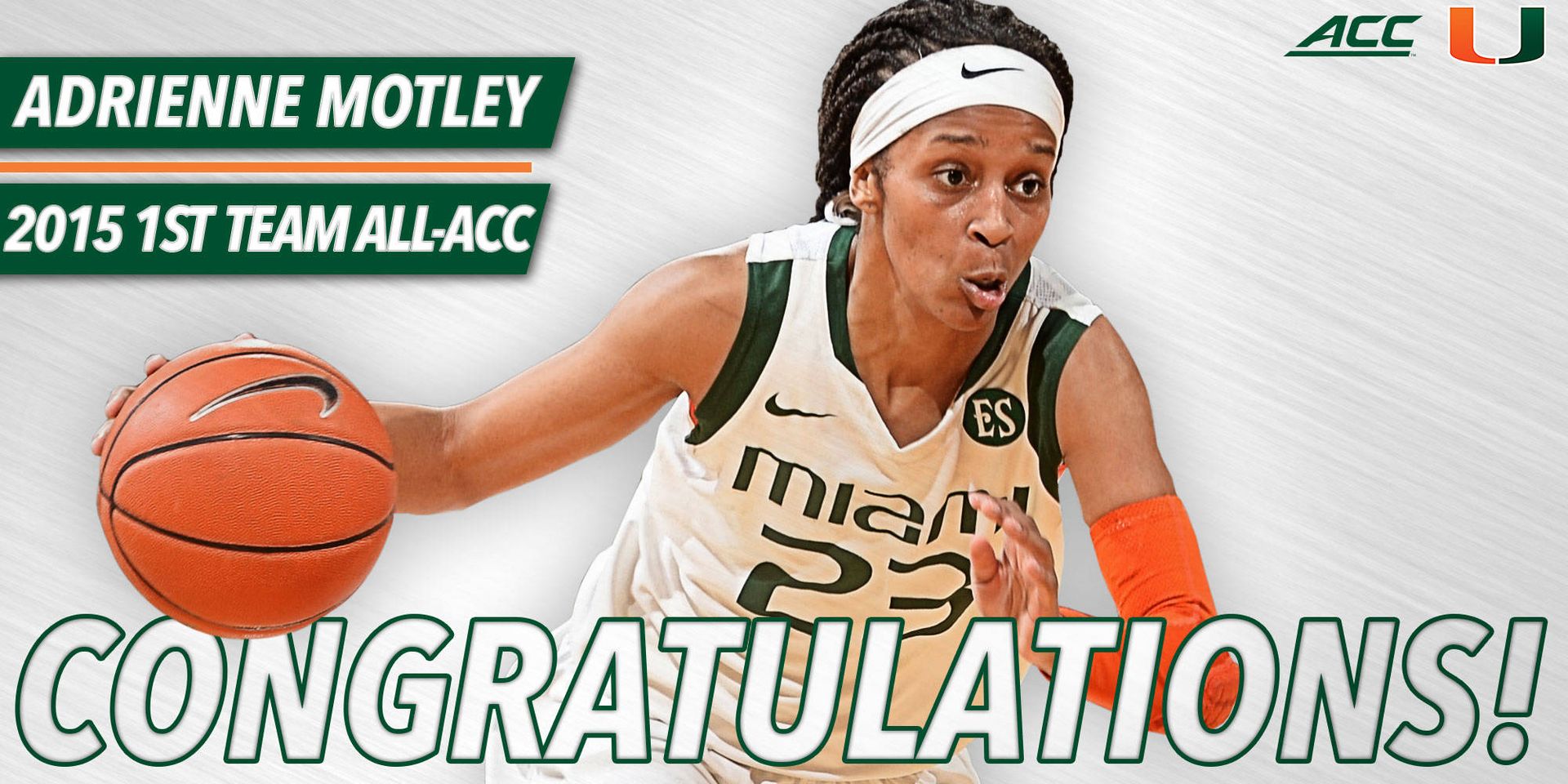 Motley is sixth in the conference in scoring and is the only player in the ACC who ranks top 15 in scoring, field goal percentage and free throw percentage.

“I’m thrilled for Adrienne. It’s a well-deserved honor and great to get that kind of recognition in the nation’s best conference,” Miami head coach Katie Meier said. “She’s a team player and her focus is 100 percent on how to make Miami win. She’s been doing a great job of not only leading this team, but also of sharing the basketball and doing whatever it takes to win.”

Motley is the sixth player in Miami’s 11 years in the ACC to be named a First Team All-ACC pick and is the 10th First Team All-ACC selection overall for the Hurricanes. She is just the second player in program history to receive the honor as a sophomore, joining Shenise Johnson (2009-10).

“It’s definitely a blessing just to know all the hard work and all the time spent in the gym has been paying off and I couldn’t do it without my teammates or the coaches,” Motley said of the honor.

In Miami’s 29 games this season, Motley has scored in double figures 26 times and has recorded 16-plus points on 20 occasions. The 5-foot-9 sharpshooter has led or co-led the Hurricanes in scoring 20 times in 2014-15.

Motley was named the espnW National Player of the Week and ACC Player of the Week Jan. 12 after leading Miami to a 15-point win against fourth-ranked Notre Dame and a 17-point win at Virginia Tech. Motley scored a career-high 32 points on 13-of-19 (68.4 percent) shooting against the Fighting Irish, while pulling down seven rebounds and dishing out a team-high four assists.

She has been named the MVP of all three tournaments/events that Miami has played in this season, taking home the honors at the Miami Thanksgiving Tournament, the Tulane/DoubleTree Classic and the Miami Holiday Tournament.

“I think she’s special because she just makes the right basketball play with the ball,” Meier said. “Her defense has really, really improved and she got herself in great shape and those two things are showing. Now she’s an all-around player and she’s just really, really worked on her game in the offseason and the results are here.”

Motley and the Hurricanes begin play at the ACC Tournament in Greensboro, N.C. Thursday, March 5 at 2:00 against Virginia. The eighth-seeded Hurricanes have a bye in the first round before meeting the ninth-seeded Cavaliers on day two at the Greensboro Coliseum.