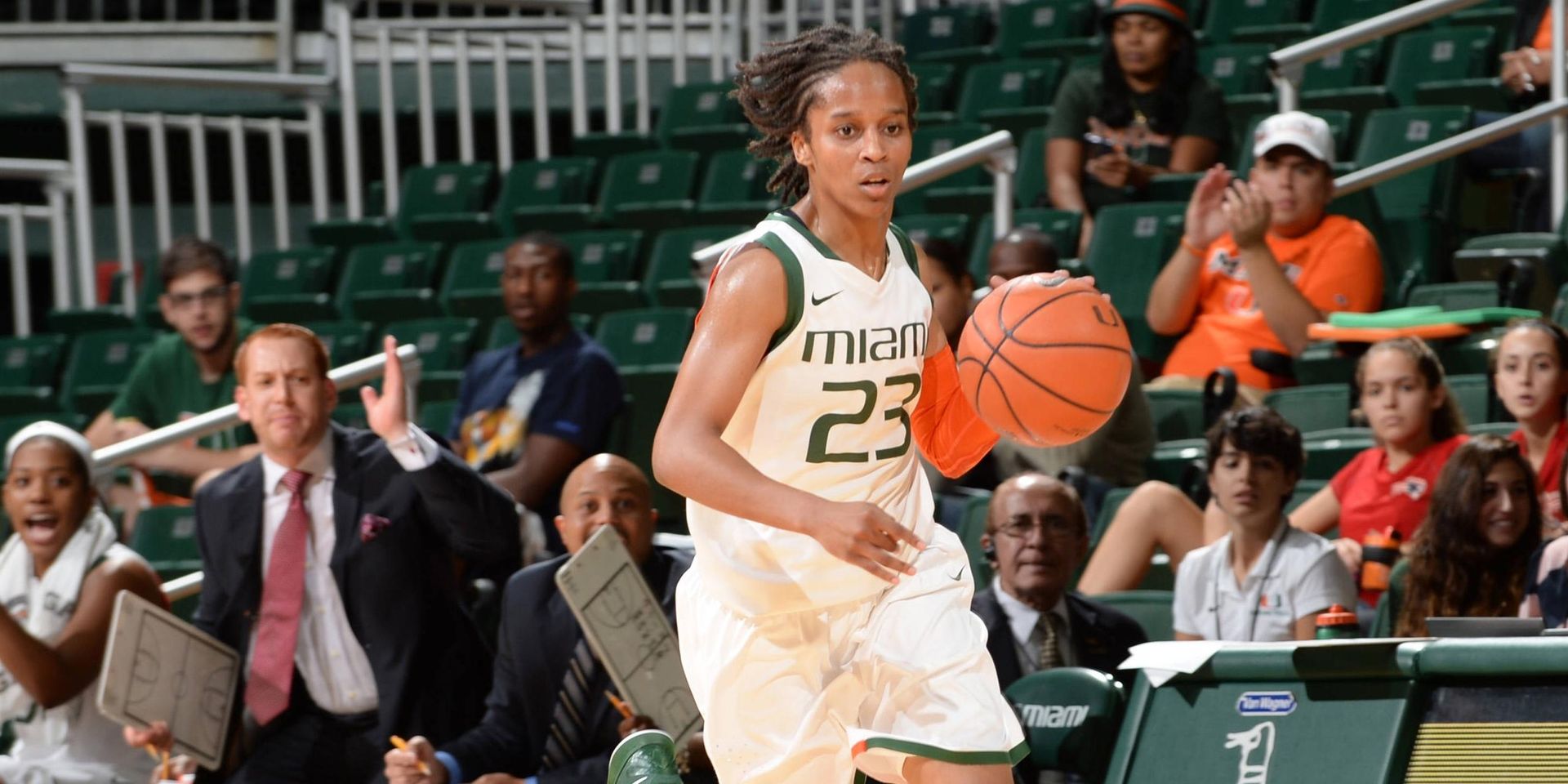 CORAL GABLES, Fla.— Katie Meier must have been waiting for a game like this.

It took until early December, but Adrienne Motley and Suriya McGuire – arguably the head coach’s most talented offensive duo – finally exploded on the same night. The result? A 66-54 victory over Wisconsin that guided the Hurricanes to a sweep in the ACC/Big Ten Challenge and improved the team’s record to 5-2.

“It was a night where we had only two players whose offense was coming through – that was Ray and Motley,” Meier said afterwards. “For the rest of the team, [they were] not bad looks but they weren’t going in.”

Though Motley had been averaging a robust 16.0 points per game entering the contest, McGuire was averaging just 8.3 and hadn’t cracked the starting lineup in the past four games.

That streak ended Thursday night, and McGuire rewarded her head coach with a 19-point performance – by far her best overall showing of the young season.

“We’ve been platooning, so the starting lineup doesn’t really matter – it’s just been two even teams,” Meier explained. “But tonight I knew we needed Ray. I knew she would have a big game. I didn’t want to cut any of her minutes down.”

The duo combined for over 60-percent of Miami’s points in the win, with Motley scoring a season high-tying 21.

McGuire made an immediate impact. She opened the game’s scoring with a three-pointer, recorded steals on back-to-back possessions and ended Miami’s 11-0 game-opening run with her second three-pointer of the night at the 17:29 mark.

“That was an incredible impact to start the game,” Meier said.

McGuire had exceeded her season-high point total (12) with 13 in the first half alone, and recorded 19 points in the game, just four points shy of a career high.

“It gives me a lot of confidence, but I’ve never been a player to worry about my points,” McGuire said. “I just want to make an impact in the game and make sure we get the win, regardless if I have two points, 19 points…whatever it takes to get the win.”

Miami didn’t extend upon its early lead, beating Wisconsin by just 12 after opening the game on an 11-0 run. But with offense hard to come by, it was up to the rest of the Hurricanes to make an impact in other ways.

McGuire doubled up on both ends of the floor when Meier’s staff had decided that 12 first-half points was enough for Badgers guard Nicole Bauman. McGuire was given sole responsibility to cover Bauman for the rest of the half, and the junior didn’t score again before halftime.

“On those nights, you better offensive rebound and you better get some steals, and that’s what we did,” Meier said. “I didn’t feel like we converted off our steals like we normally do, but in huge moments, when Wisconsin had a little bit of life, it was either an offensive rebound or a press or steal situation that kind of broke their backs.”