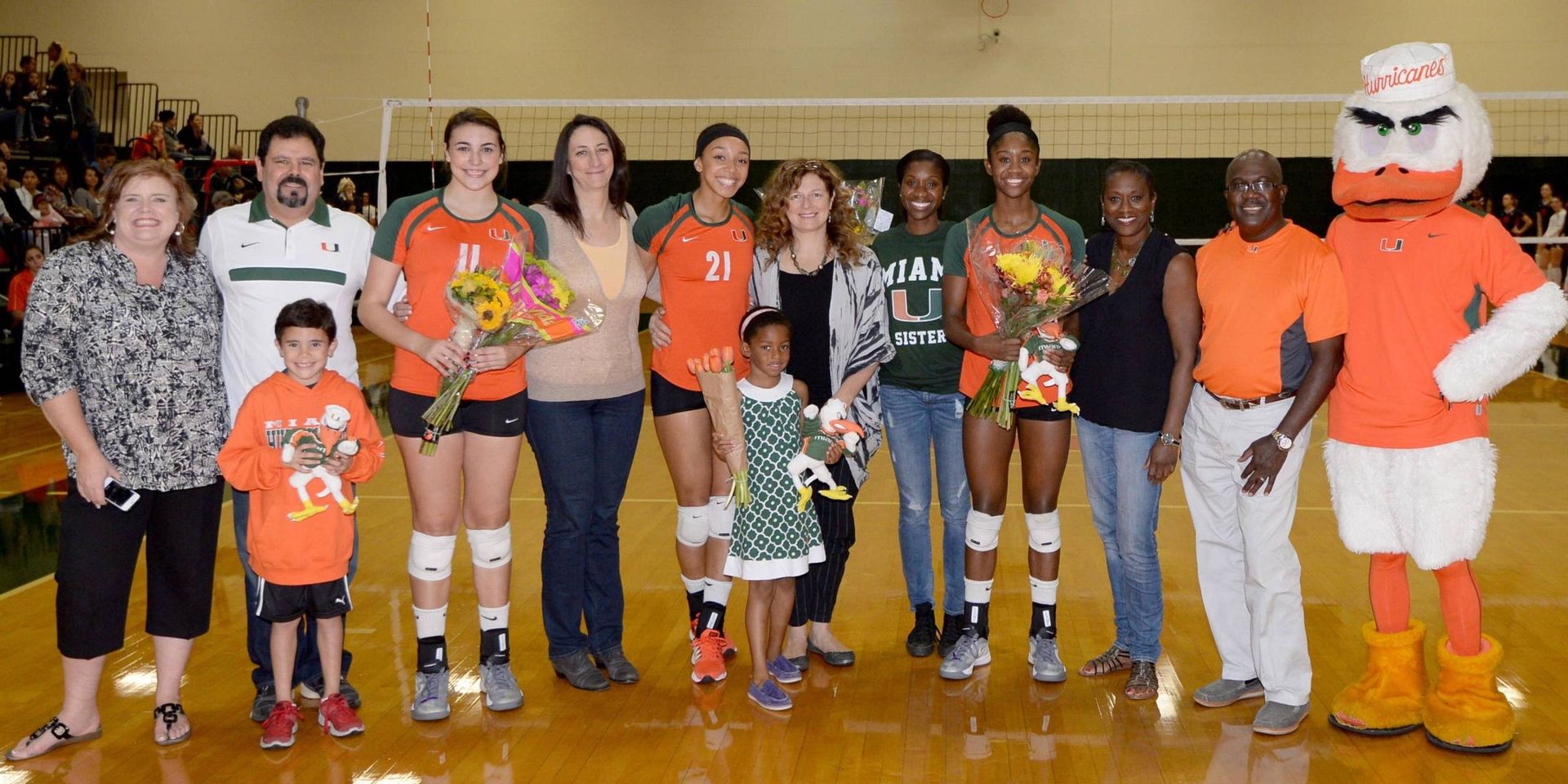 Blair Fuentez, Savanah Leaf and Emani Sims were honored in a pre-match ceremony honoring them for their contributions to Hurricane volleyball and the trio of seniors played a key role in Miami’s three-set win over the Orange.

The Canes (19-7, 12-3 ACC) took the opening set, 25-10, jumping out to an 8-4 lead early and closing the set on a 10-3 run. Kelsie Groot led Miami with five kills in the set, while Leaf added four kills and Fuentez had a service ace to help the Hurricanes win the opening set.

“I was actually really nervous because of the hype surrounding tonight,” Fuentez said. “The girls decorated the locker room for us and that got everyone excited for tonight. It was definitely exciting. I got to play a lot of different positions so it was exciting to be able to contribute in a lot of different things for the team.”

Miami took a 2-0 lead into the break after its 25-12 victory in the second set. Sims was the top attacker for the Canes, notching five kills and adding a pair of blocks. Leaf was also active on the attack, adding four kills and a block.

“I don’t think that Syracuse played as well as they wanted to play,” Gandara said. “They are a better team than that so I thought it was critical that we maintain our level of play. We kept our focus on the game plan, and we served well and we did the things we have to do to win. In Game 3, Syracuse came out and put some pressure on us and we responded.”

After a dominant showing in the first two sets, the Hurricanes found themselves in a tight battle in the third set. Miami battled back and forth with Syracuse (8-19, 1-14 ACC), but the Hurricanes came away with a 26-24 victory that was capped by a Leaf ace that secured the set and the match.

“They came out and fought hard,” Leaf said. “It was nice to get the job done at the end.”

The senior trio played a big role in securing Miami’s 12th ACC victory of the 2014 season. Leaf led all players with 14 kills, eight digs, a block and an ace. Sims finished the night with six kills, five blocks and four digs, while Fuentez tallied three kills, a block and an ace.

“Both Emani and Blair were playing amazing,” Leaf said. “Blair came in and hit some great shots and Emani was huge like she always is. I think it’s really great to play with these two amazing players and it was great to be able to play with my family here.”

Groot was active all over the court for Miami, tallying 10 kills, eight digs, a team-high six blocks and a team-best two aces. Junior Taylor Scott added seven kills while hitting .389 and led the Canes with 12 digs.

Junior Caitilin Donahoe and freshman Michele Marenus each recorded an ace, combining with Groot, Leaf and Fuentez to bring Miami’s total to six on the night.

“It was fun like it always is and it’s always great playing in front of our home crowd,” Sims said. “It’s kind of sad that we only have one more game here left, but I think all of us enjoyed our senior night. We appreciate everyone’s support over the last four years.”

The Hurricanes will host Boston College in the final home match of the 2014 season Sunday at 1 p.m. Following this weekend’s homestand, Miami will travel to Georgia Tech and Florida State to close out the 2014 regular season. The Canes will face the Yellow Jackets at 6 p.m. on Nov. 26 and are set to face the Seminoles at 1 p.m. on Nov. 28.