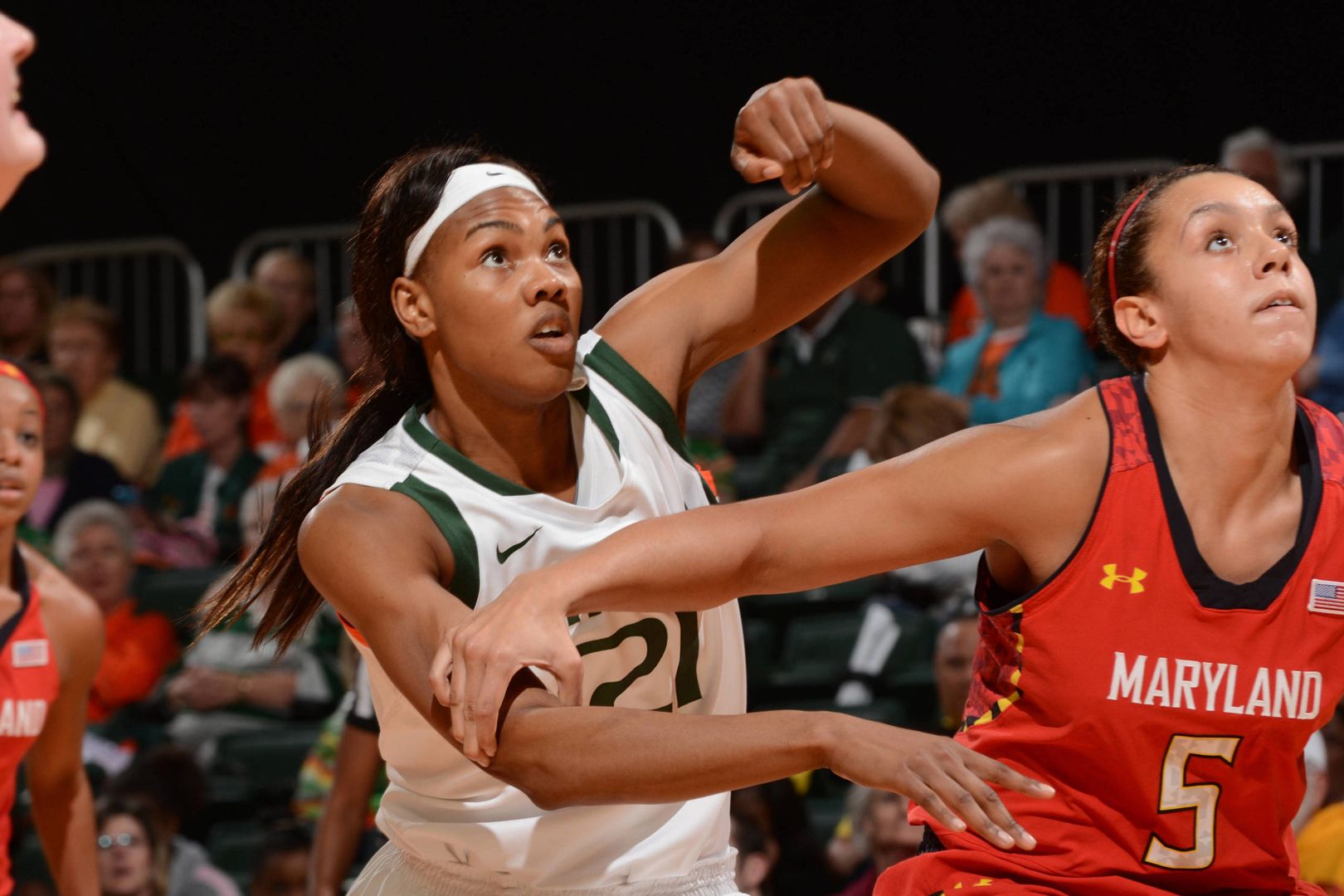 When deciding on in-game substitutions, the Miami head coach would inevitably look to her bench and sitting in street clothes was a talented (and sizable) contingent: junior Michelle Woods, true freshman Nigia Greene and early enrollee Aisha Edwards.

“There were a lot of games where I looked over thinking, ‘That’s 30 points sitting down there that we could be using,” Meier said Sunday on the first official day of team practice.

Woods broke her sternum in October 2013, while Greene suffered an ACL tear a month later. Both figured to play significant roles in the offense last year, but were forced to redshirt and miss the entire season. Edwards competed in practice while adjusting to life as a college basketball player.

Now ready to compete, the trio represents a change of pace for Meier and her staff. Seven of the 13 players on the 2014-15 Hurricanes team did not don the orange & green a season ago – more than half of the current roster.

But after the first afternoon of practice at the Fieldhouse Sunday, Meier was far from concerned with the “newness” of her group.

“The newcomers did a phenomenal job with their energy level. It’s a great situation to have,” Meier said. “If your younger kids are bringing tons of energy on the defensive end, and your upperclassmen are showing great composure, you’ll have great practices like we did today.”

Entering her 10th season as leader of the program and with a stretch of five consecutive postseason appearances, Meier says that Sunday’s practice even marked a “first” for her during her time at the helm in Coral Gables.

“The defense at this point is always ahead of the offense in the first couple of practices,” Meier said. “But we got somewhat sophisticated in one of our offensive sets, which I’ve never been able to do in the first practice – ever.”

The length of the freshmen – Quevedo, Harris, Prather and Davenport all stand 6-foot or above – had a big role in Meier’s excitement.

Coupled with a few more experienced players – including senior Suriya McGuire and sophomore Adrienne Motley, an All-ACC Rookie selection a year ago – Miami has a recipe to be successful  this winter.

Getting McGuire to slow down has helped her transition into a more complete player, Meier says.

“I’m really excited about Suriya’s maturity. It has been extremely impressive – her composure, her patience. She has cleaned up her game tremendously,” the head coach said. “Slowing her mind a little bit allows her to play with more speed. She looks great.”

Now, the Hurricanes will have a more balanced lineup with a level of versatility that can take Meier’s team in a number of directions.

“We have a scramble of length and athleticism that can help us in our presses or when we need to run and get some quick points. I think we also have a real heady, no-turnover, sophisticated timing-based screen-and-cut offense. And finally I think we’ve got some real strength, where we could run some power or double low post, which we don’t do a lot.

“Time and score of the game will dictate our lineups more than anything.”

Join Meier and the Miami Hurricanes women’s basketball team at the fifth annual Hurricanes Fantasy Camp on Tuesday, Oct. 28 from 6:00 – 8:30 p.m. at the Fieldhouse adjacent to the BankUnited Center. Registration for the event is now open. There is limited space available and it will be filled on a first-come, first-served basis. Click here to sign up for the event now.