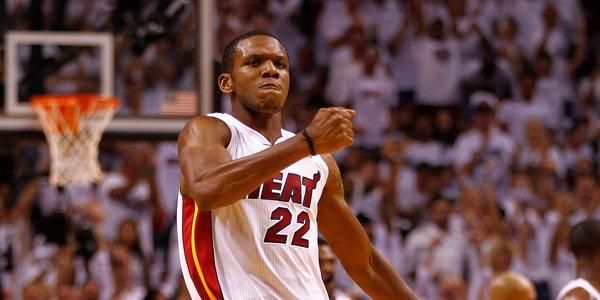 James Jones came up big for the Miami Heat in their playoff opener against the Charlotte Bobcats, scoring 12 points to help Miami pull out a big win on their home court. Jones looks to continue to use his shooting ability to help the Heat space out the floor.

James Jones – Miami Heat – Jones started off this year’s playoffs with a huge performance, scoring 12 points off the bench, including two three pointers, to help lead Miami past Charlotte in a hard fought game. Miami was a superb 18 points better than Charlotte with Jones on the floor. Jones has long established himself as one of the NBA’s best three point shooters. His position on a Heat roster loaded with talent allows him to continue in this niche, and he has delivered. Shooting an astoundingly accurate 51.9 percent from beyond the arc during the regular season, Jones forces Coach Erik Spoelstra to consider him as an option as Miami makes a run at their third consecutive NBA title.  Check out highlights from the HEAT game.

Shane Larkin – Dallas Mavericks – Larkin has spent this season learning from the established leaders of a veteran Mavericks team that was on the playoff bubble throughout the season. Now that Dallas has made the playoffs, Larkin will try use his explosiveness to give the Mavericks a youthful edge over an older San Antonio Spurs team. His 10.2 minutes per game will become that much more crucial against the Western Conference’s reigning champs.

John Salmons – Toronto Raptors – Salmons has contributed on and off the court as a veteran leader for a youthful Raptors team that surprised many by winning an Atlantic Division that featured preseason favorites Brooklyn and New York. As one of the few Raptors with significant playoff experience, Salmons will play an important role for a team looking to make a statement and challenge Eastern Conference favorites Indiana and Miami.

Will Frisby – Fort Wayne Mad Ants – Frisby has contributed for a Mad Ants team that is at the top of the competitive Eastern Division. He has appeared in 48 games, while averaging 7.4 points and 4.2 rebounds per game.

Robert Hite – Canton Charge – Hite has spent this season in Canton, averaging 23 minutes per game, while contributing 7.2 points and 3.2 rebounds per game this season. He has also made an efficient 73.7 percent of his free throws this season, proving to be a reliable option for the Charge in late game situations.

Lance Hurdle – Springfield Armor – Hurdle has appeared in 29 games this year for the D-League’s Armor. He has averaged 4.7 points per game for a team that has flirted with a .500 record throughout the year.

DeQuan Jones – Reno Bighorns – Jones finished the season on a tear, scoring over 20 points in two of the Bighorns’ last three performances. Appearing in 49 games and averaging 30 minutes, He has scored 13.7 points and averaged a respectable 4.8 rebounds per game.

Trey McKinney Jones – Fort Wayne Mad Ants – Jones is among the Mad Ants’ most reliable contributors, scoring in double figures in nearly every contest since the new year has begun. He has used his remarkable athleticism to average over 15 points per game in the 47 contests he has appeared in for a division-leading Fort Wayne.

Kenny Kadji – Rio Grande Valley Vipers – Kadji has gone through a transition this year, moving from Germany to the D-League. He continues to be an option beyond the arc that defenses are forced to consider and has averaged 6.5 points per game in the 19 games he has appeared in.

Brian Asbury – Hapoel Holon (Israel) – Asbury has been a key part of Hapoel Holon’s success this year. As their starting power forward, he has averaged 13.2 points per game and has shot an efficient 51.2 percent from the field. He also has played an important role as a legitimate outside threat that stretches the defense out to the perimeter.

Julian Gamble – St Vallier Basket Drome (France) – Gamble racked up impressive numbers this season for St. Vallier in the French League. As their starting Center, he has averaged 16 points and 9 rebounds per game this year, while shooting 59 percent from the field. He also makes an impact on defense, averaging 1.4 blocks and 1.2 steals per game.

Malcolm Grant – LF Basket Norrbotten (Sweden) – Grant was forced to make a tough transition this year, moving from the Canadian League to Sweden, but he found his stride in the games he played for LF Basket, shooting 50 percent from behind the arc and averaging over 20 minutes per game.

Anthony King – Artland Dragons (Germany) – As the starting power forward for the Dragons, King has had a remarkably efficient season. Averaging 25.6 minutes per game, King has averaged 12.5 points per game while shooting 81 percent from the free throw line, numbers not often found in a big man.

Durand Scott – Rio Natura Monbus Obradoiro CAB (Spain) – Scott helped his team in the competitive Spanish League as a sixth man, appearing in 22 games this season. He shot a respectable 46.8 percent from the field and showed the tenacity on defense that he was known for during his time at Miami.

Adrian Thomas – Shimane Susanoo Magic (Japan) – Thomas plays a pivotal role for the Magic, starting at power forward and appearing in 47 games this season. He has averaged 10.6 points and 5.2 rebounds per game this season and has shot 47.3 percent from the field.