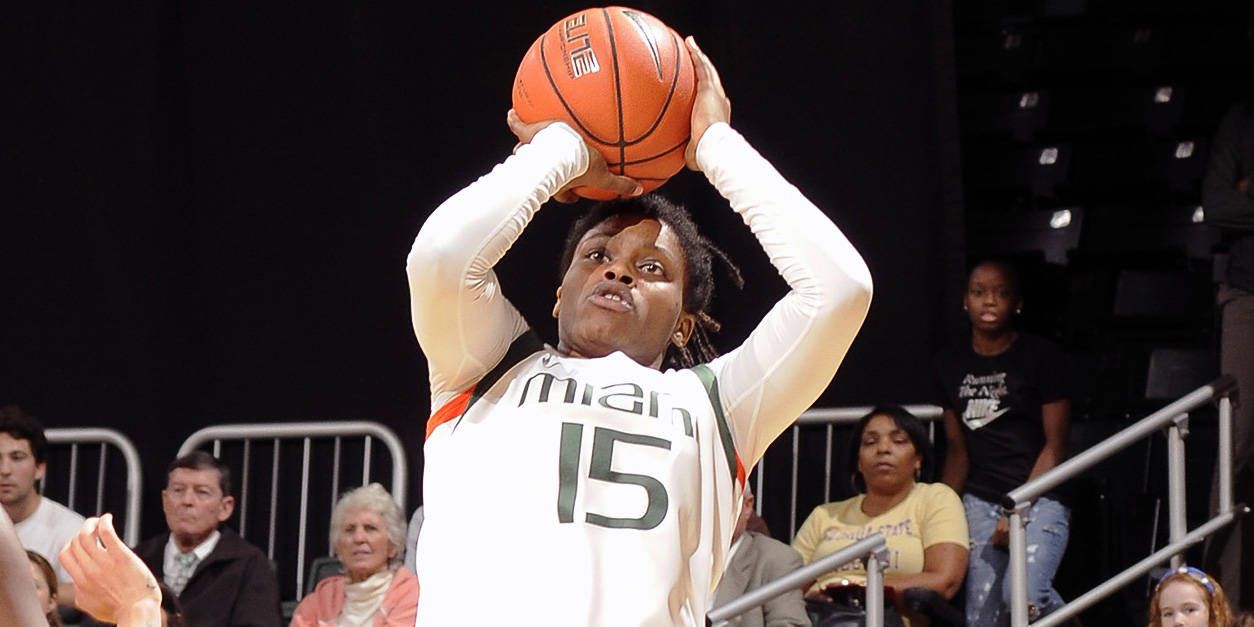 The Game
The Hurricanes (13-12, 5-7 ACC) host the first of two consecutive home contests on Thursday, Feb. 20 against ACC newcomer Syracuse. Tipoff is set for 7 p.m.

Last Time Out
Miami picked up a solid road win at rival Florida State on Sunday, Feb. 16. Led by career days from Keyona Hayes and Necole Sterling, the Hurricanes held off the Seminoles to pick up their fifth ACC win of the season. Hayes notched a new career high with 22 points and Sterling matched her career-high total of 14.

Crashing the Boards
Miami controlled the glass against Florida State, outrebounding the Seminoles by 15—the Hurricanes’ highest rebounding differential of the season. Suriya McGuire set a new career high with 13 rebounds. As a team, Miami ripped down 17 offensive boards.

Strength of Schedule
Miami’s strength of schedule ranks 31st in the country. The Hurricanes have played or will play the No. 2, No. 7, No. 8, No. 11, No. 14, No. 20 and one RV teams this season. In all but two of those games, Miami won or was defeated in single digits. Over the past eight games, six of Miami’s opponents have been ranked or in the receiving votes category at the time of the game.

Motley Crew
Adrienne Motley has scored in double figures in 10-straight games and in 14 of the last 15. In the past four games Motley is shooting the ball 62-percent from the field. Motley ranks third among freshman in the ACC with 14.0 points per game in conference, most recently notching 10 against FSU on Sunday. Also impressive is Motley’s performances against top-10 teams, where she is averaging 15.7 ppg (Duke, North Carolina, Notre Dame and Maryland).

Scouting Cuse
In its first season in the ACC, Syracuse has posted a 7-6 record in conference and 18-8 overall. The Orange is led by Brittany Sykes’ 17.5 ppg and Brianna Butler’s 15.1 ppg. Before beating Boston College on Sunday, the Orange had lost two straight games, including a 24-point loss at home to Florida State—who Miami just beat on the road.

Hayes’ Career Day
Sophomore Keyona Hayes posted one of the best games of her career on Sunday against Florida State, tallying 22 points and eight rebounds. Against FSU, Hayes went 9-for-16 from the field and 4-for-5 from the line, while also swiping three steals.

Sterling Steps Up
Coming off the bench against Florida State, junior Necole Sterling poured in 14 points—matching her career high set in Miami’s second game of the season. Sterling’s performance marked her first double-figure scoring game since Jan. 1 against Penn.

Coverage
The game will be streamed live on CanesAllAccess on HurricanerSports.com. The game will also be broadcast on 90.5 WVUM, Miami’s student radio affiliate. On the call for WVUM will be Neil Swyer and Alex Somer.

Block Party
The Hurricanes rank third in the ACC with 4.5 blocks per game. Jassany Williams leads the group, ranking fourth in the conference with 42 blocks this season (1.7/game).

The Coach
Miami is led by head coach Katie Meier, who is in her ninth season at the helm of the women’s basketball program in Coral Gables. Meier has a record of 160-117 through eight-plus seasons at Miami and a career record of 236-163 as a head coach.

Looking Ahead
The Hurricanes play their second consecutive ACC home game against Wake Forest on Sunday, Feb. 23. Tipoff is set for 1 p.m. and will be televised on Sun Sports.