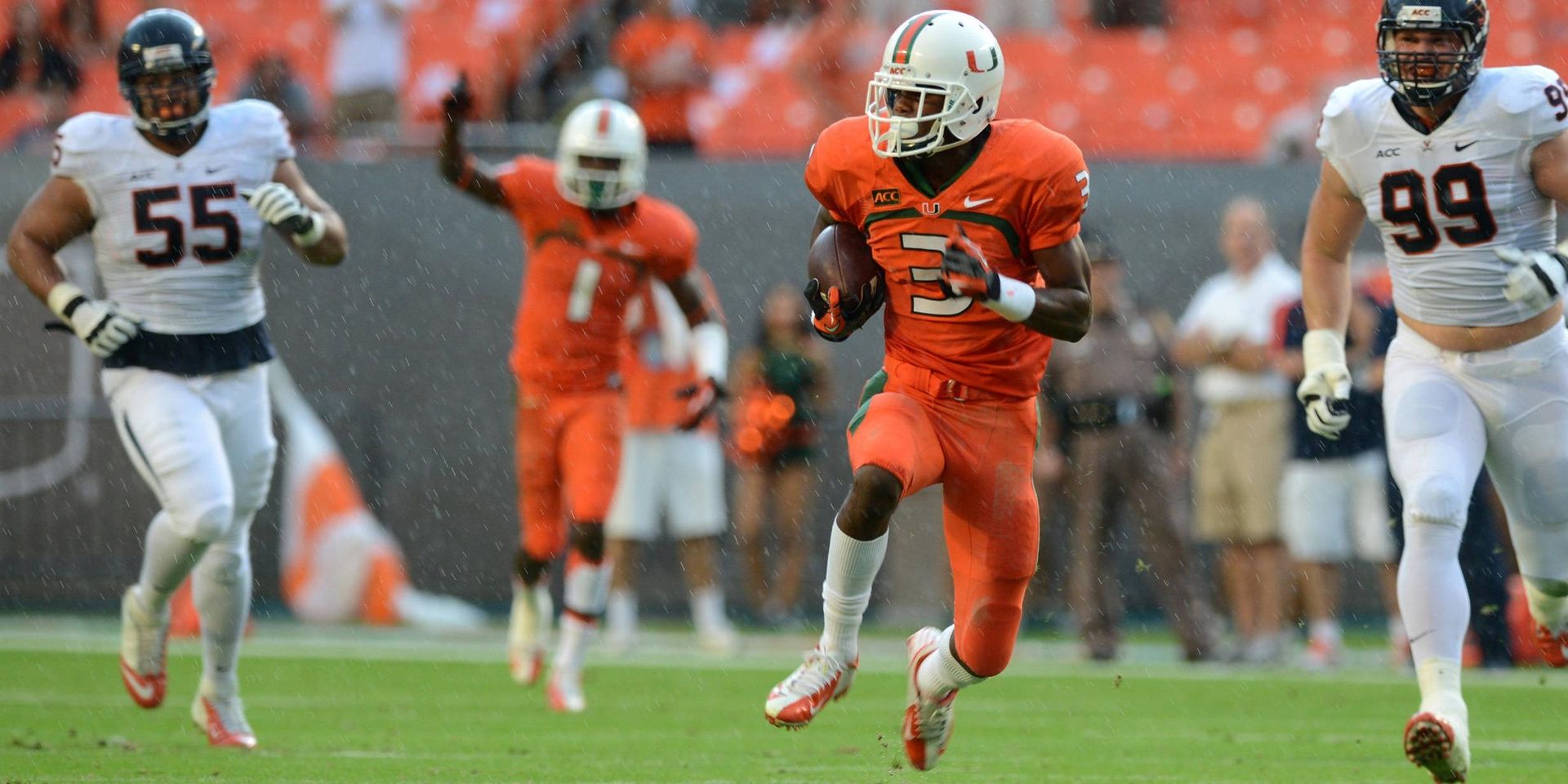 MIAMI, FLA. (AP) – Tracy Howard returned an interception 19 yards for a touchdown on the game’s first snap, the first of four scores created by Miami’s defense, and the Hurricanes kept their divisional title hopes alive by beating Virginia 45-26 on Saturday.

Stephen Morris passed for 214 yards and two touchdowns in his home finale for Miami (8-3, 4-3 Atlantic Coast Conference), who snapped a three-game losing streak. Dallas Crawford rushed for two touchdowns, Allen Hurns had 126 receiving yards and a score and Stacy Coley had a 62-yard touchdown catch for Miami.

David Gilbert ran a fumble back 72 yards for a touchdown in the final minutes for Miami. Both of Crawford’s scores were set up by interceptions, one by Ladarius Gunter late in the first half, the other by Kacy Rodgers II in the fourth quarter.

Taquan Mizzell had two touchdowns and Kevin Parks ran for 130 yards and a score for Virginia (2-9, 0-7), which has dropped eight straight overall and lost to Miami for the first time in four years. Starting quarterback David Watford completed 10 of 25 passes for 106 yards and a touchdown for the Cavaliers, but was intercepted three times, all of them getting turned into touchdowns.

Gunter was carted off with an undisclosed injury with 2:02 remaining. He had a helmet-to-helmet collision with Mizzell on a play where the Cavaliers freshman ran into the end zone from 7 yards out, remained on his feet for a few seconds, then fell to the ground.

A university spokesman said Gunter was airlifted to Jackson Memorial Hospital in Miami in an abundance of caution and for evaluation of an upper-body injury. Miami coach Al Golden said Gunter was moving his extremities and alert, and teammates said he was talking and joking with them while he was down on the turf.

Howard’s pick-six gave Miami a 7-0 lead a mere 6 seconds after kickoff, and another turnover kept the Hurricanes on top late in the first half.

Miami’s lead was 14-13 and Virginia was driving deep into Hurricane territory with less than 2 minutes before intermission, when Gunter intercepted a pass from Watford inside the red zone and ran it back 81 yards to the Virginia 3. Crawford scored three plays later, giving the Hurricanes a 21-13 lead at the break.

And with Virginia within 31-20 in the fourth, after Mizzell caught a 10-yard TD pass, Rodgers had an interception that set Miami up at the Cavaliers 16. Crawford finished off that drive two plays later.

For Miami to win the Coastal, it needs three outcomes next week: A win at Pittsburgh, a Duke loss at North Carolina and a Virginia Tech loss at Virginia.

A loss to Virginia would have doomed the ‘Canes, and Miami’s maligned defense – which had allowed at least 40 points in each of its previous three games – set the early tone.

And the turnovers more than negated a ton of stats that all overwhelmingly pointed Virginia’s way: The Cavaliers outgained Miami 483-304, had 28 first downs to the Hurricanes’ 11, and held the football for nearly 38 minutes.