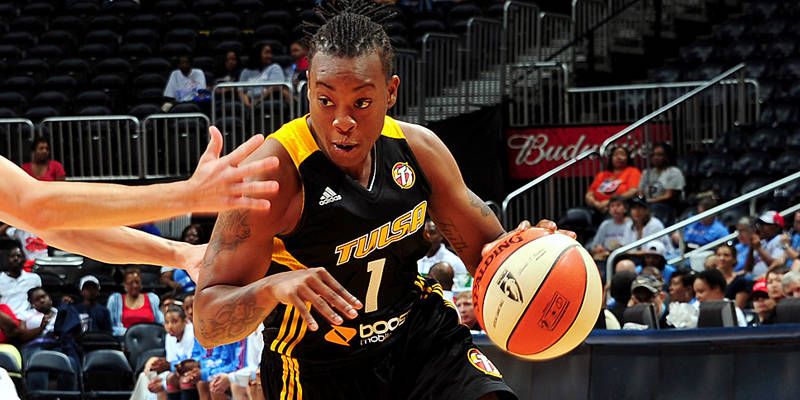 SAN ANTONIO (AP) Riquna Williams has always been able to score points in bunches, never though at the rate she did Sunday to set the WNBA record.

The second-year guard out of Miami surpassed the previous record of 47 points set by Phoenix’s Diana Taurasi against Houston on Aug. 10, 2006 and matched by Seattle’s Lauren Jackson against Washington on July 24, 2007.

“It’s amazing, I’m still speechless,” Williams said. “It feels great. This is only my second year in the league, so to capture that at such a young age and such a young player, it’s amazing. And I shot it pretty well; it wasn’t a bad shooting night.”

“She can flat out shoot the ball,” said San Antonio’s Shenise Johnson, Williams’ teammate at Miami. “She had that LeBron (James) look, that Kobe (Bryant) look in her eye. Everybody moved out of the way and was out there getting it done.”

With Williams approaching the record, fans were cheering for her to get the ball in the final minutes of the game on every possession. She tied the mark with a layup with 1:22 left in the game and then broke it with jumper 24 seconds later.

Williams added two emotional free throws with 5 seconds left for her final points after colliding knee-to-knee with Chelsea Poppins. The fans’ reaction was almost too much for Williams, a native of Pahokee, Fla., whose population of less than 6,000 was surpassed by the 6,650 in attendance.

“I kind of got a little teary (due to the fans’ cheering) even after taking the hit, so it was a combination,” she said. “I was able to hide it a little. But it’s great. I’m a small-town kid; this is my dream come true. I never thought I would be at this point.”

The 5-foot-5 Williams had 16 points in the first half, continually rising high above taller defenders for 3s and long jumpers. She hit a 21-foot jumper over Jia Perkins before draining a 3 to pull Tulsa within 33-25 with 6 minutes remaining in the second quarter.

Skylar Diggins added 20 points and Tiffany Jackson-Jones had 10 for Tulsa.

Tulsa took control in the second half outscoring San Antonio 59-22. Williams had 35 herself in the final 20 minutes.

“We didn’t show heart, we didn’t show pride,” Johnson said. “We didn’t represent what was on the front of our jerseys. Honestly, we’re all embarrassed.”

Williams, who scored 2,148 points at Miami, had 20 points in the third quarter, going 5 for 7 on 3s. Williams had a look of bemusement after soaring over the 6-foot-2 Shameka Christon for a 3 with 1.9 seconds left in the third, giving the Shock a 71-58 lead.

“She just got it through the natural flow of the offense. We weren’t isolating her or anything. She had the hot hand and was catching it on swings and she was just making plays.”

Williams hit consecutive 3s to give Tulsa a 59-54 lead.