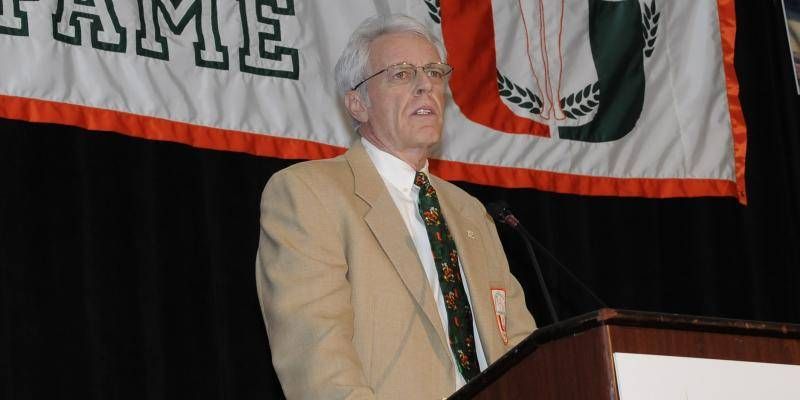 Wittman to be Inducted into Broadcasting HOF

Wittman, known as the “Father of Sports Aerial Broadcasting,” will be honored alongside fellow 2013 class inductees:

Wittman spent 42 years in sports broadcasting, spanning an era beginning with Frank Chirkinian and Harry Coyle and ending with the 2009 World Series on FOX with Bill Webb. Although Chirkinian was the first director to put a camera in the blimp, Wittman took that idea and refined it to where it is now a staple of nearly every major telecast. He has covered over 2,500 live sports events from the Goodyear blimp, including six Olympics, 30 World Series, 26 Super Bowls and dozens of college football games, most notably three of Miami’s national championship games. He stayed up for 60 consecutive hours while covering the 1989 Earthquake in San Francisco and also provided the first pictures of the 1996 Atlanta Olympic bombing.

A 2008 UM Sports Hall of Fame inductee, Wittman played three seasons for the Miami Hurricanes basketball team. As a sophomore in 1964-65, he played on the Miami team which established a then-NCAA record scoring average of 98.4 points per game. Playing for legendary Miami head coach Bruce Hale and teaming with All-America Rick Barry, that Miami team topped the 100-point mark 10 times that year, including tallying a school-record 148 points against Rollins College. A year later, Wittman, with Barry playing in the NBA, took over the leadership of the team, averaging 21.8 points a contest as a junior and 22.3 points per game as a senior, and being named team MVP both years. In his senior season of 1966-67, he shot 80 percent from the foul line and 48 percent from the field. In his three seasons at UM, Wittman helped the Hurricanes compile a 52-26 record.

He still ranks 15th in career scoring with 1,319 career points and he has recorded two of the top 11 scoring seasons in school history with 567 points as a junior in 1966 and 585 points in 1967.  His career field goal percentage of .473 still ranks 10th-best in Miami history and his 335 career free throws ranks eighth. He ranks sixth all-time in school history with 33 games of 20+ points, including four 30-point contests. He saved his best performance for last, leading the Hurricanes to a win over arch-rival FSU with a 20-point and 20-rebound effort in his final collegiate game.