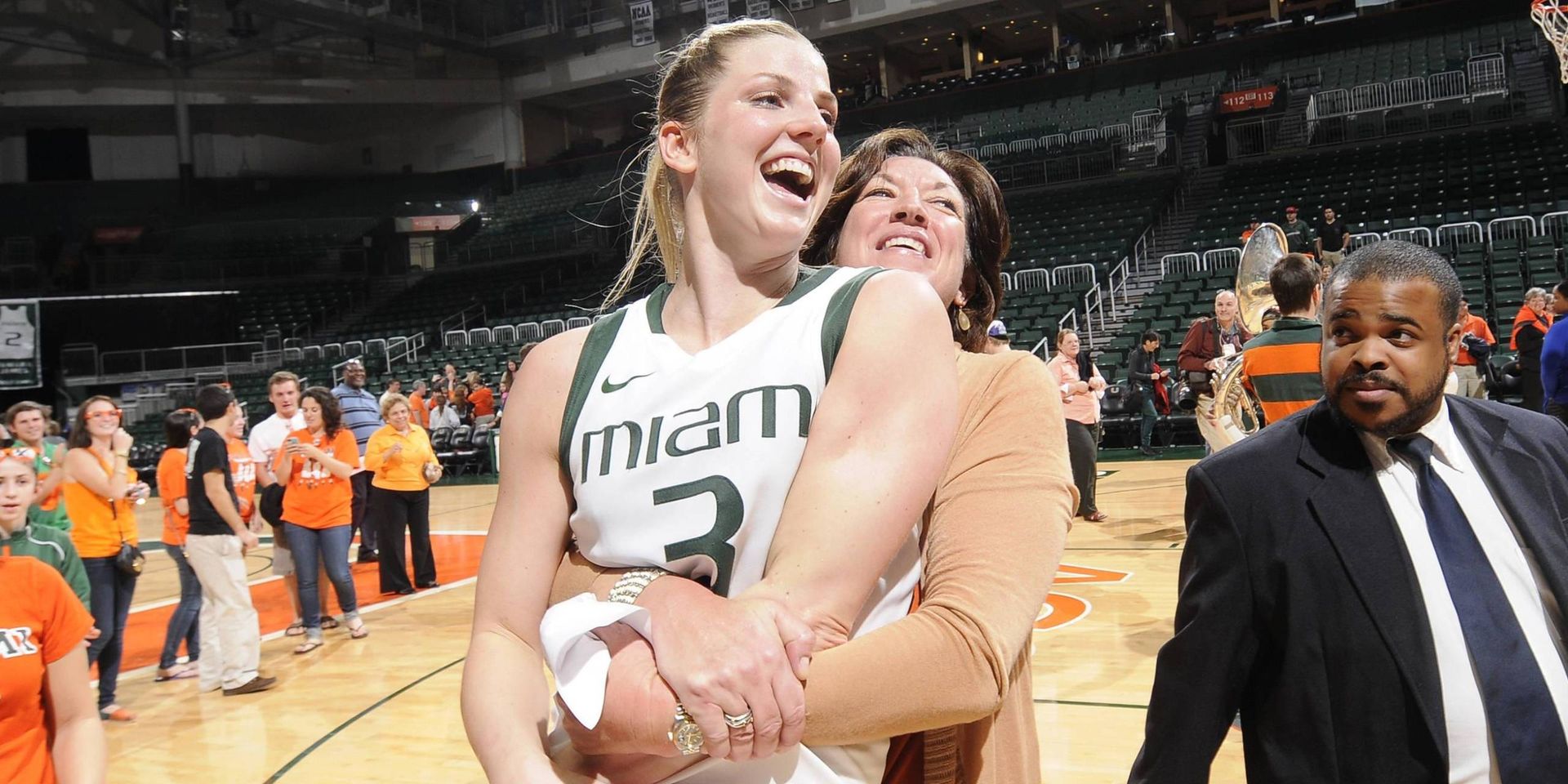 @MiamiWBB Goes Dancing As a No. 8 Seed

CORALGABLES, Fla. – The brackets are out and the Hurricanes areheaded to Iowa City.

The University of Miami women’s basketball team learned Monday nightat a selection show party on campus that they earned a No. 8 seed in the 2013NCAA tournament’s Norfolk Region. It is the second time in program history thatMiami is a No. 8 seed, joining the 1988-89 team.

“I thinkit’s huge to be back in,” Miami head coach Katie Meier said. “When you’rebuilding, you can do it quick and spike and then it goes away again or you canbuild a foundation. I think this proves that this program has a solidfoundation.”

With University of Miami president Donna Shalala and athletic directorBlake James in attendance, the Hurricanes saw their name pop up on the bigscreen at 7:25 p.m., while watching the live selection special on ESPN frominside the BankUnited Center.

“Finally we get to play again,” senior Morgan Stroman said. “It’s beenso long since we’ve played a game that I can’t wait to play again. One of mybiggest goals was to get to an NCAA Tournament my last year here and we didit.”

“Unfortunately, we have to have the mentality of playing on someone’shome court,” Meier said. “That is just part of the women’s game and drivingattendance and peak interest. We’ve done it before and we’re going to have todo it again. But, this is a seasoned team and we’ve played some great roadgames. I am expecting Iowa’s best game and I know they’re going to get ours.”

Should they advance, the Hurricanes will face the winner of the gamebetween No. 1 Notre Dame and No. 16 Tennessee-Martin.

“That’s the only No. 1 seed that doesn’t have home court,” Stromansaid. “The fans bring a different atmosphere to a game and I think it could begood to possibly play them at a neutral site.”

Miami guard Stefanie Yderstrom agrees that the opportunity to playNotre Dame on a neutral floor could help the Hurricanes as they try to make arun in the NCAA tournament. But they need to win in the first round before theycan think about dethroning a top seed.

“All the No. 1 seeds are really, really good so any little help we canget is good,” Yderstrom said. “I think we have a chance, but first we have tofocus on Iowa.”

The Hurricanes finished tied for fourth in the ACC with an 11-7record.  Of the 21 victories on Miami’s tournament resume, signature winsover No. 6 Penn State and No. 4 Duke stand out most.

“There were very few teams in the country that beat someone in the Top4 and we were one of them so we have that confidence,” Meier said.

Miami has made the most of their time off. Since being eliminated inthe ACC tournament, the Hurricanes have been working in preparation for thepostseason.

“We’ve spent the last week just working,” Meier said. “We have reallybeen very focused on our improvement. We talked about details, communicationand toughness because when we won big games we took care of those three things.”

Stroman believes the past week of work will go a long way towardsgetting the Hurricanes to achieve their goal of advancing in the NCAAtournament.

“We’ve been running and getting back into our best shape, getting ourlegs back under us,” Stroman said. “Now we can focus on playing Iowa. We haveto go out there and be aggressive and do what we have to do to win.”

For Yderstrom, Miami’s first round game was going to be challengingregardless of the opponent. A veteran of two NCAA tournaments, the senior guardknows the environment her team will face on Sunday and she believes they areready for it.

“It’s two teams that are going to play to survive, no matter what theseeds are,” Yderstrom said. “Every team is doing their best to stay in. It’sgoing to be hard and we’re playing on their home court.  It should be agood environment to play. I feel good about it.”