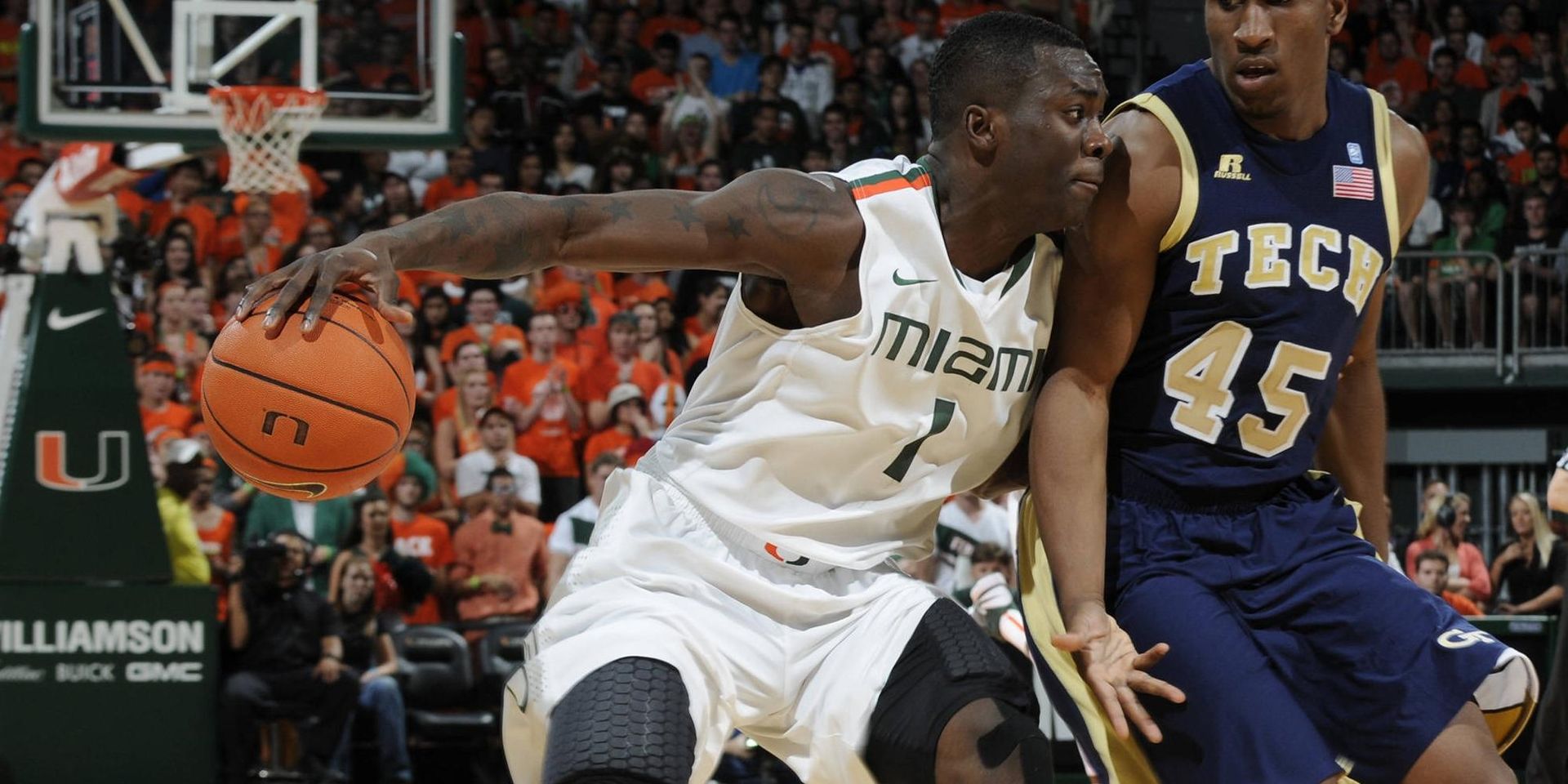 CORAL GABLES, Fla. (AP) – Marcus Georges-Hunt followed his own miss for the winning tip-in at the buzzer Wednesday night, and Georgia Tech rallied past Miami 71-69 to prevent the Hurricanes from clinching the outright Atlantic Coast Conference title.

The Hurricanes (23-6, 14-3 ACC), who squandered a 13-point lead in the second half, lost for the third time in four games and fell to 13-1 at home. They were already assured of a share of the title and can still clinch the championship outright by winning their regular season finale at home against Clemson on Saturday.

Julian Gamble’s three-point play with 12 minutes to go put Miami up 56-45 before the Yellow Jackets rallied, taking the lead on Chris Bolden’s layup following a steal with 3:38 to go.

After a basket by Tech’s Daniel Miller’s made it 69-all with 2:14 left, each team misfired. Robert Carter Jr. intercepted a pass by Durand Scott to set up the final possession with 35 seconds left.

Georges-Hunt drove into the lane and threw up a one-hander over Kenny Kadji that bounced off the rim. Georges-Hunt and Carter both appeared to get a hand on the rebound, and the tip-in was credited to Georges-Hunt for only his second basket of the game.

Tech stayed close by shooting 8 for 18 from 3-point range, including 6 for 10 in the second half. The narrow victory was a big turnaround for the Yellow Jackets, who had lost four league games by five points or less.

Kadji had 18 points and 11 rebounds for the Hurricanes while Scott had 17 points.

The near-sellout crowd, subdued for much of the night, came alive late in the game. As the Hurricanes’ lead dissipated, coach Jim Larranaga waved his arms and fist and screamed ”Let’s go,” desperate for defensive stops.

Offense was the bigger problem. Miami went 5 minutes without a field goal down the stretch and shot 36 percent in the second half.

The Hurricanes made six consecutive shots, capped by Kadji’s 3-pointer, during a 14-0 run that put them ahead 25-14 midway through the first half. The margin was 43-32 at halftime.

Starters for tonight’s game: Shane Larkin, Durand Scott, Trey McKinney Jones, Kenny Kadji and Julian Gamble. Miami, who shot 73.7 percent from the free throw line, recorded its third straight game  (82.4% at Duke, 73.3% vs. VA Tech) shooting better than season average of 66.5 percent overall and 64.9 percent in the ACC. The Hurricanes have shot better than 45 percent in 31 halves and 19 games overall, this season. With 18 points and 11 rebounds, Kenny Kadji recorded his sixth double-double of the season. He has had back-to-back games with a double-double, including his 17 and 10 night at Duke. His previous back-to-back games this season with double doubles was against La Salle and at Georgia Tech. Kadji has now scored in double digits in 24 games, has shot better than 43 percent from the field in 18 outings, and better than 40 percent from distance 12 times. He has hit multiple 3-pointers in 13 games, hitting a three in all but six games. Kadji has grabbed at least five rebounds in 22 games. He has recorded more or equal offensive rebounds than defensive rebounds in five games. He has blocked a shot in all but six games. With seven assists vs. Georgia Tech, Shane Larkin has now dished out three or more assists in 25 games, five or more 15 times and nine once. He has shot 50 percent or better from the field in 17 games and at least 55 percent in nine of last 13 outings. Trey McKinney Jones knocked down a pair of three pointers against GT, now hitting multiple treys in 13 games. Durand Scott notched 17 points against GT, his 20th game this season in double-digits. Going 2-3 from distance, he has now drained multiple 3-pointers in nine games. Scott also grabbed five rebounds, an assist, a block and a steal. Julian Gamble recorded 11 points, five rebounds and two blocks against the Yellow Jackets. He has now scored in double digits in seven games this season and has blocked a shot in 17 of his last 19 games and 21 total games.  He has recorded multiple blocks 17 times.