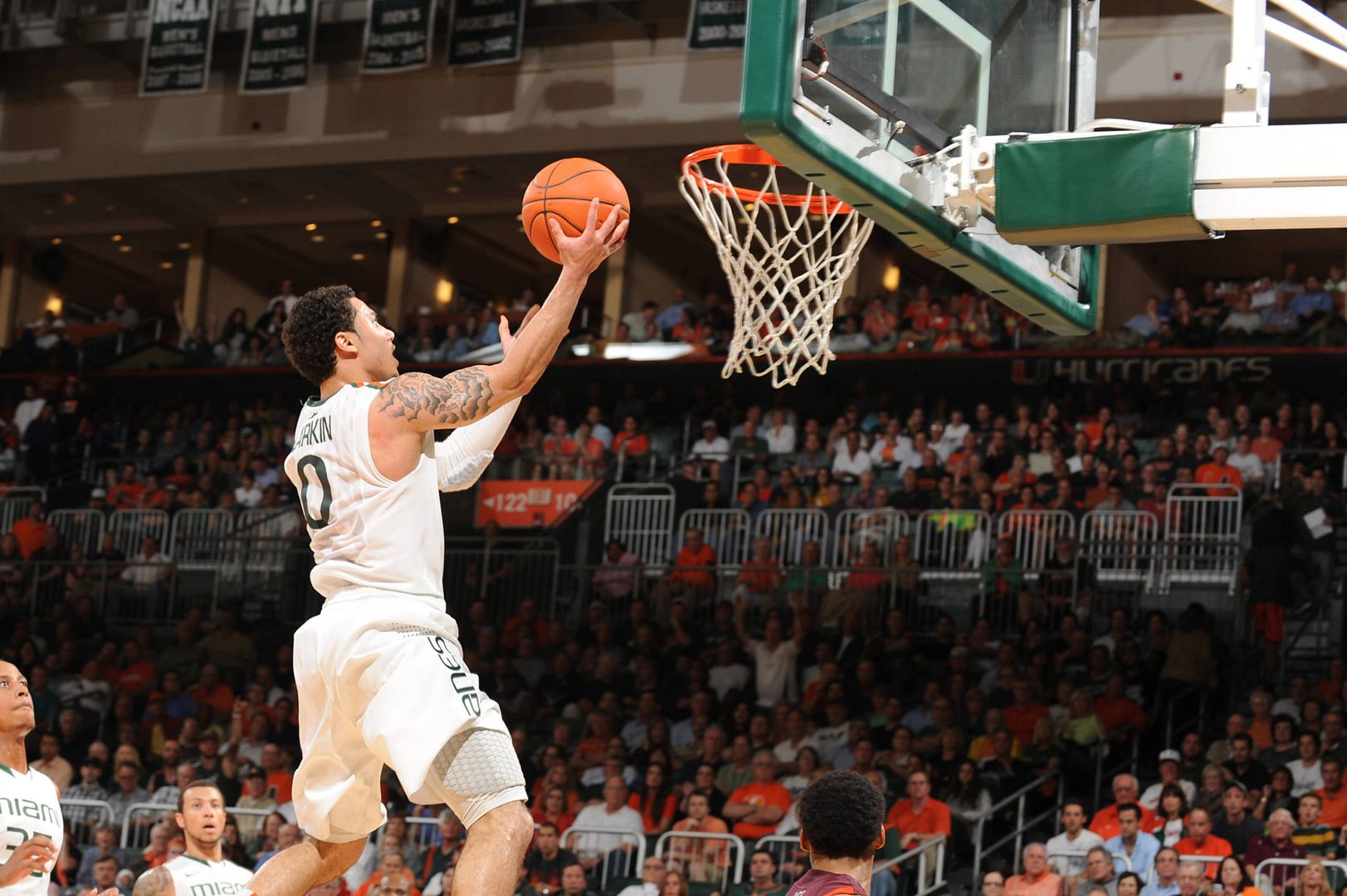 CORAL GABLES, Fla. (AP) – No. 5 Miami went 11 minutes without a basket Wednesday night, then finally shook a 10-day scoring slump and pulled away from Virginia Tech for a 76-58 victory.

Shane Larkin had 22 points and six assists to lead the Hurricanes, who were coming off a loss at Wake Forest that ended their 14-game winning streak and their bid to go unbeaten in the Atlantic Coast Conference.

Despite a slow start, Miami (23-4, 14-1) never trailed and improved to 13-0 at home. The Hurricanes hold a 2 1/2-game edge over second-place Duke in the ACC and can clinch their first conference basketball championship by beating the Blue Devils on Saturday.

Virginia Tech (12-16, 3-12) fell deeper into last place in the league. Erick Green, the nation’s leading scorer at 25.2 points per game, took a painful spill in the first half and scored only 16 – just the third time this season he has been held below 20.

The Hurricanes had averaged only 54.7 points over their past three games and again sputtered at the outset, but led 15-14 despite committing five consecutive turnovers and missing seven straight shots.

Then the onslaught began against the Hokies, who were 18-point underdogs.

Larkin led the way, and not only because of his smothering defense against Green. On consecutive possessions early in the second half, the point guard hit a one-handed runner, sank a 3-pointer and fed Durand Scott for a fast-break layup and a 49-28 lead.

Kenny Kadji had 20 points, six rebounds and two blocks, while Trey McKinney Jones added 11 points and three steals. Scott, a senior, was held out of the starting lineup for disciplinary reasons. He missed the first 4 minutes and scored nine points.

Five home wins in the league by Miami have been by at least 18 points.

Green gave the Hokies a scare when he hurt his left side losing the ball and falling in the first half. He went to the bench grimacing but popped a pill and was back in the game a minute later.

Green shot 6 for 13, including just one 3-pointer, and had three turnovers. The Hokies shot 3 for 16 from 3-point range.

The Hurricanes scored on their first five possessions to grab a 9-2 lead. After their offense stalled, they launched a 23-5 run that included 10 points on the final four possessions of the first half for a 38-19 lead.

Miami Hurricanes tickets can be purchased at CanesTix.com or by calling the BankUnited Center Ticket Office at 305.284.2263. The ticket office is open Monday-Friday from 8:30 a.m. – 5 p.m.

Tonight’slineup was the first lineup change for the Hurricanes since Dec. 23, 2012 vs.Arizona in Hawaii. That lineup was Shane Larkin, Durand Scott, Rion Brown,Kenny Kadji and Julian Gamble.

TheHurricanes are 13-0 at the Bank United Center in 2012-13 and are 120-47 overallin the BUC. The Hurricanes have notched double-digit home wins at theBankUnited in six-straight seasons and nine times in 10 full seasons callingthe arena home.

Miami,who shot 50 percent from the field against VT, has had three ACC home games inwhich the Hurricanes have made half of their attempts.

Miamihas shot better than 42 percent from the field in 12 of 13 home games.

Miamiled Virginia Tech by 19 at the half, the first time leading by at least 15points at the break since +17 against UNC and +23 against Duke.

ShaneLarkin scored Miami’s first bucket, and the Canes are now 4-0 when he scoresfirst.

ShaneLarkin, who had six assists for the game, has had eight games this season with sixor more assists.

KennyKadji, who made three 3-point field goals, has had four games this season withthree or more trey in a game.