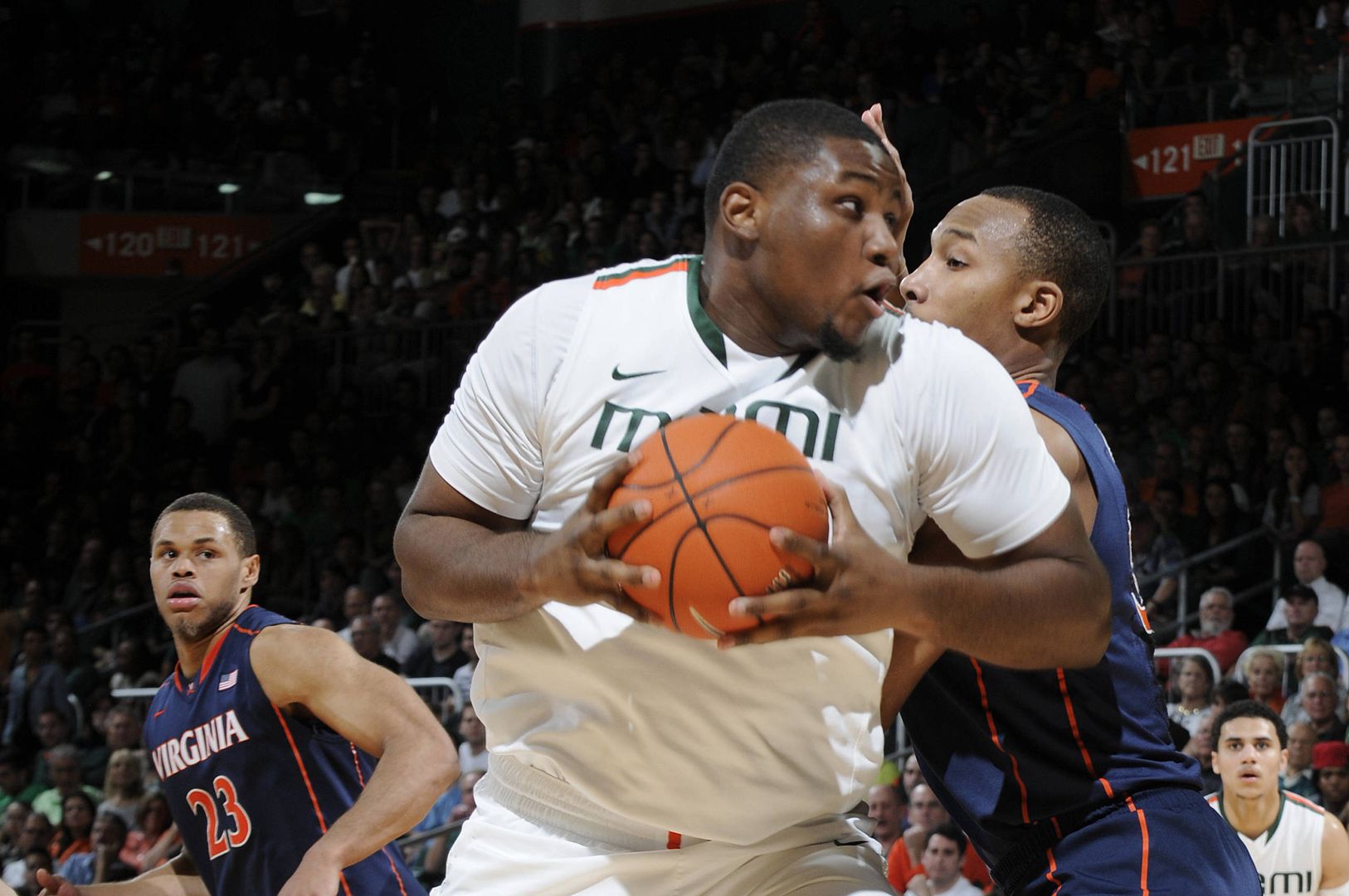 CORAL GABLES, Fla. (AP) – Reggie Johnson made a tie-breaking layup with 5.7 seconds left Tuesday night, and the No. 2-ranked Miami Hurricanes overcame a ragged offensive performance for the second game in a row to beat Virginia 54-50 and remain unbeaten in the Atlantic Coast Conference.

Durand Scott added two clinching free throws with four seconds to go for the Hurricanes, who earned their 14th consecutive victory. The win came two nights after they rallied late to beat Clemson 45-43.

The Hurricanes (22-3, 13-0 ACC) improved to 12-0 at home. They hold a 3 1/2-game edge over second-place Duke in the ACC as they chase their first league basketball championship.

After a timeout, Miami’s Shane Larkin spotted Johnson open under the basket, and the senior center made a reverse layup. Paul Jesperson’s inbounds pass was intercepted by Scott, who was fouled and made both free throws.

Defense kept the Hurricanes in front on a night when went 1 for 7 from 3-point range and struggled against a Virginia defense ranked fourth in the nation.

Miami held the Cavaliers to 39-percent shooting and blocked seven shots. Julian Gamble had four blocks, including three on one possession.

Joe Harris, one of the nation’s top outside shooters, had 16 points for Virginia but only one 3-pointer. He extended his streak of treys to 16 consecutive games by sinking one in the final minute.

The Hurricanes held a league opponent to 50 points or less for the sixth time. They’re 4-0 in ACC play in games decided by four points or less.

Miami climbed on Monday to No. 2 in the rankings, best in the program’s history. For two weeks the Hurricanes have been the only unbeaten team in league play among the major conferences.

Their ACC start is the best since Duke went 16-0 and won the conference in 1999.

Larkin had 11 points, including four in the final 42 seconds, and six assists. Rion Brown added 10 points off the bench in 25 minutes. Gamble had eight points and seven rebounds in 20 minutes.

The Hurricanes started fast on offense, working the ball inside and shooting 5 for 5 in the first 3:21. But points were tough to come by after that.

Instead it was Miami’s defense that had a sellout crowd roaring, especially when Gamble blocked three consecutive shots by Akil Mitchell.

The Cavaliers trailed by seven points early and took their only lead seven minutes into the second half. Brown answered by making three consecutive free throws after being fouled on a long attempt, then sank a 3-point shot to put the Hurricanes ahead 36-29. That matched their largest lead.

With the win over Virginia, Miami has now defeated all 11ACC opponents during the Coach L era.

Miami has shot better than 42 percent from the field in 11of 12 of its home games.

Miami is the only Power 6 school undefeated in conferenceplay.

Julian Gamble had the Hurricanes first point, rebound, andblock of the night.

Julian Gamble tied his career high in blocks with four inthe first 16:10, including three in the same possession.

The Canes limited Virginia to just one trip to the foul linein the first half.

Miami’s streak of not trailing in the BankUnited Centerended with 13:06to go in the secondhalf.  The last time the Canes trailed inCoral Gables was with 9:46 to go in the first half of the Duke game on Jan. 23.

Julian Gamble has had at least six rebounds in 13 games(nine ACC), this season, including seven tonight.

Shane Larkin led Miami with five assists.  Larkin has had four or more handouts in 16games this season with five or more in nine of 13 ACC games.

Single-game tickets are on sale and can be purchase at CanesTix.com or by calling the BankUnited Center Ticket Office at 305.284.2263. The ticket office is open Monday-Friday from 8:30 a.m. – 5 p.m.