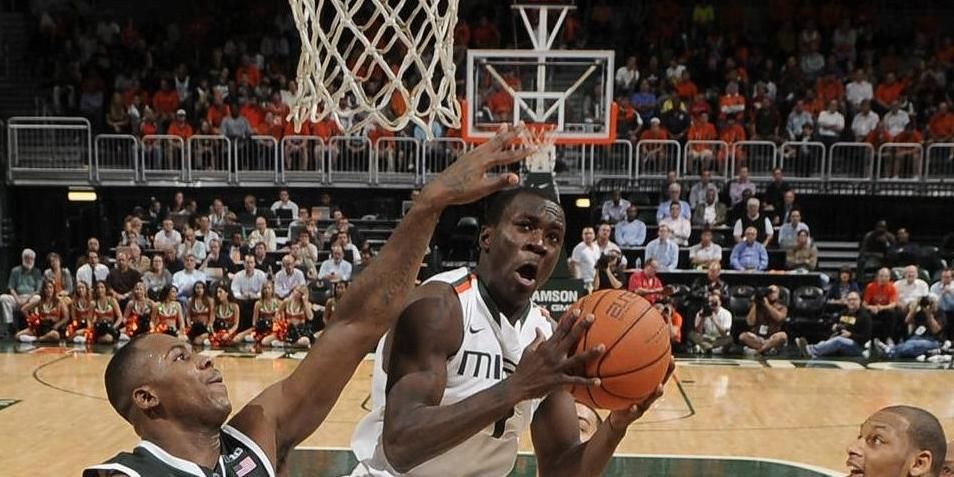 Olivier Hanlan, who led Boston College (9-8, 1-3) with 17 points, was fouled shooting a 3-pointer with a half-second left. The first two free throws rolled in but Hanlan front-rimmed the last one. The ball was tipped in the lane and the horn sounded.

Lonnie Jackson added 16 points for the Eagles and Ryan Anderson had 11.

Scott’s two free throws had given the Hurricanes a 58-57 edge with 25 seconds to play. After the Eagles called timeout to set up a play, Scott drew an offensive foul near midcourt from Joe Rahon, appearing to take an elbow up high.

With Boston College clinging to a one-point lead, the teams traded misses before Scott stole Hanlan’s pass in front of the Eagles’ bench and drove to the basket for a miss, but Kadji had the put-back to push Miami ahead 56-55 with 1:36 to play.

After a timeout, Hanlan was fouled and hit both ends of a 1-and-1, moving the Eagles back in front with 67 seconds left.

Miami’s Rion Brown then missed a jumper from the left wing, but Hanlan missed the front end of a 1-and-1 before Scott was fouled and nailed his two from the line.

BC trailed 36-34 early in the second half before Patrick Heckmann nailed a 3 from the right corner for his only basket of the game. Hanlan had a three-point play on the next possession and Anderson followed with two free throws, pushing BC ahead 42-36 with just over 12 minutes to play.

Miami, coming off solid wins at Georgia Tech, at North Carolina and Maryland, respectively, then stayed close thanks to some decent long-range shooting, nailing three shots from beyond the arc over the ensuing 6 minutes.

The Hurricanes cut it to 51-50 on McKinney Jones’ free throw with 3:34 to play, the first of three times they closed it to one point.

The Eagles came out cold from the field in the opening 5 minutes of the second half, missing six of their first seven shots, but Miami didn’t fully capitalize.

The Hurricanes did turn a two-point halftime deficit into a 36-31 lead by scoring 10 of the initial 13 points to start the half, but Jackson nailed a 3 from the right corner, closing it to two points with 14:18 to play.

Gamble had six points during the Hurricanes’ spree to start the second half.

The Eagles took a 28-26 lead into intermission after Anderson’s layup with 32 seconds left in the half.

BC seemed to dictate the pace for much of the opening half, running the shot clock down into single digits on most possessions.

Neither team held more than a two-possession lead in the slowly paced half that featured relatively few fastbreak chances. Both schools had zero fast-break points in the opening 20 minutes.

Rahon rolled his right ankle early in the game, went to the locker room and returned about 3 minutes later.

The Hurricanes, who were down at halftime 28-26, are now 4-2 this season when trailing at the break.

Miami shot 41.5 percent in the game against Boston College, the 12th time Miami has shot better than 40 percent in a game this season.

The Hurricanes have hit seven or more 3-pointers in nine games this season, including seven at Boston College.

Shane Larkin recorded five assists against the Eagles, the ninth game this season he has had four or more assists.

Kenny Kadji, who finished the game with 14 points, has had double digit scoring in 13 of the 16 games this season, including seven straight games.

Durand Scott scored nine points in the first half and 15 points for the game. Tonight’s game was his best outing since his 18-point performance against La Salle on Jan. 2.

Raphael Akpejiori recorded a season high in points with four, after scoring only seven points in his first nine games this season. His previous high was two at Georgia Tech on Jan. 5, 2013.