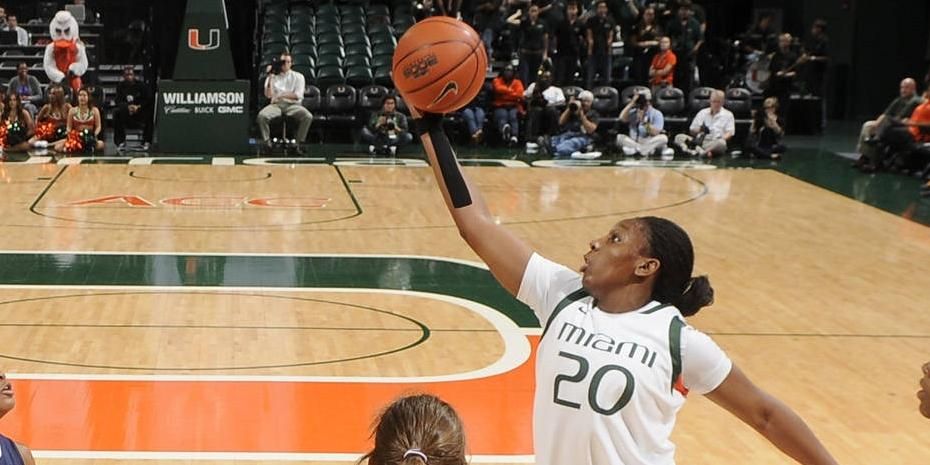 Leading their conference with a defense that allowsits opponents to shoot just 31 percent from the field, the Hurricanes (9-2) limitedthe visiting Blue Devils (5-5) to just a 25.5 shooting percentage.

The UM defense also forced its opponents into 31turnovers, converting them into 32 points.

For the second consecutive game, Stefanie Yderstromled the Canes in scoring, pouring in 18 on the night. Shawnice “Pepper” Wilsonadded 12 points and seven rebounds in the winning effort.

Freshman forward Keyona Hayes came off the bench andhad a huge game, scoring 11 points and grabbing a season-best 15 rebounds to gowith a pair of steals. The double-double ties the Marietta, Ga., native withWilson for a team-leading third of the season.

Another freshman, Macy Keen made her presence felt onthe defensive end, swatting away three shots for the second straight game.Sophomore Michelle Woods led the Hurricanes with four assists and four stealson the evening.

Yderstrom scored seven of Miami’s first 11 points, ina half that was never really close. The Canes built a 39-17 heading into thelocker room.

Miami will face Wisconsin in the tournament final at7:05 p.m. It will be the first matchup between the two programs. The Badgerseasily defeated Delaware State, 83-54, in Friday’s first contest. The Hornetswill face Connecticut State in the consolation game at 5 p.m.