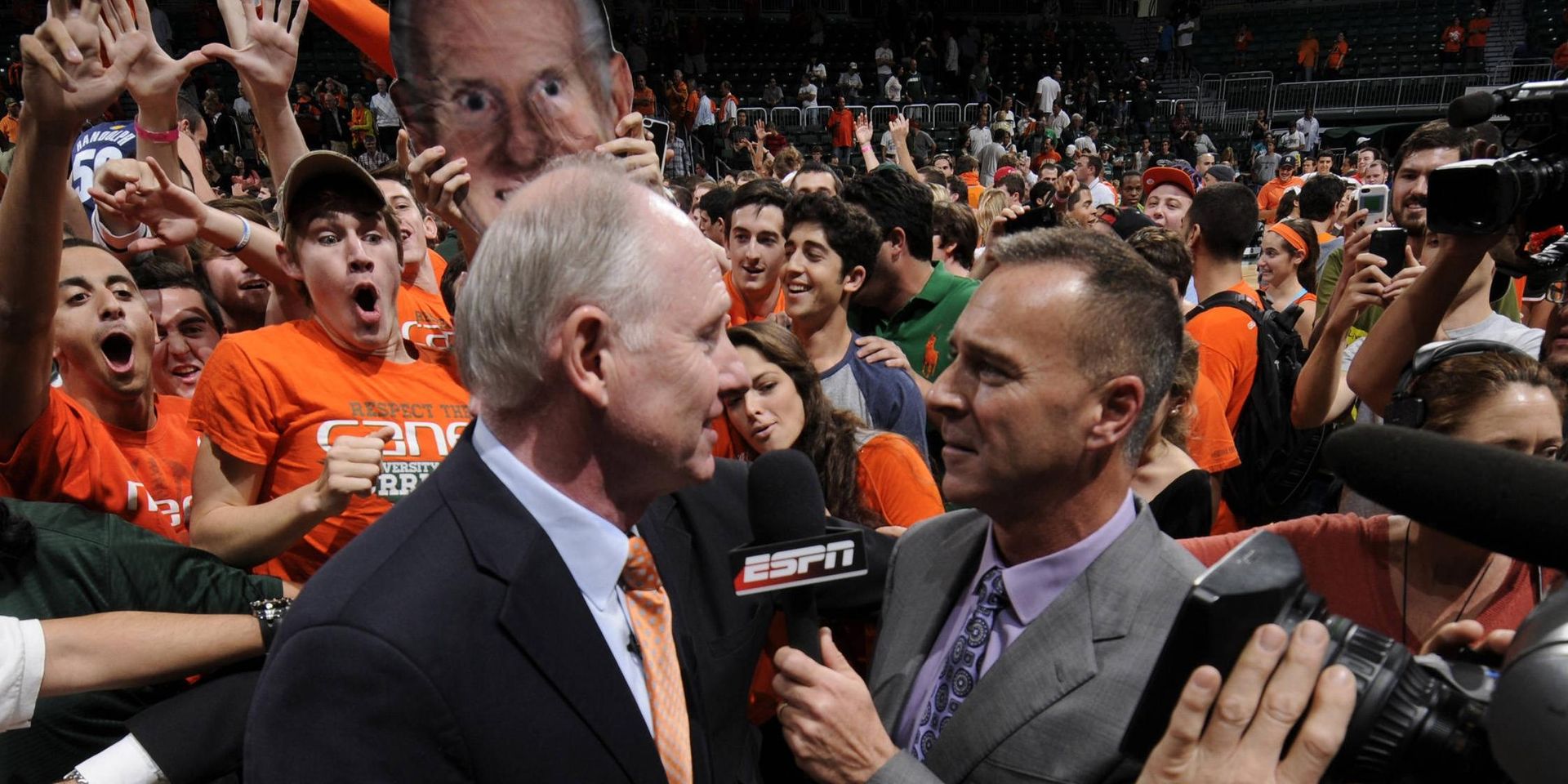 CORAL GABLES, FLA.  (AP) –  The attendance-challenged Miami Hurricanes drew a sizable, boisterous crowd for Wednesday night’s game against No. 13 Michigan State. And when it ended, many of the fans stormed the court in celebration.

Senior Trey McKinney Jones scored a career-high 18 points and Miami held Michigan State without a field goal for a pivotal 5 1/2-minute stretch in the second half in a 67-59 victory.

Miami (4-1) held the ball in the final seconds to run out the clock, and students in the crowd of 5,791 then swarmed around their team at midcourt.

“I was thinking, `This is what college basketball is all about,'” coach Jim Larranaga said. “In fact, what I was really thinking was, `This is what being a college student is all about.’ Your greatest memories don’t come in the classroom. They come at events like this that you’ll remember years down the road.”

The Hurricanes’ second-year coach has worked hard to boost attendance, dispatching his players to dormitories to distribute pizza and chicken wings.

But Larranaga knows winning is the best way to create a bandwagon.

“This was November’s highlight,” he said. “Now we need to get some December highlights.”

In the postgame frenzy, fans hoisted the team mascot and guard Durand Scott on their shoulders and chanted, “A-C-C.” The game was part of the ACC-Big Ten Challenge.

“Kudos to our fans, man,” center Reggie Johnson said. “They really helped us come out on top. They were rocking.”

Keith Appling had 15 points for the Spartans (5-2), who lost for the first time since the season opener against Connecticut.

Two Michigan State players – Gary Harris and Travis Trice – returned from injuries, and while coach Tom Izzo was glad to have them back, he was unsure how to tweak his substitution pattern.

“That was a hard game to coach,” he said. “I didn’t know how to approach it, and I probably didn’t do a great job. It’s going to get better once we get our rotation down. I still like where I think we’ve got a chance to go, but I sure don’t like it right now.”

The Spartans cut down on their turnovers – they had 12 after totaling 20 in each of the past two games. Even so, they struggled with their half-court offense, and stayed in the game only because they had 16 offensive rebounds.

Michigan State trailed 48-42 with 10 minutes left, then went without a basket until Branden Dawson scored to cut the deficit to 57-47 with 4:55 left.

Michigan State’s point total was a season low. Izzo’s team was outscored 40-28 in the second half, when it went 11 for 30 from the field.

Scott and Shane Larkin scored 15 points apiece for the Hurricanes, who went 9 for 16 from 3-point range and had only nine turnovers. Johnson had 10 points and 11 rebounds.

Harris had 12 points for the Spartans, and Dawson added 11.

Scott penetrated easily at the outset and scored nine consecutive points to help Miami take the lead. Trice and Harris hit 3-pointers on consecutive possessions to give the Spartans their biggest lead, 28-23, and they were up 31-27 at halftime.

“We took a few punches from Michigan State,” Larranaga said. “We needed to fight back, and we did.”

“Every one of my 3s came from a pass,” he said. “My teammates were just finding me in the right spot.”

Scott’s two free throws gave the Hurricanes their biggest lead at 57-45, and thereafter Michigan State got no closer than eight points.

“It’s not the highlight of our season,” Johnson said. “It was a heck of a game, but we have to continue to get better.”

• Trey McKinney Jones led all scorers with a career-high 18 points.

• Durand Scott has scored in double digits in 10-straight games.

• Trey McKinney Jones had a career-high five three-point field goals, his previous best was three, which he had done five times.

• Reggie Johnson tied season-highs with 11 rebounds and three blocked shots as he now leads the team in both categories with 41 and six, respectively.

• Kenny Kadji blocked two shots to tie a season-high and share the team lead of six.

• Shane Larkin had a season-high four steals as he now leads the team with eight.

• Miami is 2-5 against non-conference ranked opponents, 1-2 at home.

• Under Coach Jim Larranaga, UM is 2-2 at home and 3-6 overall against ranked teams.