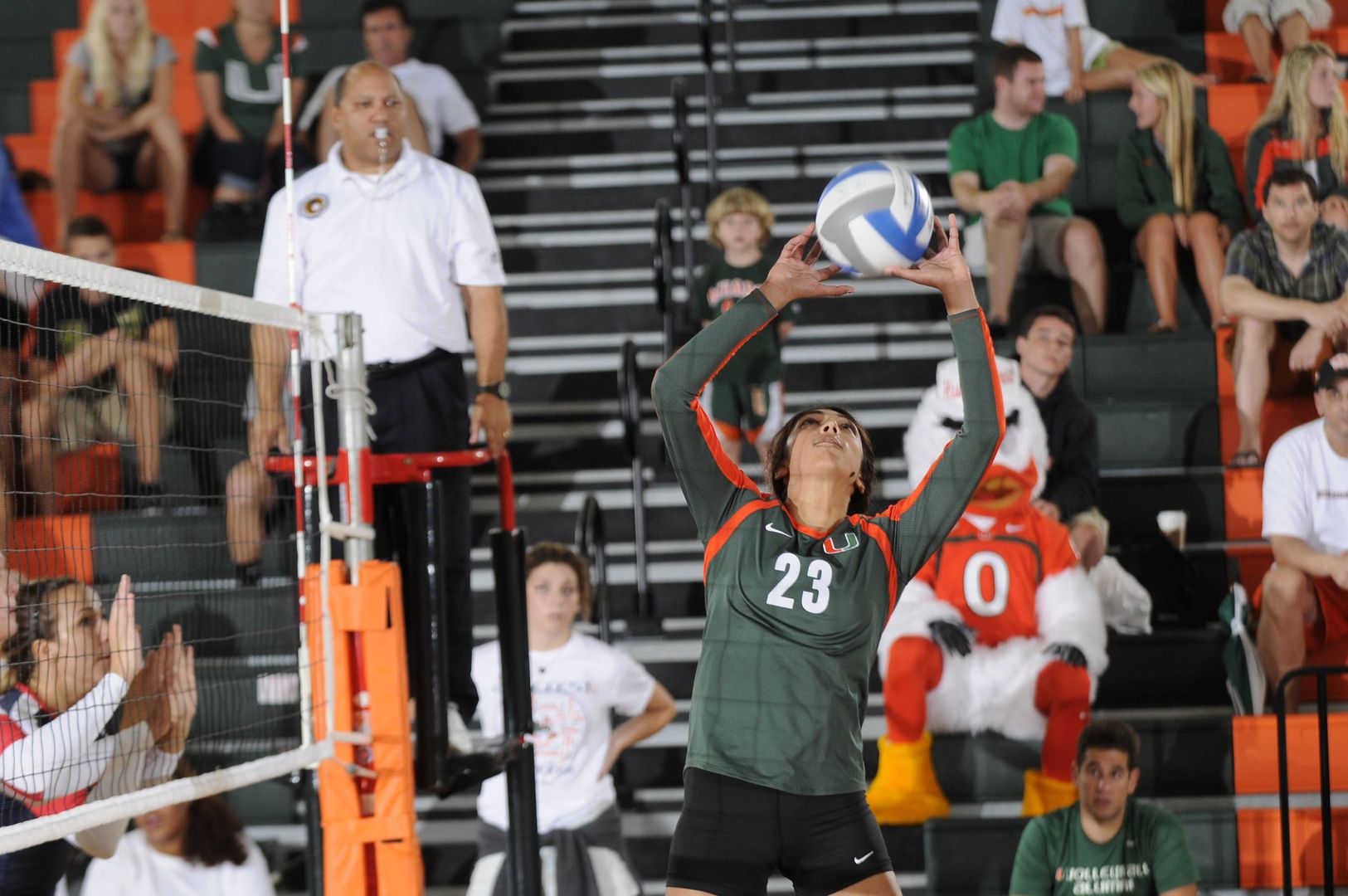 First-Place Volleyball Holds Off BC in Five

CHESTNUT HILL, Mass. – The University of Miamivolleyball team extended its winning streak to six matches with a hard-fought3-2 victory over Boston College at Power Gym on Sunday. The Hurricanes remainin a tie for first place with Florida State and have now won both five-setmatches it has played this season.

Juniorright side Alex Johnson (16 kills, 17 digs) and senior setter NrithyaSundararaman (47 assists, 10 digs) picked up their fifth and eighthdouble-double, respectively, of the season to spark the Canes. Sophomoreoutside hitter Savanah Leaf recorded 16 more kills to bring her weekend totalto 29 in two matches. On the front line, sophomore middle blocker AlexisMourning led the team with six total blocks, as UM put down 14.5 total teamblocks on the day.

Juniorlibero Ryan Shaffer notched 30 digs in the contest to help hold the Eagles to a.184 clip. Miami entered the weekend ranked first in the league in opponenthitting percentage.

Thematch featured 26 ties and 11 lead changes, with 11 ties in the opener. BostonCollege jumped out to a 14-10 lead in the first set and looked poised to takethe frame with a 24-22 advantage. However, the Canes fought back with acombined block from sophomore middle blocker Emani Sims and junior outsidehitter Taylor Hollins for their 23rd point and the Eagles made anerror to knot the score at 25.

UMfound itself facing set point for the third time following a service error, butHollins put down a kill to even it out once again. Next, Mourning andSundararaman combined for blocks on the subsequent two points to give theHurricanes the 1-0 match lead.

BostonCollege ran out early to a lead in the second set and held on to even the matchat one.

Inthe pivotal third, the teams split the first 32 points with Miami then winningthe next two to go up 18-16. The Canes continued to make it a 9-2 run to takethe 2-1 advantage. Nevertheless, the Eagles responded to even the match with adecisive fourth-set win.

Playingin a fifth set for the first time on the road this season, the Canes gained theimportant early momentum with a 9-4 lead. That advantage would hold up, withMourning collecting a block solo to give Miami its third road conference winand keep pace in the standings.

CourtneyCastle registered a match-high 22 kills for BC, while Kellie Barnum had 48assists.

TheCanes will continue on the road next weekend, facing Clemson (ESPN3) on Fridayand Georgia Tech (RSN) on Sunday.