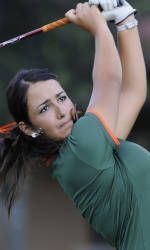 Miami Posts 301 After First Round of UCF Challenge

CORAL GABLES, Fla. — The University of Miami women’s golf team kicked off its spring campaign Sunday, with a 13-over-par 301 which landed the Hurricanes in 13th place after the first round of the UCF Challenge played at RedTail Golf Club in Sorrento, Fla.

Play was delayed 30 minutes due to potential frost and players teed off in the low 30’s as temperatures only topped at 50 degrees all day.

Despite unusual Florida weather, freshmen Leticia Ras-Anderica, from Moraira-Teulada, Spain, was the low shooting Cane firing an even par 72. Ras-Anderica is tied for 13th place after the first round. Her round included four birdies on the 5th, 7th, 11th, and 17th, and four bogeys on the 1st, 4th, 10th, and 18th holes.

Jennifer Hirano, a senior from Pinole, Calif., finished one stroke behind at one-over 73 and is tied 22nd. Freshman Rika Park from Fujieda Shi-Shizouka, Japan, carded a three-over 75 and stands in 45th place. Sophomore Carina Cuculiza and freshmen Shannon Pak rounded out the Hurricanes lineup. Cuculiza is tied for 92nd and scored a nine-over 81 and Pak shot a 10-over par and is currently tied for 95th.

Hayley Davis of Baylor and Victoria Trapani of Auburn share the individual lead after both fired a four-under 68 in the first round. In third are Augusta State’s Casey Kennedy and Tulane’s Maribel Lopez Porras who finished one stroke back of first after both carding a 69 in the first round. An eight player tie for fifth place include Ashleigh Albrecht (Kentucky), Brittany Henderson (Coastal Carolina), Suzie Lee (South Carolina), Kelli Pry (South Florida), Marta Sanz (Auburn), Stani Schiavone (Baylor), Valerie Sternebeck (Baylor), and Nicole Vandermade (Texas) all going one-under 71.

The second round of the UCF Challenge gets underway Monday, Feb. 13 at 9:30 a.m. (ET) with live scoring available via GolfStat.com.