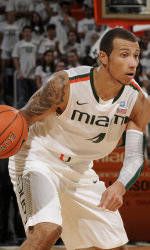 CORAL GABLES, Fla. – Individual game tickets for the 2011-12 Miami Hurricanes men’s basketball season at the BankUnited Center will be available to the general public beginning Thursday, Dec. 15, as announced by the Hurricane Ticket Office.

Miami enters the season primed for another competitive year in the Atlantic Coast Conference. The Hurricanes’ next game at the BankUnited Center is Dec. 30 against Appalachian State, followed by another home contest against UNC Greensboro on Jan. 2.

The most anticipated game of the season, moved to a primetime broadcast on ESPN and an 8 p.m. tip-off, takes place against fifth-ranked North Carolina on Feb. 15.

The Hurricane Ticket Office has also introduced “Coca Cola 3-Packs” – two separate packages for fans to attend some of the most anticipated matchups of the season at discounted rates. Both the Weekend 3-Pack and UNC 3-Pack deals are still available for purchase by clicking HERE.

Fans can purchase tickets by calling the Hurricane Ticket Office at 1-800-GO-CANES, or by clicking HERE.

For a complete look at the Hurricanes’ 2011-12 schedule, click HERE.