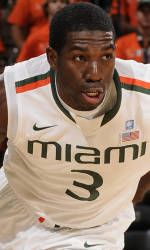 OVERLAND PARK, Kan.– University of Miami senior guard Malcolm Grant joins 60 NCAA® men’s and women’s basketball student-athletes who excel both on and off the court as candidates for the 2011-12 Lowe’s Senior CLASS Award.

To be eligible for the award, a student-athlete must be classified as an NCAA Division I senior and have notable achievements in four areas of excellence – community, classroom, character and competition. The complete list of candidates follows this release.

Grant, from Brooklyn, N.Y., is a Preseason All-ACC Player who led the ACC in three-point percentage, three-pointers made and free throw percentage, earning third team All-ACC honors. He currently is riding a streak of making a three-pointer in 23-straight games. With 155 career threes in just two seasons as Hurricane, Grant is in 10th place all-time in program history in triples made, while his 94 three-pointers last season were tied for second-best in Miami history. In his second season with Miami, Grant was among just two players to lead the ACC in as many as three different statistical categories — leading the league in three-point field goal percentage, three-point field goals made and free throw percentage. Starting all 36 games last season, the 6-1 guard has posted a team-high 29 double-figure scoring efforts, with eight games of 20-plus points, including a career-high 26 points in a win over West Virginia.

An acronym for Celebrating Loyalty and Achievement for Staying in School®, the Lowe’s Senior CLASS Award focuses on the total student-athlete and encourages students to use their platform in athletics to make a positive impact as leaders in their communities.

The 60 candidates will be narrowed to 10 finalists in both men’s and women’s basketball midway through the regular season, and those 10 names will be placed on the official ballot. Ballots will be distributed through a nationwide voting system to media, Division I men’s and women’s coaches and fans who will select one finalist who best exemplifies excellence in the four Cs of community, classroom, character and competition.

For more information on all the candidates, visit seniorCLASSaward.com.

ABOUT THE AWARD
An acronym for Celebrating Loyalty and Achievement for Staying in School®, the Lowe’s Senior CLASS Award honors the attributes of senior student-athletes in four areas: community, classroom, character and competition. The award program is designed exclusively for college seniors who are utilizing their complete athletic eligibility, remaining committed to their university and pursuing the many rewards a senior season can bring. The award is sponsored by Lowe’s, an official Corporate Partner of the NCAA, and is managed by Premier Sports Management.

ABOUT LOWE’S
With fiscal year 2010 sales of $48.8 billion, Lowe’s Companies, Inc. is a FORTUNE® 50 company that serves approximately 15 million customers a week at more than 1,725 home improvement stores in the United States, Canada and Mexico. Founded in 1946 and based in Mooresville, N.C., Lowe’s is the second largest home improvement retailer in the world. Lowe’s is an official Corporate Partner of the NCAA.