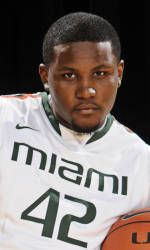 I was raised in Winston-Salem, N.C.
I started playing basketball my sophomore year of high school.
My favorite holiday is Christmas because I think it’s time to be with your family and give. I love giving.
Nobody knows that I can sing. Nobody besides my roommates. I sing in the shower.
To be a Miami Hurricane means is a great honor because of the legacy here so I am very proud to be a Hurricane.
The oddest nickname I’ve ever had is Big Johnson. That’s what my teammates made up.
If I wasn’t playing basketball I would be I would be in the Worldwide Federation of Wrestling. I would be wrestling right now. I’m like The Rock a little bit mixed with a little bit of Rock Legend.
When I was younger I wanted to be a firefighter. I had a thing for being a firefighter and saving lives.
My family is crazy! They’re my biggest fans. They always support me no matter what. They’re always going to help me out in my tough times,
Winning a game is everything. That’s why I play the game of basketball. It means a lot to me.
I secretly wish that Jay-Z didn’t have Beyonce and I could marry her.
Legacy something that is important to you as far as what do you want to be known as when you leave. When I leave Miami I want to be known as a guy who worked hard, played hard and brought excitement to the fans.
My favorite current UM athlete is Mike James on the football team. I love the way he plays. He plays with a passion. Mike James is a good dude overall so I’m pulling for him.
Blocking is what I do! I block shots. I swat them. When you go in that lane, expect to go into the stands because I’m blocking that shot!
Becoming a man is something I had to do coming to college. I could have gone to Wake Forest which is a closer school to where I’m from, but I felt like I needed to go away and veer off a little bit. In high school my mother still washed my clothes and cooked for me so I had to learn how to do things in school and now I feel like I’m more prepared for life.
The U is one of the best colleges in America, if not the best. There’s a lot of history in the program and it’s a well-known institution.
I’m afraid of two things: snakes and spiders. You can put snakes and spiders around me and I’ll tell you any type of secret.
After college I want to play in the NBA. Career-wise, I want to do something with kids. I want a Big Brother type of program with kids and get them going in the right direction and get them on the right path to do good things in life.
One thing everybody should know about Miami Basketball is this year the team will be on the rise. Everyone is returning and I really can’t wait to get out there and start competing.
At The U I’ve learned so much from my former coach, Coach Haith, who obviously is not here now. He taught me a lot about on and off the court things. That’s the guy I really learned a lot from coming down here and first being away from home.
The most influential person in my life is my mother and grandmother. They’re the two I always turn to when I need advice for most things. They always work hard for everything, they were never given anything. My mother supported me and my little sister by herself and sometimes she didn’t eat and that right there showed me what type of hunger you need just to survive in life.
In March I want to be dancing. I want to be out of class, dancing. I want to be in the tournament, just making the Hurricane family see excitement for the basketball tournament in March.
I never thought that I could be gone from my mother this long. I’ve been gone for four years and I’m always calling every day, but I’m adjusting.
Before every game I pray, always to the man above. I go through the same ritual doing the same thing over and over. I get the team going.
My favorite quote is “he who works the hardest reaps the greatest rewards.” That’s from my high school coach. He always used to say that.