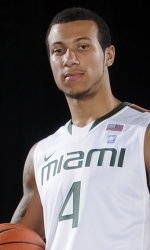 I was raised in Milwaukee, Wis.
I started playing basketball in the third grade.
My favorite holiday is Christmas because I get to see my family, all of my family.
Nobody knows that I can cut hair. I cut or line up a few guys on the team when they need it. I cut my own hair.
To be a Miami Hurricane means that you need to put it all on the table for The U.
Oddest nickname I’ve ever had is Virge, because of what my name was when I was born.
Right now I’m listening to the J. Cole album.
If I wasn’t playing basketball I would be I would be playing football somewhere.
When I was younger I wanted to be a professional basketball player, just like my uncle.
I secretly wish I didn’t have to take classes and could just be an athlete.
Legacy is the road to the top or the climax of your career.
My favorite current UM athlete is Julian Gamble because I’m probably the closest with him. He’s my roommate and after my visit he was the main one who texted me and called me to make sure everything was all right.
Becoming a man is necessary in order to become a college basketball player.
The U is different than any other school.
I’m afraid of sharks. My family came to visit this summer and we rented a boat and we’re out in the middle of the ocean and I jumped in. That was probably the scariest thing I’ve ever done.
After college I want to play professional basketball.
One thing everyone should know about Miami Basketball is that we’re all brothers and we like to have fun.
At The U, I’ve learned so much from my teammates as a whole. I couldn’t pick just one person because you learn different things from everyone.
I March I want to still be playing basketball in the tournament.
I never thought I would actually be going here. Growing up I always liked Miami because of the jerseys, I’m not going to lie, but I never thought I would actually be here right now when I was really young.
Before every game I need to pray.
My favorite song lyric is … I honestly have a problem remembering song lyrics so I can’t come up with one on the top of my head. I get that from my mom. She’s the same way (laughs.)
My favorite midnight snack is Cheez-Itz
Coach Larranaga is a great coach who I believe is going to take us to that next level.
My favorite movie is  The Dark Knight.
The teammate that would win Dancing with the Stars is Malcolm Grant because he’s the one dancing all of the time, being silly.
The teammate that would win American Idol is Julian. I‘ve never heard anybody else sing but Jules so I would have to give it to him.
The actor I would want to play me in a movie is someone who semi-looks like me to play me. I would have to pick someone who’s light-skinned so either Terrence Howard or Will Smith. Maybe Terrence Howard since he has light eyes.