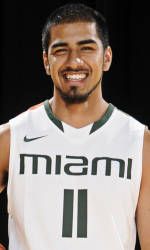 I was raised in Seattle, Wash., particularly in Skyway, Wash. It’s a smaller city right outside of the city.

I started playing basketball when I was five years old. I started out rec league and just playing in the backyard with my cousin Josh. We would always watch Michael Jordan in the playoffs and go right outside and try to imitate what he did in the games.

My favorite holiday is Christmas. It’s right after my birthday and I just like the feeling of everybody giving presents and getting presents. It’s good to see everyone smiling.

Nobody knows that I can barbeque. It’s something that I’ve been working on. I’m learning from my dad, he’s a great cook and I just love barbeque, too.

To be a Miami Hurricane means to walk around with pride knowing that The U has so much tradition; so many great players have come through this university, not only players but individuals in society as well.

The oddest nickname I’ve ever had is Ry Guy 3000. It was made up in seventh grade. I don’t remember how it came to be but it stuck for the rest of the school year.

Right now I’m listening to Kendrick Lamar. He’s a new up-and-coming artist out of LA and he’s trying to bring West Coast music back and I’m from the West Coast so I’m excited about that.

If I wasn’t playing basketball I would be still at the University of Miami. I was a walk-on but I would be trying to do more as far as with my degree since I had more time on my hands. Probably different internships.

When I was younger I wanted to be a congressman. My grandpa always used to ask me that and I always gave him the same answer. Now I’m nowhere near interested in being one.

My favorite current UM athlete is Jacory Harris because he’s been under a lot of scrutiny but he still does what he’s supposed to do on and off the field. He’s very resilient and carries himself like a young man.

After college I want to hopefully get a good paying job but ultimately I want to open up a youth community center back home and help out all of the youth.

One thing everyone should know about Miami basketball is that we’re here to stay. Coach L has created a strong foundation so far and I believe that it will carry on into the future and we’ll be a great basketball program as well.

My favorite midnight snack is peanut butter and jelly, strawberry jelly to be exact. I don’t just make a regular sandwich, I have to make it double decker because I always end up making two sandwiches in one at the same.

My favorite movie is Apocolyto. It’s a great movie its about the Mayans back before pre-Columbus. It’s just really captivating to me.

The actor I would want to play me in a movie is Al Pacino. I’ve grown to like Al Pacino and I’ve been watching a lot of his movies and I think he’s one of the greatest actors ever so I think that would be great.