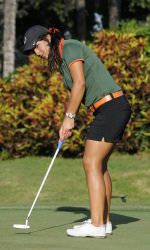 In their final tournament of the fall season, the Canes shot a 304, which put them in 16th after round one. However, Miami head golf coach Patti Rizzo felt her team could have played better.

“The course played very easy today and we did not capitalize on that,” said Rizzo. “I am not sure what went wrong, but we are very disappointed.”

Ras-Anderica and Jennifer Hirano led the way for the Canes. Hirano shot a three-over par 75 and recorded par on 15 of the 18 holes.

Ras-Anderica fired an impressive two-under par 34 on the back nine – including three birdies in her final six holes. Her score of one-over par was good for 41st on the day.

Hirano’s score was good for 55th place on the day.

Freshman Rika Park shot a four-over par 76 after the first 18 holes. Park scored par on 12 of the 18 holes and delivered a birdie.

Senior Patricia Arana shot an eight-over par 80 on the day, including birdies on the second and 14th holes, respectively. Sophomore Carina Cuculiza shot an 11-over par 83 in her second tournament of the fall season.

Play at the Las Vegas Collegiate Showdown continues with second round action Tuesday. You can follow all the action at golfstat.com.