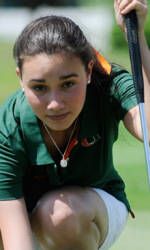 Park and Leticia Ras-Anderica had the best showings for the Canes. Ras-Anderica shot a six-over par 78 which included three birdies.

Park is now 10-over par on the tournament and shot a one-over par 37 on the front nine Saturday. She was able to register par on 14 of the 18 holes.

Park and Ras-Anderica are both tied for sixth place.

Senior Jennifer Hirano shot an eight-over par 80 and is +17 for the tournament. Hirano delivered 11 pars and is currently tied for 32nd.

Sophomore Carina Cuculiza shot a 13-over par 85 on the day and senior Patricia Arana shot a 17-over par 89, including two birdies.

Play at the Bettie Lou Evans Fall Invitational concludes with the final round Sunday. You can follow all the action at golfstat.com.