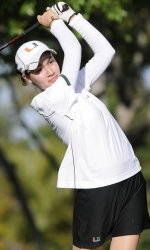 In their third tournament of the year, the Canes shot a 314, which was good for third on the day.

“We are disappointed in our play today,” said UM head women’s golf coach Patti Rizzo. “We made a lot of silly mistakes but the course played really difficult. While saying that, we are in third and only a few shots from first. The girls feel they can do much better tomorrow.”

Ras-Anderica had the Canes first eagle on the fifth hole and shot a one-over par 37 on the front nine. She is tied for fifth in the tournament and was able to score par on 13 of the 18 holes.

Park’s score was good for seventh for the day.

Senior Patricia Arana shot an eight-over par 80 after the first 18 holes. Arana registered a two-over par 38 on the front nine and is currently tied for 26th.

Senior Jennifer Hirano shot a nine-over par 81 on the day, including a birdie on hole 17. Sophomore Carina Cuculiza shot an eleven-over par 83 in her first action of the season.

Play at the Bettie Lou Evans Fall Invitational continues with the second round Saturday. You can follow all the action at golfstat.com.