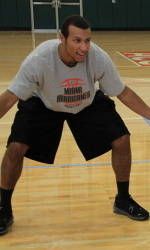 It was coach Larranga’s first clinic as the Hurricanes head coach and in an effort to engage and help his new community, the clinic was made free to the public. As 3 p.m. neared Coach L. prepared to meet the fans of his new program.

For two hours, Larranaga, the players and his staff coached the kids through the many drills and stations that were set up in the practice facility. Activates ranged from defensive stance and passing drills to lay-up stations and speeches from Coach L.

While basketball fundamentals are always important, Larranaga and company stressed values such as teamwork, effort and sportsmanship.

By the end of the day, Coach L. stood in front of all the exhausted but happy children and brought the days activates to a close. A great turnout and full participation from the Hurricanes basketball program made this year’s clinic a great success.