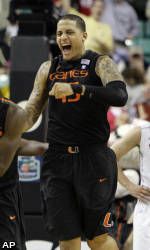 “We feel awful for Julian Gamble,” said UM head coach Jim Larranaga.  “Tearing your ACL is a devastating injury at any time in your career, but particularly in your fifth year of eligibility. Julian is a bright, hard working and competitive athlete. We will do everything we can to support him in his efforts to rehabilitate this injury. We know he will also be there supporting his teammates, becuase that is just the kind of person he is.”

His fellow bigman Reggie Johnson underwent surgery on June 30 to repair a torn meniscus in his right knee.  Johnson was expected to be sidelined for 5-6 months from the date of the surgery.

The 6-10, 305-pound center from Winston-Salem, N.C., tested the waters of the NBA Draft last spring and elected to return to the Hurricanes for his junior season in 2011-12. As a sophomore in 2011, Johnson was Miami’s leading rebounder and third-leading scorer, nearly averaging a double-double with 11.9 points and 9.6 rebounds per game.

The Canes now have two post players injured as the college hoop season quickly approaches.  UM will rely heavily on redshirt-sophomore center Kenny Kadji, who will be eligible to play this season after transferring from the University of Florida.

The 2011-12 season is the first under new head coach Jim Larranaga.  Larranaga brings a national following and lengthy resume to the BankUnited Center.