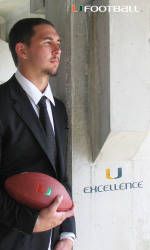 Behind the Facemask: Chase Ford

CORAL GABLES, Fla.–There are moments and decisions in every person’s life that shape who they eventually become. Every path is different, but for these student-athletes, they have all eventually led to Coral Gables. Their stories in their words…

My middle name is Chase and my first name is Jordan. They always called me Chase when I was little so it stuck.

When I was six years old, I was getting ready to take a bath and I jumped off the toilet and slipped and busted my head. That’s how I got the scar above my eye. I think I got five or six stitches.

Texas is family and friends. I think of the country, I think of sitting around, not doing anything and not worrying about it.

Playing football has given me a lot of advantages in the classroom, in life, and in everything.

I secretly wish that my mom could move down here with me.

Transferring to Miami was a whole different experience, but probably the best decision of my life as of right now.

Playing tight end is fun. A lot of guys on the tight end group get together and we have a good time, it’s a pleasure to be around them. It’s the U, “Tight End U.”

At the end of my 10th grade year, my youngest brother needed special help in school. They didn’t have the kind of attention he needed at the school I was at, so all of us moved to a new school. Me and the new head coach were talking and he asked me what positions I played. I said quarterback and free safety. He said, “That’s good, but here you’re playing tight end and defensive end, so go get your pads and get ready.” That was that (laughs).

Coach Carroll is a real good guy. He’s an up-tempo guy. He’s always bouncing off the walls, always upbeat. He’s a fun guy to play for. He’s taught me a lot and developed my game to become a better football player.

There’s going to be a lot of competition at the tight end position this year. Blake Ayles who transferred from USC is good, Asante Cleveland played in a few games and did real well, Clive and Billy are good too. I really don’t think of it from a competitive edge, but I think of it as going out there, doing what you have to do, getting your job done to the best you can do it, and have fun when you do it. Whoever plays will be the best player.

The Golden Era just started, but between now and the time he’s done, I’m sure he’ll have a few National Championships under his belt, hopefully this year to start it off. It seems like he has a good plan.

This is my first spring of playing college football, so I didn’t really know what to expect coming in. It’s a different atmosphere from last year. Waking up at 5:30 a.m. for workouts and the new posters in the locker rooms with guys like Ray Lewis saying stuff, it’s kind of different but it’s fun. It’s been a learning experience, because they’ve put more on us this year than they did last year.

I wouldn’t be here without my family. From grandparents to my aunts to my parents and my brothers. When I’m down, they’re my driving force. They always have my back. I love them and would do anything for them.

My mom told me when I was little, she asked me what I wanted for Christmas and I said a dad and a little brother. My mom got married on December 10th, and my little brother came on July 2nd. I got both presents.

I didn’t think I’d be here playing football, because when I was 14, I was taken to Texas Children’s Hospital for a long time with a bad staph infection. The doctors told me I was lucky to be alive, and that I would never play football again. I guess I proved them wrong. They said I wouldn’t play football again because it was too big of a risk. After the third or fourth game of the next season, when I went back to the hospital, they cleared me to play. God’s blessed me.

When I was younger, basketball was my sport. I didn’t like getting hit. But when I couldn’t play football, I wanted to. When they cleared me, I came back and was so excited to play. I played quarterback and threw like three interceptions right away (laughs).

I was raised to do right, be respectful. My grandpa was a principal and worked out at a state school helping with special education. My grandmother just retired as a teacher. I was raised by them until I was five, brought up on good morals. They taught me right from wrong.

The U is about winning, legacy, and teamwork. It’s about family and we see it each day with the NFL guys coming back to talk to us or to work out. The first player that came back that I remember seeing was Willis McGahee. It was cool, because you think how he plays on television and in the NFL. After awhile, you start to realize they’re people like me and you. Yeah, they play in the NFL and yeah they’re great players, but they’re regular people. Most people think all athletes are stuck up and all that, but not these guys.

We are all in it together, ready to win. From the weightlifting sessions to the spring practice, one person can’t do it by himself. This isn’t a high school basketball game. You need teamwork to accomplish your goals.