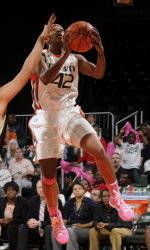 Johnson Deserves to be ACC Player of the Year

CORAL GABLES, Fla. – Her numbers jump off the page to a point where it almost becomes laughable how dominant she has been this season. Her production – and maybe more importantly her leadership – is the reason the 12th-ranked `Canes will be playing for a share of the Atlantic Coast Conference regular season title when they face Georgia Tech on Sunday.

Junior guard Shenise Johnson is why the `Canes are where they are today. She’s also the reason that this team has gone from being dead-last in the ACC a season ago to 25-3 overall, 11-2 in ACC play and assured a first-round bye in next week’s ACC tournament.

It is hard to imagine any other player in the conference having anywhere as close an impact than the one Johnson has had on the Hurricanes. Let’s take a look at the facts.

She leads the ACC with an 86.6 free-throw percentage. No one is even close.

She is tied with her teammate Morgan Stroman for an ACC-best 3.3 steals per game.

Want me to keep going?

She is shooting over 50-percent from the field despite constant double teams.

24.0 points per game, 7.8 rebounds per game and 4.2 assists per game. Those are her averages in UM’s last five games in wins over No. 12 Maryland, No. 10 North Carolina, Boston College, Wake Forest and No. 14 Florida State.

She is averaging 21.7 points per game in ACC play, which ranks second only to teammate Riquna Williams, who could arguably win ACC Player of the Year if it weren’t for Johnson’s ridiculous season.

There are other ACC POY candidates – most notably Jasmine Thomas from Duke – who have a better supporting cast yet the production isn’t there. Of the eight most-looked-at statistics to gauge success and productivity – field goal percentage, three-point percentage, free-throw percentage, rebounding, assists, blocks, steals and points – Johnson leads Thomas in seven of them.

And a lot aren’t even close.

But look at some of the other statistics that might go unnoticed. Johnson has 91 steals this season to Thomas’ 70. She is shooting over 10-percent better than Thomas (50.3-to-39.5) from the field and in ACC play, Johnson averages over three more rebounds per game (7.8-to-4.1) than the senior at Duke.

Ultimately though, this isn’t about Johnson vs. Thomas or Johnson vs. Williams. It’s about what Johnson has done and what she has done to her team. It’s about how different she is than the 150-or-so other players that have stepped on the court this year across the ACC.

She is rare…a once-in-a-decade type of talent. Just think about how hard it is to rank in the Top 10 in points, rebounds and assists, let alone all of the other categories she dominates. Nobody in the NBA comes close to ranking in the Top 10 in those three categories, not even LeBron James. Nolan Smith is the clear cut ACC Player of the Year on the men’s side and he isn’t anywhere close to the Top 10 in rebounding.

Johnson is clearly unique. A player like her only comes around so often. A season like the one she is having is even harder to find.

The 2010-11 ACC Women’s Basketball Player of the Year will be announced on Thursday, the same day the `Canes will be enjoying their first round bye in the conference tournament.

Her teammates should be thanking her now and celebrating her on Thursday.