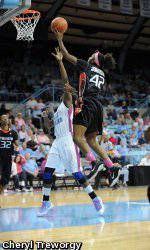 Morgan Stroman scored 19 points and Riquna Williams finished with 18 as the Hurricanes won their 24th consecutive home game and avenged a 66-59 loss at Florida State on Jan. 24.

Courtney Ward’s two free throws cut Miami’s lead to two with 4:02 left but the Hurricanes responded with an 18 consecutive points. Williams and Stefanie Yderstrom each had a key 3-pointer in the surge.

Miami stayed in the running for the ACC title with the victory. The Hurricanes close out the season Sunday at Georgia Tech.