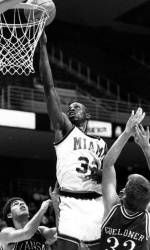 If the University of Miami’s men’s basketball program was resurrected in 1985, then Eric Brown was its savior. By the time of his arrival, UM basketball had already accumulated a storied history. Founded in 1926, it had withstood the Great Depression and weathered a three-year hiatus during World War II. In the 1950s and 60s the program entered a Golden Era under head coach Bruce Hale and scoring phenomenon Rick Barry during which the team recorded 13-straight winning seasons from 1954-67 and averaged an astonishing 98.4 points per game during the 1964-65 campaign. Upon Brown’s mid-80s arrival to Coral Gables, however, Hurricanes Basketball was in its own version of the Dark Ages.

The success of the 1950s and 60s had faded, and by 1970, inadequate facilities, financial troubles and low attendance had all but convinced the University of Miami Board of Trustees to shut down the men’s basketball program. In protest, Will Allen, the first African American basketball player for UM, organized a player strike citing that the team had not been given sufficient notice in order to attempt to transfer to different schools. Agreeing, the board of trustees allowed for the continuation of the program for an additional year, but in 1971 the board of trustees voted to discontinue the men’s basketball program “temporarily until such time as a permanent field house can be constructed on the main campus.” On April 22, 1971, Miami basketball was indefinitely suspended.

For 14 years, Hurricane basketball lay dormant — silent — collecting dust, forgotten and abandoned. A revival lay on the horizon, however, starting first with the hiring of former Washington State athletic director Sam Jankovich on July 15, 1983. Jankovich announced his intentions to immediately restore the university’s men’s basketball program, enabling UM to have “one of the nation’s most complete and visible overall programs in the country.” On Oct. 12, 1983, the University of Miami Board of Trustees unanimously voted to reinstate men’s basketball, and five months later Bill Foster was named the university’s seventh men’s basketball coach. Sam Jankovich reaffirmed his commitment to the program a year later when he announced that a one million dollar practice facility would be constructed on the Coral Gables campus. On Nov. 22, 1985, Hurricanes Basketball took to the court for the first time in nearly a decade and a half.

Enter 6-6 forward Eric Brown, a native of Brooklyn, N.Y., whose aspirations to play collegiate basketball were manifested in an offer from the newly-hired Foster. Brown joined a team that consisted of nine freshmen, one sophomore and one junior — collectively coined by the media as “America’s Youngest Team”.

What followed were four seasons in which Brown solidified himself among the greats of UM Basketball. His 2,270 points made him the second-highest all-time scorer in UM history behind All-American and eventual All-NBA star Rick Barry. Brown scored 30 points on nine occasions and eclipsed the 20-point mark 54 times. He still holds UM career records for field goal percentage and field goal attempts, having made 53.5 percent of his shots from the floor in addition to recording 840 free throw attempts in his four-year career. His 24.7 scoring average as a senior in 1989 is still the fifth-highest by a Hurricane player, and under his leadership the Hurricanes amassed a 65-56 record, including 19-12 mark in his senior season.

Now, 22 years later, Brown adds another title to his already impressive resume: Legend. On Jan. 25, 2011, it was announced that Brown will be honored by the Atlantic Coast Conference as a member of the 2011 ACC Basketball Tournament Legends Class. Brown, along with the rest of the 2011 Legends Class, will be honored at this year’s ACC Men’s Basketball Tournament in Greensboro, N.C. at the annual ACC Basketball Legends Brunch on Saturday, March 12.

Brown was inducted into the University of Miami Athletic Hall of Fame in 2001, alongside none other than former UM Athletic Director and catalyst behind the resurrection of Hurricane basketball Sam Jankovich.