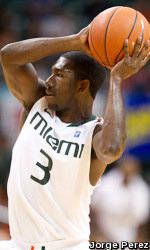 Miami Gets One It Badly Needed

CORAL GABLES, Fla. – Finally, a close one went the way of the `Canes. Maybe this was the game Miami needed to get out of its funk. Maybe, just maybe, all the end-of-the-game losses that have been going against the `Canes can finally be put in the past.

The Hurricanes beat visiting Georgia Tech, 59-57, at the BankUnited Center in what was the final game of the first half of Miami’s regular season ACC schedule. The win for UM (13-9, 2-6 ACC) was just its second in league play this year, thanks to back-to-back-to-back really close losses that went in the wrong team’s favor.

That frustrating feeling we have experienced watching the `Canes play recently felt like it would never go away. It wasn’t that the `Canes were playing poorly. In fact, they were putting themselves in situations to win no matter the location and no matter the opponent. It was simply an unfortunate trend of not finishing games the way they are capable. Plain and simple.

Thursday night, however, it finally came to an end. The Hurricanes built a comfortable lead but Georgia Tech battled back, putting the game in doubt in the game’s final minutes.

Fortunately for everyone in the arena – especially the guys in white on the BankUnited Center floor – the `Canes came out on top.

It was exactly what they needed after such a harsh January. Maybe February will bring better times.

Maybe the `Canes will go on a run like they did three years ago when they were one of the hottest teams in the country in calendar’s second month.

Maybe Malcolm Grant will continue to prove he is one of the best guards in the league.

Maybe Garrius Adams will continue to build upon his recent scoring barrage.

We know Reggie Johnson is going to do his thing in the paint. That is a given. The big man is up there with Maryland’s Jordan Williams and Virginia Tech’s Jeff Allen as one of the best big men in ACC.

Ultimately though, it’s just a matter of finishing, something the `Canes have struggled with but showed Thursday they are capable of doing.

If this team is going to go anywhere in March, it is going to have to win close games against really good teams. They don’t call it March Madness for nothing.

How does the old sports cliché go? The true test of a team is the way it handles adversity?

The `Canes have a chance make their mark going forward, and it started in waning seconds Thursday night in Coral Gables.

Maybe next time they’ll win one by double-digits and help us all breathe a little easier.