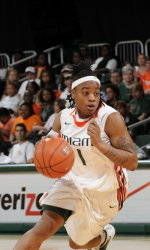 Mo Bennett’s jumper with six seconds left in regulation tied it 70-70. Johnson had a chance to win it but her jumper with one second remaining hit the side of the rim.